The men’s basketball team captured the Captains Shootout Championship over the weekend, winning a pair of thrilling games over the Methodist University Monarchs (N.C.) and the Christopher Newport University Captains (Va.) to move to 3-2 on the season.

The Eagles began play on Saturday with a 97-91 win over the Monarchs. Neither team could create any sort of a cushion in the opening minutes of play, as Methodist held a slim five-point lead early that disappeared on a put-back from Josh Schattie off a miss from sophomore forward Will Trawick with 11 minutes left in the half. The teams traded baskets, then the Monarchs responded with a 10-2 run to go up 27-19, their biggest lead of the game.

A layup in the final minute of the half from junior guard Michael Florin helped to cut into the lead. The Eagles faced a seven-point deficit entering the half, trailing the Monarchs 43-36.

The lead disappeared almost instantly. Schattie opened the second half with a steal and a layup, and senior forward Jake Davis followed with a jumper to cut the margin to three. After Schattie sunk two more layups and Davis hit two free throws, the Eagles claimed a 46-45 edge, their first lead all night.

The teams battled back and forth, neither able to gain any separation until Trawick nailed a three-pointer at the 8:04 mark to put the Eagles up 77-69. The Monarchs chipped away at the lead and managed to cut it to five points on a three-pointer with 1:29 left, but Davis sunk a pair of free throws to give Emory an seven point

Methodist wasn’t done. A three-point play cut the Eagles’ lead to just 89-85 with just over a minute to play. Davis once again nailed two free throws to extend the lead to six points, but the Monarchs answered with a jumper to make the score 91-87 with 36 seconds left on the clock.

Forced to foul, the Monarchs put senior guard McPherson Moore on the line, who made both of his free throws to effectively ice the game and let the Eagles escape with a hard-fought victory.

Davis led the Eagles with 28 points–including a perfect 15 for 15 for the line–while Trawick added 24. Schattie and Moore also landed in double digits with 14 and 13 points, respectively. Davis also led with eight rebounds, while Florin was top in assists with 10.

The Eagles’ Sunday match with Christopher Newport was another high-scoring contest, as Emory held off the Captains 92-90. CNU held an early advantage until junior guard Davis Rao drained a three to tie the game at 14.

At the halfway point in the first half, Davis gave the Eagles their biggest lead yet with a pair of three throws to put them up 27-23.

The Captains closed to 40-38 with three minutes to go in the half, but the Eagles responded with an 8-1 run punctuated by a Davis jumper to go into halftime up nine points.

The Eagles’ lead was as large as 18 points in the second half after a Davis three-pointer, but CNU came roaring back.

A three-pointer with six minutes to go brought the Emory lead back to single digits, and a three-point play with 3:45 on the clock cut the score to 86-84.

Davis answered with a pair of free throws and Moore sunk a layup to extend the lead to 90-84, but the Captains went on a 6-0 run to tie the game with just 44 seconds remaining. Moore nailed a jumper with 12 seconds left, however, serving as the game-winner when CNU missed a layup in the final seconds of play.

Davis led the Eagles with 34 points, while Moore added 22. Florin had another solid game as well with 12 points and eight assists.

The Eagles will next play on Saturday against Maryville College (Tenn.) at 3 p.m. in LaGrange, Ga. 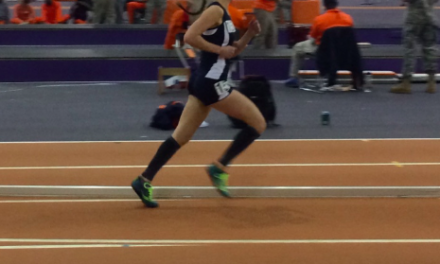 Step by Step: The Fortitude of Aileen Rivell