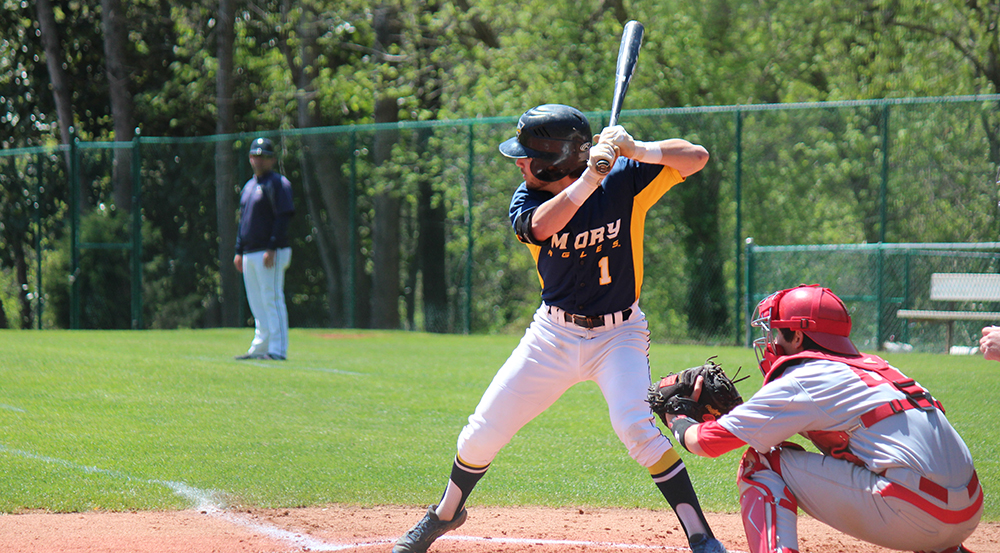 Junior Dylan Eisner prepares to hit the ball against the Huntingdon College (Ala.) Hawks. Eisner and the Eagles won all three games against the Hawks, one at Huntingdon and the other two at home. | Mark Spicer/Staff

The Emory University baseball team swept a three-game series against the Huntingdon College (Ala.) Hawks with scores of 13-2, 6-4 and 6-4 this weekend.

The Eagles have been on a strong streak lately, despite a bumpy start to their season, winning six of their last seven games and bringing their record to 19-10 for the season.

The first game was held away, at Huntingdon, and on Saturday, both teams traveled back to Atlanta to play at Emory for the last two games.

The Eagles started the game strong. In the top of the first, Lake hit a single RBI to bring Coble home. In the second inning, Emory’s offense combined with a lackluster Hawk defense allowed the Eagles to pick up five more runs. With three walks, a wild pitch and a passed ball, it wasn’t hard for Emory to have a high scoring inning. Emory’s offense was impressive, as well, with Chambers and Vizvary each hitting RBIs.

Despite a solid offensive two innings, the game’s momentum shifted back to the Eagles in the top of the fourth due to the weakness of the Hawk’s defense. A walk and a wild pitch lead to an unearned run for the Eagles along with a RBI by sophomore infielder Phillip Maldari to bring the score to 8-2.

The Eagles continued to play well both offensively and defensively, giving up only two more hits in the following four innings. The Eagles were unable to make anything happen in the fifth inning, but continued their offensive onslaught in the sixth and seventh innings. Maldari hit a two run double in the sixth, followed by a ground out RBI by senior infielder Jordan Selbach bringing the score to 11-2. Two walks in the seventh inning allowed Lake to bring Coble and Young home with a two run double, bringing the game to its final score of 13-2.

The second game against Huntingdon was much closer. Once again, the Eagles had a terrific opening, with five hits and four runs in the first inning. It appeared as if Huntingdon’s unreliable defense would lead to another high-scoring Eagle blowout with the second inning beginning with bases loaded, no outs. Coble was able to secure Emory’s first run due to Vizvary’s RBI single. Maldari then hit a RBI single, allowing Eisner to score. Peacock was able to bring Vizvary home on a sacrifice fly. Chambers finished up the inning with a RBI single, bringing the score to 4-0. The Eagles continued their run in the second inning with Vizvary hitting another two-run double bringing the score to 6-0.

“[Maldari] has been killing it this year,” Lake said. “He doesn’t stop putting up doubles. [Eisner] also had a great year. It wasn’t a surprise they continued to perform so well.”

Huntingdon had a solid third inning, scoring three runs and bringing the score to 6-3. However, they were unable to continue the momentum and defenses remained strong for the rest of the game with a total of four hits from the bottom of the third to the bottom of the sixth. In the seventh inning, Emory’s defense faltered. With the assistance of a wild pitch, Huntingdon was able to score bringing the score to 6-4. Off a throwing error, Huntingdon was able to secure runners on first and second base. However, it was unable to convert and the score remained 6-4 in the Eagles favor.

The final game was once again dominated by the Eagles’ offense, with Emory winning 6-1. After an uneventful first inning, Emory was able to score two runs in the second. Selbach brought Vizvary home with a ground out. Maldari scored off a fielding error.

Both teams played solid defense, not letting either side have any real scoring chances until the bottom of the fifth, when Eisner was able to a hit a RBI double, and bring the score to 3-0. Emory had a strong sixth inning, scoring three runs. Chambers hit a single RBI, as did Morgan. Chambers was able to score Emory’s final run by scoring on an attempted steal. Huntingdon scored a run in the bottom of the sixth, but couldn’t catch Emory’s six-run lead.

“What we need to focus on is playing consistently,” Lake said. “We need to make the routine play and hit the ball. If we can continue doing that and if we get to play offs, we can make a real run at it.”

The Eagles are set for a home game against the Berry College (Ga.) Vikings, at 3 p.m. today, and will travel to Oglethorpe University (Ga.) tomorrow, April 8, for a 7 p.m. game.