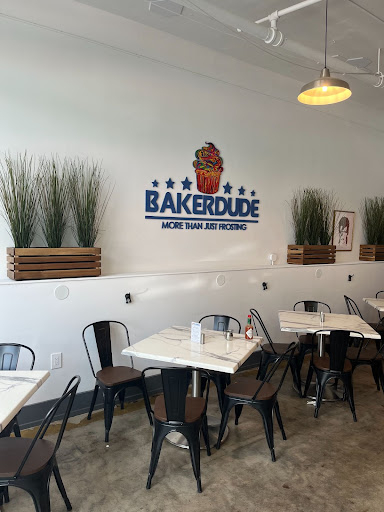 In recent years, the landscape of Emory Village has been in a constant state of flux, with new eateries replacing more established ones due to financial struggles experienced during the height of the COVID-19 pandemic. Located next to All Fired Up and the vacant Lucky’s Burger and Brew is the Village’s latest addition: Baker Dude, a bakery and eatery that boasts a wide variety of sweet treats and breakfast foods.

Baker Dude was founded in 2015 by Orran Booher, an avid baker who sought to turn his passion into a career. In addition to the storefront in Emory Village, Baker Dude has locations in Chattahoochee Food Works and The Beacon Atlanta.

I stopped by Baker Dude on August 26 to grab a late lunch with a friend. The restaurant was quite empty with only one other table being occupied, perhaps because it was later in the afternoon or since the location opened only last April . The dining area is spacious and decorated minimalistically with white and black tables and chairs. Modern art paintings adorn the walls, creating a casual ambience.

Initially, I was keen on having a heartier meal like the BBQ Sloppy Jack Sandwich made with slow simmered BBQ jackfruit and The Mighty Egg Bowl—a brunch bowl with eggs, sprouts, toast, sun-dried tomato pesto, chickpeas, avocado slices and pickled onions. However, I was told that the chef leaves an hour before closing time at 3 p.m. on weekdays, so only sandwiches or meals that could be readily assembled were served. As a result, I opted for the Overnight Oat Bowl, the “Ah-Vocado” Toast and an apple crumble muffin, the former two being great options for gluten free and vegan customers. 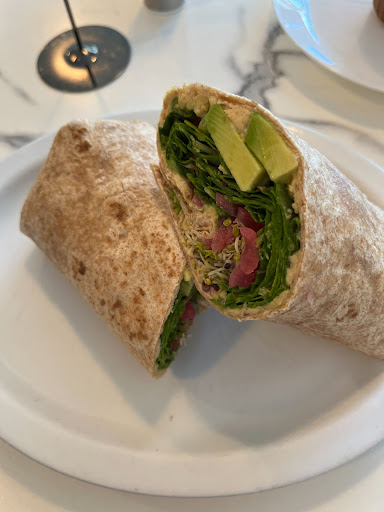 The “Ah-Vocado Toast,” wrapped in a whole wheat tortilla wrap, is one of several unique breakfast options with a twist at the new restaurant, located in Emory Village. (Krithika Shrinivas / The Emory Wheel.)

The “Ah-Vocado” Toast, which came out first, was a unique twist on this popular breakfast item. It came in a whole wheat tortilla wrap and was topped with avocado, arugula, hummus, pickled onions and mung bean sprouts. This dish was light, tangy and fresh, with the wrap making it a suitable option for lunch as well as breakfast. Although it differed slightly from its menu description, lacking balsamic glaze and heirloom tomatoes, it was still delectable and a refreshing take on the classic avocado toast recipe. 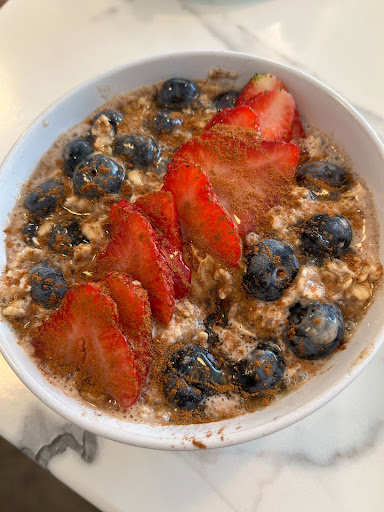 As I had never had overnight oats before, I was excited to try their recipe, and it did not disappoint. The bowl of oats came with almond milk, a hint of sea salt and cinnamon and was topped with berries, chia seeds and a dollop of peanut butter. I chose to have mine served warm, making this a great option for a cozy breakfast in the fall. The oats were rich and creamy with a perfect amount of sweetness from the fruit, which was balanced out by the salty peanut butter, creating a well-rounded and nutritious meal.

To add to my sugar rush, I also tried the apple crumble muffin to get a sense of the baked goods. The muffin was among the freshest I have ever had, staying true to Baker Dude’s vision of sourcing fresh ingredients to make their baked goods. There were pieces of fruit with every bite, and the sugar sprinkles added texture to the top.

Overall, Baker Dude offers an array of tasty baked goods along with breakfast and brunch foods that make it a perfect Saturday morning brunch spot with friends. It is particularly a solid option for those who are vegan, vegetarian or have a gluten allergy, as the menu has plenty of variety and offers substitutes as well.

There were some hiccups in the service, such as having to send back a dish with an ingredient I had asked to be omitted.  Still, I believe that this can be chalked up to the establishment being new and did not largely detract from the dining experience. If you’re looking for a new place to get brunch or grab a quick bite, I would definitely recommend checking out Baker Dude!