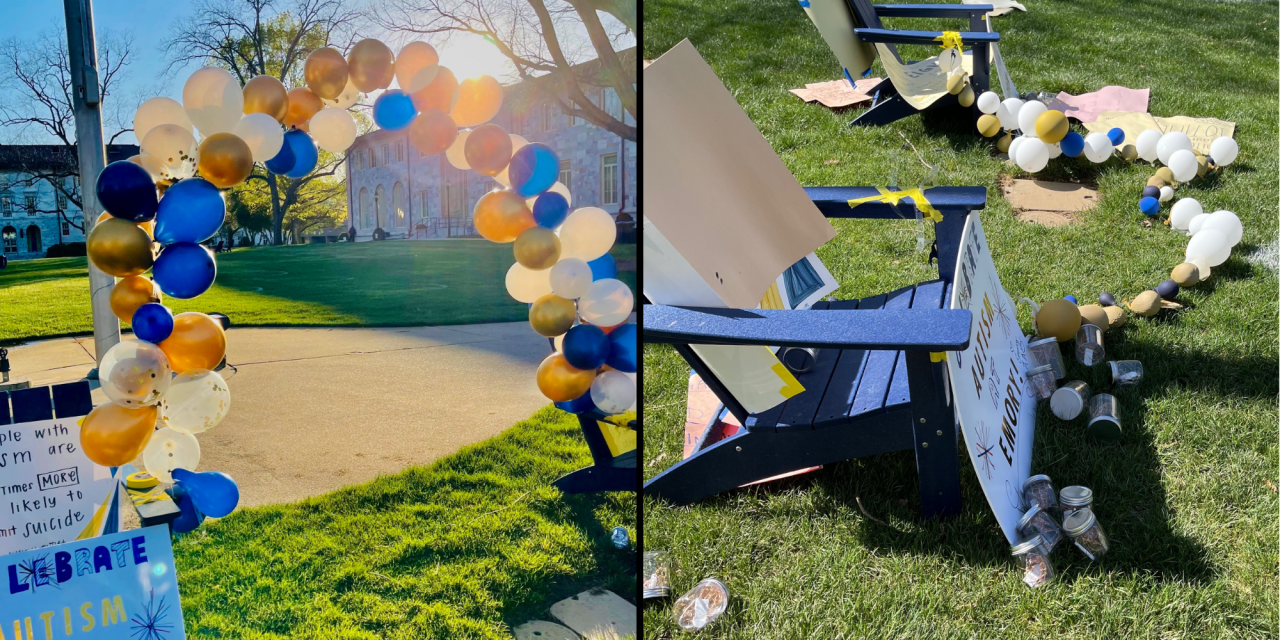 A blue, gold and white balloon arch stood in the middle of the Quad on April 1 to attract students to Emory Autism Awareness Organization’s (AAO) “Light It Up Gold” display. Posters spreading autism awareness populated the grass, with a different fact about autism placed in each social-distancing circle. Mason jars filled with Emory-colored lights were placed atop each poster, illuminating the Quad in Emory colors at dusk.

By the time Holly Shan (18Ox, 21C), president of Emory Autism Awareness Organization, returned to the Quad to take down the display on April 4, the posters were ripped apart, the display covered by others’ posters and the balloons deflated and torn down. Shan says this wasn’t surprising.

“Holly was there the next morning and she FaceTimed me and she’s like, ‘you’re never gonna believe what just happened,’” Henry Blair (23C), co-vice president of the organization, said. “Everything has just been messed with, and it was very clear because there was no inclement weather that weekend and those jars were placed over the posters.” 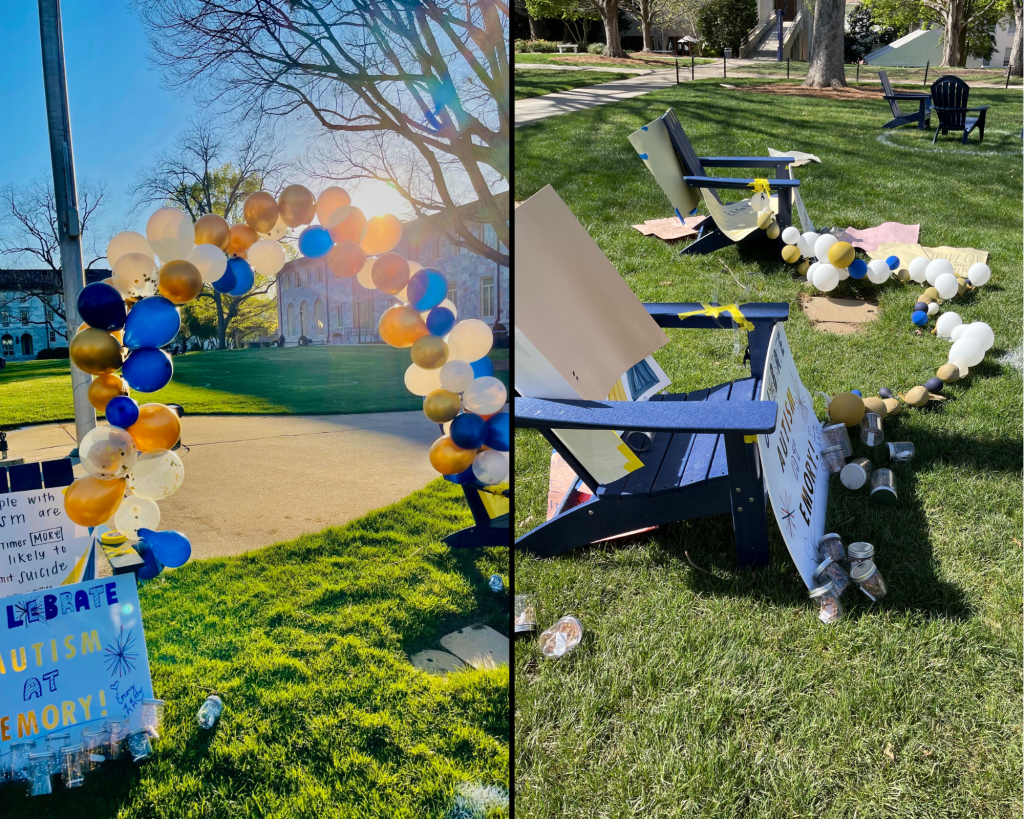 Emory Autism Awareness Organization (AAO) put up their “Light It Up Gold” autism awareness display on April 1 (left). When AAO president Holly Shan (18Ox, 21C) went to clean up the display on April 4, she found it vandalized (right). (Courtesy of Holly Shan)

Shan explained that vandalism to AAO’s display happens every year because students think the club is still organized with Autism Speaks, which it is not.

Autism Speaks has received widespread backlash for countless reasons, such as alleged misallocation of funds. People claim that less than 4% of their budget goes towards family services and some of their funds are aimed at autism causation research, like extensive genomic research, rather than quality of life improvements. The organization has also been directly linked to the anti-vaccination movement. Another criticism of Autism Speaks is that they have more corporate executives from major companies like White Castle and Goldman Sachs on its Board of Directors than people with autism.

“No one’s opposed to autism but a lot of people are opposed to Autism Speaks, so I kind of rebranded our organization from the Autism Speaks U into something totally different, which is just an Emory-funded club,” Shan said.

Although the perpetrators remain unknown, Erin Neely (19Ox, 21C), vice president of education and who is on the spectrum herself, said vandalism is never the answer to a disagreement.

“We don’t know who did this, whether it was an autistic student or some neurotypical trying to be an ally, but either way, it was not helpful,” Neely said. “I’m a self advocate, but I also know it’s important not to burn bridges with parents and professionals. We need to be mindful of problematic affiliations, but people shouldn’t be having knee-jerk reactions to student poster displays.”

Although there is controversy with Autism Speaks, Blair said much of it is misplaced and that doesn’t excuse the vandalism of the club’s display.

“I wouldn’t even be very upset if they had just written their own posters and put them right next to ours,” Blair said. “You’re not supposed to do that, but that’s not the end of the world. It’s the fact that they went out of their way to destroy what we were doing without even knowing who we are, what we are and what we’re trying to solve.”

The posters that the vandalizers put over AAO’s posters shared the controversies surrounding Autism Speaks. One poster read “only 4% of auti$m $peak$ budget goes to supporting autistic people.” AAO responded to that claim by saying “84 cents of every dollar that is donated to Autism Speaks or given via grants are directly allocated to autism research or services” in an April 4 Instagram post.

Because the club created an Instagram post sharing their response to the vandalism and addressing the “misconception[s]” expressed on the vandalizers’ posters, Shan said the club decided to not take any further steps in confronting the vandalizers, such as filing a bias report.

Three members of the Autism Speaks Board of Directors also reached out to thank the club for their post and the professional way they handled the situation, Shan said.

“Not only did we respond to each poster, we also said something along the lines of, ‘Listen, we hear you and we don’t disagree with you and we would love to teach you more about how you could speak about these things in the correct way,’” Blair said. “If they were passionate about this, they should join our organization and should not be vandalizing it because we’re on the same side.”