Atwood: The Classrooms of the Future 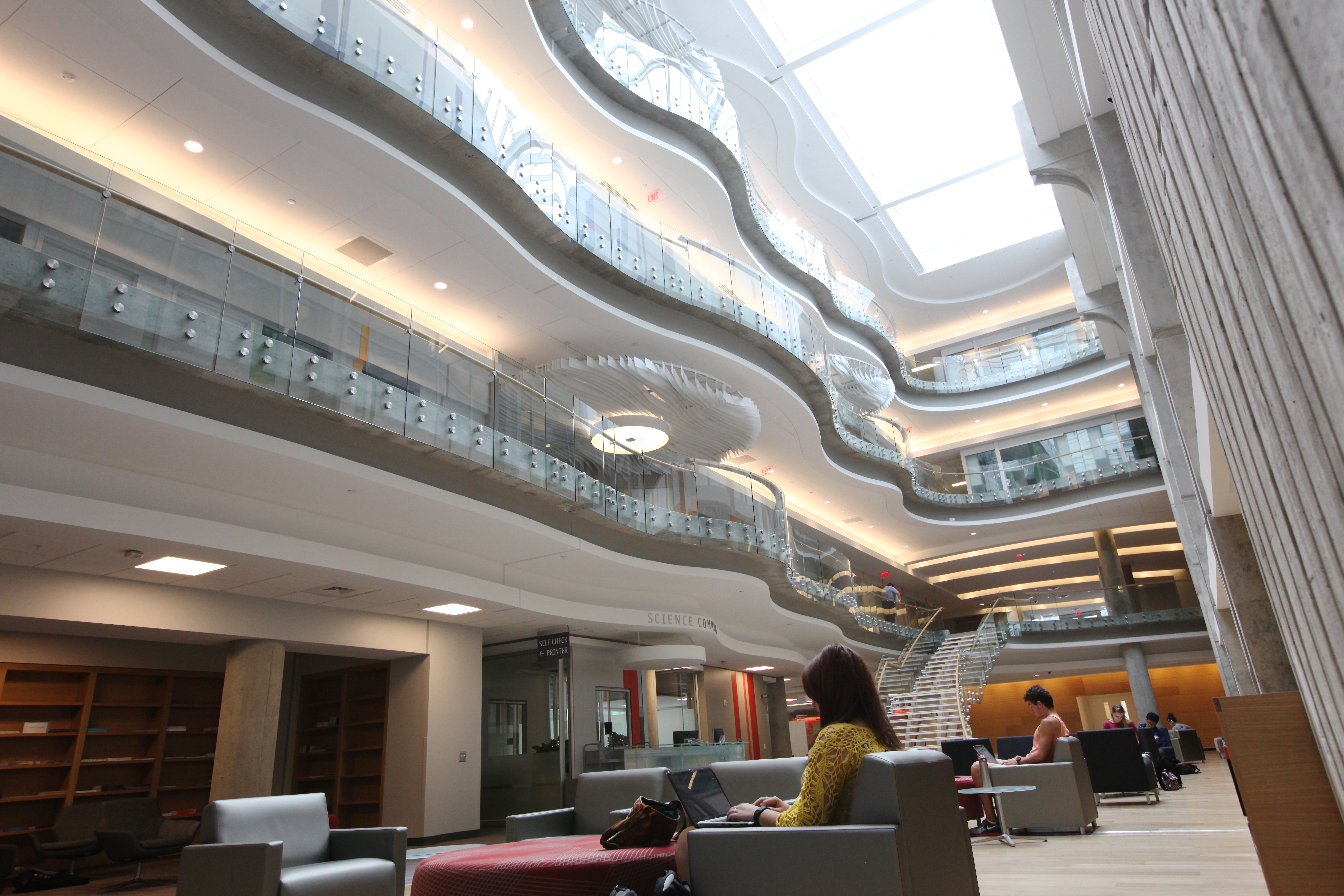 After nearly two years of construction, the newly renovated and expanded Atwood Chemistry Center building will officially open at the end of this month. However,  it’s already being used for class, according to Asa Griggs Candler Professor of Chemistry and Biology David Lynn.

The new building is filled with technology-equipped classrooms and learning spaces as well as a new campus Highland Bakery coffee location.

The renovation reflects changes in learning, particularly in the sciences, shifting from lecture-style classes to classroom instruction that is more focused on collaboration and creative problem solving and that seeks engagement from a variety of learners, according to Lynn.

Renovations to the building were largely made possible through funding from the discovery of Emtriva, an anti-HIV drug developed at Emory. On the other hand, the reforms to the educational curriculum were largely funded by a 1.2 million grant from the Howard Hughes Medical Institute.

In total, more than 52 million in funds was spent during the entire project, according to Lynn.

Though the construction is recent, discussion about renovations emerged since 2006, inspired by the idea that traditional lecture-style teaching might be somewhat outdated, Lynn said.

Upon entering the new building, there is an immediate array of movable tables, whiteboards and wheeled chairs that allow students to not only work independently, but also collaborate with other students.

This means “ideas can be transported from table to table,” Lynn said.

“It’s meant to be not just a place to store books, but really a place to meet,” Lynn said of the building, especially of the main area, which contains large tables for students to study with each other.

Lynn also highlighted the addition of the “Coffee Lab,” a spinoff of Highland Bakery, which is located on the first floor of the building and provides another source of caffeine and pastries for students and professors.

This new location combines a chemistry theme with a modern vibe, reflected through its name and the images of cartoonish beakers and flasks decorating its walls.

Moving past the main area, the classrooms are not designed in the form of the traditional lecture halls with a white board at the front of the room and stadium style seating.

Rather, they are filled with round tables dispersed throughout the room. These new classrooms, while accommodating fewer students, allow for more discussion amongst the class.

“Rather than having lecture halls, we have table seating that gives the opportunity not only to be organized as a whole class but for students to share ideas and learn from each other,” Lynn explained. “It’s much like what happens in a research lab.”

In the past, Lynn said, learning at Emory revolved around the absorption of information through lecture-style dissemination.

However, since information is largely available through Internet access — made possible by using an iPhone or laptop — the educational experience can shift focus to learning how to creatively and actively use the information available, according to Lynn.

“Our education, internationally, is moving toward that because the opportunities [now] are different [from those in the past], so absolutely I think Emory is leading the way,” Lynn said.

Tracy McGill, senior lecturer in the chemistry department, is one of the professors taking advantage of the new classroom layout.  McGillwrote in an email to the Wheel that when students are no longer seated in one direction, at a single desk and towards a single instructor, “there is an educationalopportunity that is truly explosive.”

“It is no longer about a single professor supposedly “imparting knowledge” to students who know nothing,” she said. “Every student comes to the classroom with the ability to contribute something valuable — the layout of the room facilitates the contribution that a student can make to the educational process.   Every student becomes accountable for the education of the entire community of learners in the room.”

McGill elaborated that some of the activities that the room facilitates include online simulations about isotopes and photoelectric effect, and activities that ask students to determine the mass of a substance inside a box of unknown volume.

She also added that, “in the atomic room [the new chemistry room] we do not define what an isotope is. Google or the textbook can do that for you – you do not need a faculty member for that. Instead, we apply the knowledge of isotopes to the interpretation of a mass spectrum, which is more challenging.”

Doug Mulford, senior lecturer and director of undergraduate studies in the chemistry department, also wrote to the Wheel sharing a recent experience he had with his class:

“In class last week my students used pennies for models for electrons to investigate how [Robert A.] Millikan determined the charge of an electron over 100 years ago. The logic that Millikan used has always been very difficult for students to understand but they seemed to do much better with the hands-on activity.”

It’s not only the students who will journey in this move toward a more interactive education, but also professors.

“I’m both excited and terrified this semester,” Mulford “I’m having to re-learn how to teach, but I would say already … the level of engagement amongst the broader audience is better.”

The expansion and renovation of the building, however, did not just focus on changes to the inside. The outside quad, in between the old part of the building and the new part, is a bright green area surrounded along the perimeter by chairs and tables to allow students to study or talk with one another.

The quad was built in such a way to invite students of diverse interests to study, talk and engage in the community of scholarship, according to Lynn.

He also added that the small stage toward the middle of the quad is meant to allow organizations or students involved in theater and other arts to perform and use the space to exercise their talents and creativity.

Possible events to take place on the quad include everything from science class poster displays, the Atlanta Science Festival theater venues, dance classes and talks on World AIDS Day.

Lynn emphasized that the area strives to honor the arts and sciences at the root of the college experience.

College senior Ben Burton, who had his first class this past week, believes that the changes in the building will increase “the likelihood that people will want to learn more and go out and meet people.”

“I feel like it will bring people closer together,” he said.

For McGill, the change, with all its effort and experimentation, is promisingly rewarding. She said that being involved in this changing approach to learning is pushing her to think in different ways about how she will teach.

“It’s really very humbling for the faculty member,” she said. “You kind of have to teach from the perspective of: What is the learning goal for the student and how can you help them achieve that goal themselves?”