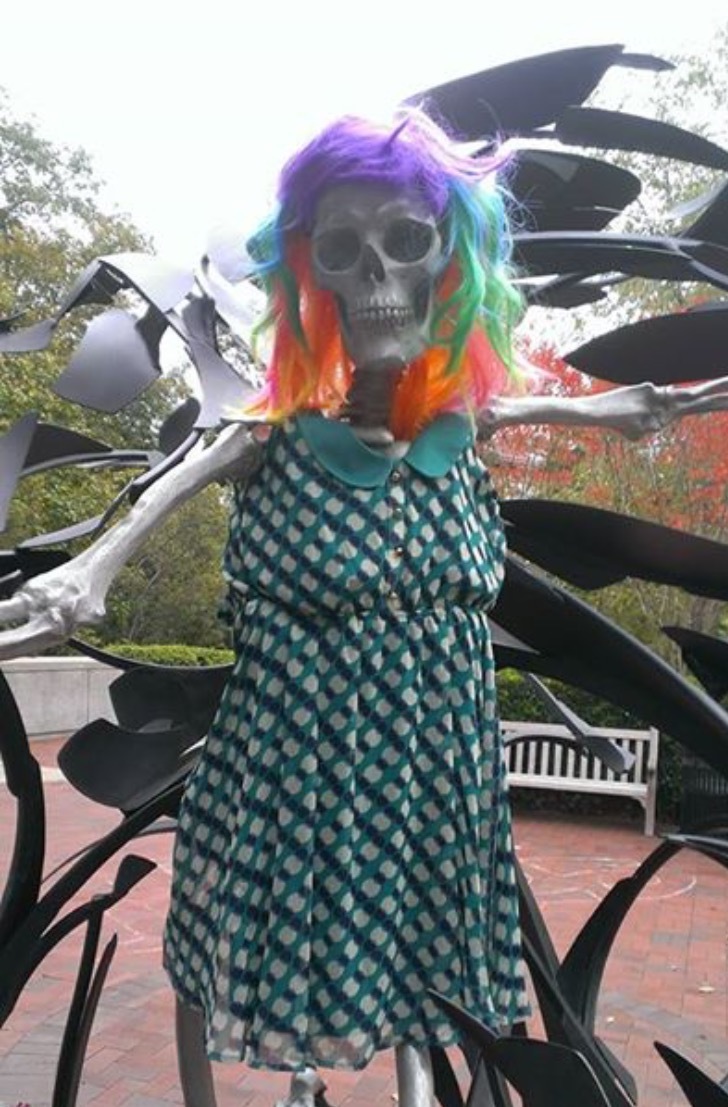 After renovations were completed this fall, the grand opening of the Sanford S. Atwood Chemistry Center took place on Saturday, Sept. 26 during Homecoming weekend. The event featured a dedication with remarks from University President James W. Wagner and Emory College Dean Robin Forman as well as a ribbon “explosion.”

Around a hundred alumni, benefactors and contributors came together to celebrate the completion of a long awaited project. Following remarks from key contributors to the Atwood renovations, guests enjoyed the ribbon explosion, refreshments and tours of the Center. With children dancing to the melodies of No Strings Attached, Emory’s all-male a cappella group and parents observing the science demonstrations, the event had a joyous atmosphere. The building was blessed by Rev. Bridgette Young Ross, dean of the Chapel and Spiritual Life.

In true Emory style, the ribbon cutting was filled with excitement and delight from the crowd and was followed by a cloud of smoke. The ribbon was “cut” by Doug Mulford, senior lecturer in the Chemistry Department, who burned magnesium to create a bright array of sparks. He simultaneously performed an experiment using liquid nitrogen, which created the white cloud.

Renovations to the former Chemistry building included new classrooms and learning spaces. Instead of the traditional lecture-style classroom, the Atwood Center now features round tables and projectors on every wall. Spaces are meant to induce collaboration, with whiteboards and seating meant to increase student discussions. The new center also includes a small outdoor stage as well as The Coffee Lab, which is a spinoff from Highland Bakery.

Wagner attended the event and spoke on the great amount of change that Emory has gone through, including the change from a good regional institution to a world-class research university.

“What is most constant here are values, the values that we see reflected in this space that we are dedicating today, a space of graceful beauty,” Wagner declared.

Praising the new building, Wagner noted the engineering finesse and modern Emory aesthetic that was incorporated into the design.

Wagner closed by urging the audience to “rededicate ourselves to strengthening communities, learning in new and imaginative ways, [conducting] transformative research, and helping all students but especially those whose intellectual curiosity we can ignite into a passion for learning.”

Forman also attended the event and introduced Asa Griggs Candler Professor of Chemistry and Biology and Research Chair for the Chemistry Department, David Lynn. Lynn played a large role in the vision and leadership of the project, according to Forman.

Lynn touched on the history of the building, noting that the Sanford S. Atwood Center was built when Emory moved from Oxford to Atlanta and at that time “catalyzed the growth of research and development … the discoveries made during that time period were really quite remarkable.”

Chemistry Department Chair Stefan Lutz said that this is “an exciting time” for the department.

Lutz praised the building’s ability to foster discoveries while being a “communal space for students, staff, and faculty to meet with colleagues, study and discuss homework, or simply to enjoy great company while sipping on a cup of coffee.”

Todd Polley, director of the Chemistry department, also validated the benefits the new addition will bring.

“Since the addition’s opening, I have enjoyed watching people experience the new space,” Polley said. “The inauguration is another opportunity to share this wonderful space and celebrate the community of scholars that will do great things within the space for many years to come.”

In his introduction of the Center, Lynn references the artwork that dons the building. This artwork was created by Brendan O’Connell, an artist and alumna of Emory University.

O’Connell, who founded Everyartist, a nonprofit designed to “spark creativity” by promoting children’s artmaking, has been featured in The New Yorker, Time, The Boston Globe and reviewed in Art in America. Inspired by American artists, O’Connell has been painting a collection about Walmart, “the quintessential contemporary shopping experience.”

According to O’Connell, the new space is intended to be collaborative and interactive.

“Good design makes us feel better, think better, and live better,” said O’Connell. “I wanted to do something that was organic and process-driven.” He created his artwork in quadrants so that it can be seen by both levels of the atrium.

The Atwood Center strives to be a “marketplace for sharing ideas,” an example of this being the Atlanta Science Festival, according to Lynn.

Lynn invited guests to “absorb the energy and share thoughts and ideas” on the beginning of a “new evolutionary journey for the next 100 years.”

The successful opening attracted many who had invested in the building.

“I think it’s wonderful,” Tanya Thomas, who is part of the College Development Office which planned the event said. “There are a lot of people here, as this is the same week as not only Homecoming but also the Board Meeting, so there are lots of donors and alumni here. This was the perfect time for the opening.”

Heidi Litner (98’C) commented that she “really enjoyed” the ribbon explosion as well as the a cappella group and the food.

As Emory ends its first century in Atlanta, it’s natural to think about what comes next, according to Forman.

“It is especially true at a moment like this [to think about what comes next] because investing in a facility like this is not about the next year or the next decade,” Forman said. “It is about imagining the campus a hundred years from now … So it is in buildings like the Sanford S. Atwood Chemistry Center that the story of Emory’s next 100 years will be told.”