While the arts can at times seem neglected at Emory, its presence on campus persists. Students gathered at the Alpha Tau Omega (ATO) fraternity house to watch their peers perform and showcase their art Nov. 3, at Symposium VII hosted by The Pulse and ATO.

Although the layout of the venue resembled an art museum, the ambiance differed greatly from the quiet and strict environment often associated with galleries. Lilting, slow music filled the air and intermingled with the jovial hubbub of artists and friends celebrating talent and creativity. Fairy lights strung across the open roof provided the sole source of light other than the moon shining past the clouds. The throng of about 100 people packed into the patio space meandered around, perusing the wares of various vendors.

Some of the art pieces invited bystanders to inject themselves and their own interpretations into the art. Abstraction tinged some pieces, with realistic sections serving not as subjects but merely as details to orient the viewer’s perspective. Notably, one collage combined everyday objects, such as the ubiquitous Waffle House logo, with more religious tinged motifs of Jesus and Satan. People speculated with friends and strangers alike about the potential meanings of certain meshes of colors on a canvas.

Outdare, one of the clothing shops stationed at a booth, was manned by an obviously passionate Cory Clarke. Clarke explained the brand’s message was to be unafraid and live life to the fullest. In spite of owning the business for five years already, he clearly exhibited his belief in and passion for his company when he spoke about to students about it.

As the performances began, the crowd slowly trickled out of the displayed art area toward a small stage perched on the driveway. Some students opted to stand around the edge of the stage while others sat directly on the gravel. When the volume of the first performing duo Samuel Zinga (19C) and Kathy Li (19C) crescendoed, a hush fell over the previously restless crowd as Zinga strummed the song’s first chords on his guitar and harmonized with Li’s gentle voice, transfixing members of the crowd.

Despite short breaks between performances to adjust seating for the next artists, the audience remained attentive throughout the night. Certain performers, like Nick Furci (20C) touched on serious national topics, including police brutality, racial inequality and Deferred Action for Childhood Arrivals (DACA) program through spoken word. Those more serious performances transitioned into much lighter raps in which the performers encouraged the listeners to stand up to fully enjoy. Some other acts freestyled: Jonathan Braude (18B) and Shea Fallick (18C) incorporated an audience suggestion of Maggie’s Neighborhood Bar and Grill as the topic of their song.

Visual aspects also accompanied some of the live soundtrack of the night; Julien Chaix (18C), Tom Hunter (18C) and Andrew Felix (16Ox, 18C) had a projector displaying colored amorphous shapes undulating and drifting onto a white backboard. Unintentionally, some of this projected background slipped past the backboard set up and shined onto the stoic walls of the Media, Literature and Arts Outreach (MLAO) house next door, making the aura of the music feel as though it was physically expanding past us.

Small technical issues accompanied the performances, including the malfunctioning of a mic in the middle of a duet. However, the singer, Sara Frank (18C), backed by Aidan Williams (18C) on guitar, took the opportunity to make a comedic reference to the lyrics of “The Night We Met” by Lord Huron that she was previously crooning. Leaning into the working mic next to her, she repeated, “What the hell are we supposed to do?” while humorously gesturing at her failed mic. The issue was never entirely fixed, but the gentle crackle of the microphone quietly protesting throughout the rest of the performances supplied an odd sense of nostalgia due to its resemblance to the quiet scratch of record players.

Various sizes, mediums and styles of artwork were collected in one area with no particular  order to their display, but they still worked well together aesthetically. Their unintentional juxtaposition created an interesting dynamic, reflecting the different visions and motivations that the artists have for their artwork. Symposium represents a microcosm of Emory as a whole, with its blend of contrasting backgrounds that all work together to create a fluid but cohesive student body.

Discovering Atlanta Arts, an Insight into the Stars 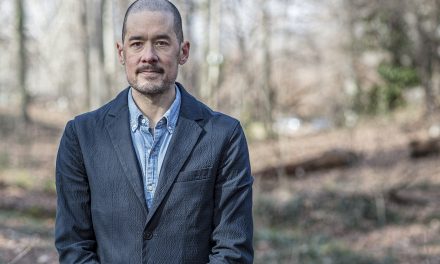 Nathan Lee on Critique, Teaching and the Future of Theory

Concert Strikes A Capella Gold Mine