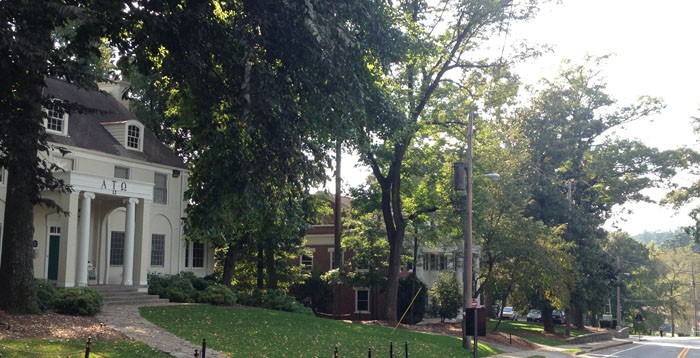 TEDx Emory and Alpha Tau Omega (ATO) fraternity collaborated to host Salon, in which the ATO brothers welcomed students into their house on Eagle Row to listen to student speakers address an array of topics ranging from the social construction of disability to the prevalence of domestic minor sex trafficking in Atlanta.

Deviating from the standard TEDx talks, in which the speakers stand on a stage and occasionally take questions from the audience, Salon took the form of a French-style salon – the hub of intellectual thought from the 17th to 19th centuries in France – allowing for a more casual dialogue to take place.

Well versed in their individual topics, these student speakers each articulated complex social issues that often go unrecognized. They shared their own experiences coming face-to-face with these issues.

Moved by his talk, the audience waited until he finished before asking what the Emory University community could do to help.

Vanka revealed startling statistics about domestic minor sex trafficking and personal accounts from her experience working at Wellspring Living, a rehabilitation center for victims of sex trafficking. To this and the other talks of the night, students in the audience responded with curiosity and compassion and looked for ways in which they could help make a positive difference.

Ravi and Ortiz, Co-Presidents of Feminists in Action addressed an antifeminist tweet, which read, “I’m here to make you uncomfortable because your comfort is dependent on me being subhuman.” In responding to the tweet, they explained the male role in the feminist movement. According to their talk, empowering women is a crucial component of dismantling the patriarchy. The discomfort of the group that holds the most power is a necessary effect of change, which means that feminism should not be redefined solely for the purpose of lending men a greater sense of comfort.

Klarman spoke against doctor-assisted suicide for those wishing to escape a life of physical disability, which he redefines as a change in lifestyle as opposed to something that is inherently crippling. He highlighted the fact that an able-bodied individual would be considered mentally unwell if he or she wished to commit suicide, but someone of who sustained trauma and became physically disabled as a result would be almost expected to consider suicide at some point. Despite the possibility of a negative change in lifestyle, doctors should not be able to offer assisted suicide as this may prompt doctors to suggest suicide rather than working to improve the patient’s quality of life.

Hoq recounted his hands-on experience protesting Ferguson and coming face-to-face with injustice. More than anything else, he learned the power of physically getting involved in activism as opposed to partaking in passive activism such as liking a post on Facebook, which has become an all too common form of protest in our generation.

O’Grady, separated from the talks of activism of the night, spoke of the power of preventative health. Individuals go about their lives distracted by daily events, so, of course it is no wonder that there exists a disconnect between the self and the body. She explained that individuals could practice preventative health and drastically improve their well-being simply by developing a great sense of self-awareness.

College senior and TEDx Emory Co-President Jane Singer explained that the idea behind Salon was born out of the inspiration that she got from ATO’s Symposium event held in collaboration with The Pulse in October. Symposium brought student artists throughout the Emory community together to highlight the performing arts programs here on campus.

“[Symposium] had that same idea of repurposing the fraternity house into a different, more inclusive space. After that event, I reached out to [College junior and Vice President of ATO Oliver Paprin] and asked if we could do some sort of collaboration,” Singer said.

In response to Singer’s proposal, Paprin enthusiastically agreed to help make the event happen. He said that the event fit with ATO’s efforts to redefine student perceptions of fraternity life.

“We’ve been working day-in and day-out to try to get the best speakers on campus to help create this experience that’s kind of something different,” he said.

Singer says she anticipates more events like this coming to Eagle Row in the future.

“I don’t know that we would want to do the exact same thing annually, but rather put on other events with the same goals of bringing new ideas to campus and to Fraternity Row,” Singer said.