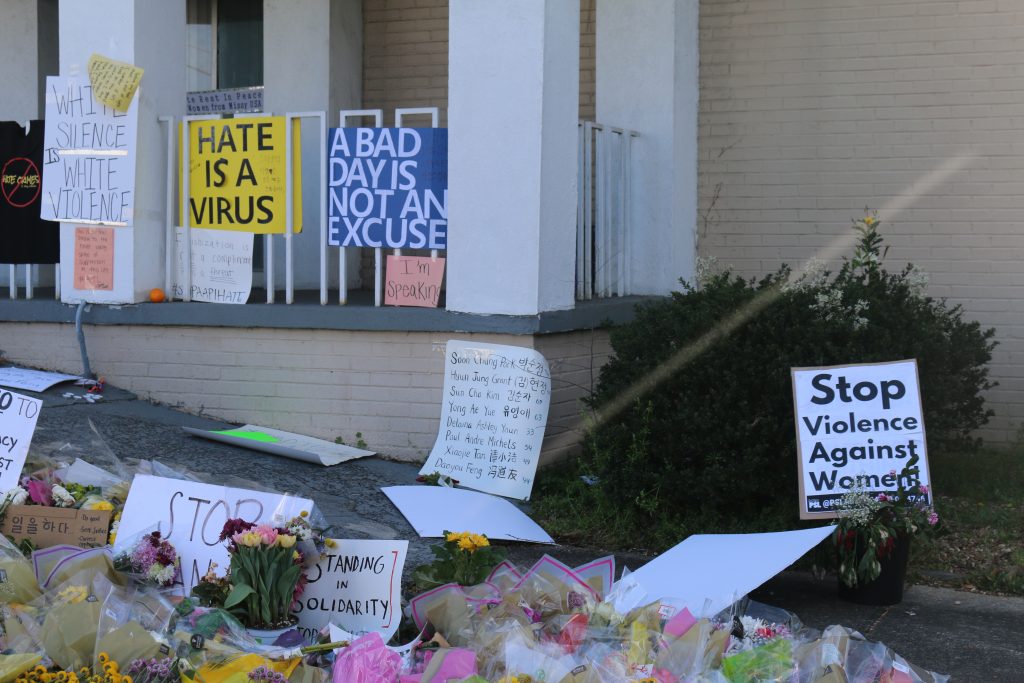 On March 16, 21-year-old Robert Aaron Long, who is white, killed eight people in three different Atlanta-area spas. Prosecutors charged Long with eight counts of murder and one count of aggravated assault. Six of his victims were Asian and seven were women. This act of violence is just another example of white supremacist radicalization. It has led to bloodshed and anti-Asian hate crimes that American society has overlooked for centuries.

The first shooting took place at Young’s Asian Massage in Acworth, Ga., where Long killed four people before driving nearly 30 miles into the city of Atlanta to Gold Spa and Aromatherapy Spa, only minutes from Emory’s campus, where he killed four and injured one more. Long was arrested 150 miles south of Atlanta on his way to Florida, where authorities believe he intended to target more spas.

Long has said that his actions were not racially motivated. Instead, he claims he suffers from a sex addiction and murdered his victims solely to rid himself of temptation. While they have condemned anti-Asian and anti-Asian American violence, President Joe Biden, Vice President Kamala Harris and the Federal Bureau of Investigation (FBI) have not explicitly stated whether they consider Long’s shootings a hate crime. Instead of following the government’s stance of neutrality, we need to take a more unequivocal stance against anti-Asian violence and condemn it as the hate crime it is.

Given recent surges in anti-Asian violence, standing against it now is especially urgent. Since COVID-19 struck last year, a watchdog group Stop AAPI Hate reported nearly 3,800 incidents of anti-Asian hate, 68% of which targeted women. Last week’s shootings are not isolated events. Long and other white supremacist perpetrators who thrive off of the victimization and fear of minorities must be held accountable.

Six out of the eight shooting victims were Asian women. Long attributed his homicide to his attraction to the victims, but we cannot ignore the intersections of race and gender that led to the shooting. Asian women have been sexualized throughout American history; separating sex and race when determining criminal motive negates Asian women’s experiences and the ways in which the intersections of their identities impacts them. Nancy Wang Yuen, a scholar of race and ethnicity in film, television and new media at Biola University (Calif.), recently noted in an interview with NPR “that removing racism from the conversation ignores the history of hypersexualization and fetishization of Asian women in the U.S.”  If not for the confluence of their race and gender identity, the violence perpetrated against these Asian women would not have happened. Race and gender are impossible to separate, as making that distinction unfairly reduces the onus on Americans to contend with vicious, deadly prejudice.

The ties between race and gender necessitate a broader conversation about the historical relationship between the Asian community and the U.S. We cannot discuss anti-Asian hatred without acknowledging state-sanctioned violence against Asians. The U.S. government initiated numerous wars in Asia during the twentieth century, rooted in the notion that Asia was a place for the U.S. to dominate. While overseas, American troops also began to associate Asian women with sex work, ingraining the belief that Asian women are sexual objects. As such, Long’s shooting is not an un-American violence, but instead the latest example of one that the U.S. has perpetrated over and over for centuries. We must understand, address and rectify this reality as we move forward with the Asian community and help them heal and recover from this horrific violence.

We must take steps to promote awareness of the issues faced by the Asian community on social media and in civil discourse, as well as educating ourselves on improving our allyship with Asian Americans. We need to actively combat the harmful stereotypes involved by speaking out and condemning racist ideology pertaining to Asian Americans.

We stand in solidarity with Emory’s Asian community. There is nothing we can say or do to undo the violence or heal the wounds, but we can offer our hearts as we listen to the testimonies of Asian students, faculty and staff. Now, more than ever, we must come together with empathy and understanding in a society divided by hatred and violence.