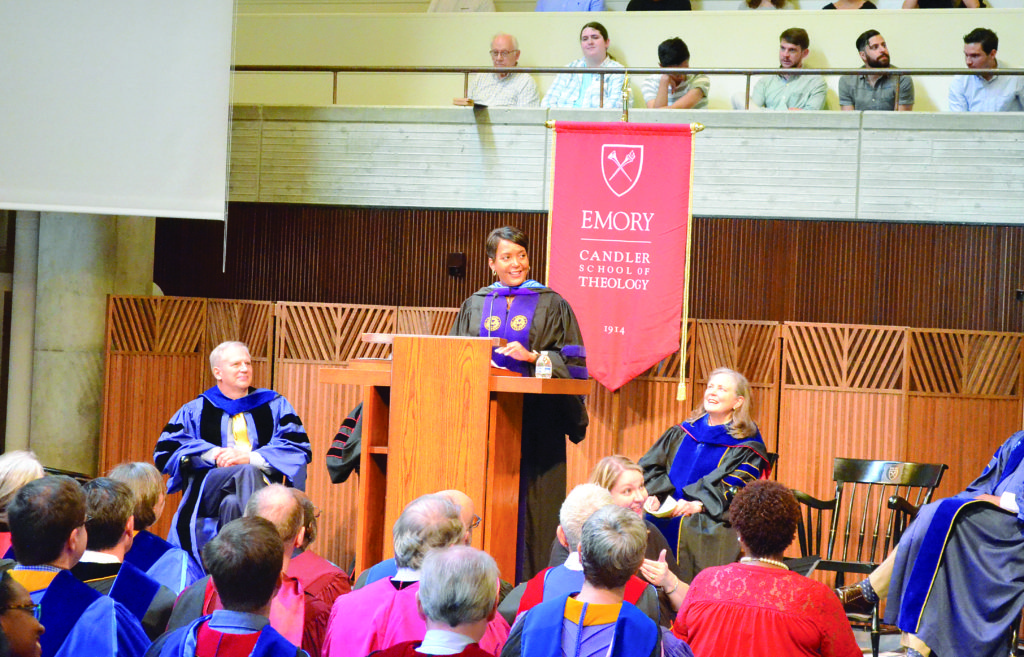 Atlanta Mayor Keisha Lance Bottoms discussed her religious experiences in connection with her political career at an Aug. 30 convocation address to the Candler School of Theology in Cannon Chapel.

Bottoms told about 400 audience members that she began to trust in her faith as a child after she realized good people can make bad decisions.

“I came home from school one day, third grade, and I literally saw my father being led out of our apartment in handcuffs,” Bottoms said. “It was a drug raid … and I learned at the age of eight that sometimes good people can make bad decisions.”

Bottoms said seeing her father arrested impacted her childhood. She spent her weekends visiting him in prison.

Bottoms’ mother, who previously stayed at home, supported the family when Bottoms’ father was imprisoned. The mayor said the hardship her family endured was a sign from God.

“What I know now is it was God’s way of making me not complacent with success of my parents or the things that they had provided for me,” Bottoms said. “It really is determination that I never wanted that to be my life. I didn’t want to struggle like I watched my mother struggle.”

Bottoms later obtained her law degree from Georgia State University but said she felt unsatisfied with her legal career. She became a magistrate judge for six and a half years before she decided to run for a seat on the Superior Court of Fulton County in 2008. Although Bottoms lost the election to the incumbent, she continued working toward a career in politics and said that the experience pushed her out of her “comfort zone.”

“God told me there would be something bigger and better in store,” Bottoms said. “I remember sitting on my floor one day, cross-legged, and I had bills all around me. We had charged up the whole election … and I thought, ‘God you told me to do this, now what?’”

The next year, a city councilmember retired, providing Bottoms with an opportunity to enter politics.

“I had a ‘What would you do if you were not afraid to fail?’ moment,” Bottoms said. “I did what I wanted for my community … I signed up to run for city council.”

The decision to run for mayor, however, was more difficult for Bottoms. She said she received support from friends and family, but she wanted affirmation from God.

“I was sitting in Impact Church that day and received from God the confirmation I needed to run for mayor of Atlanta,” Bottoms said. “And what I can say to you is that if I had not waited for that confirmation, I could not have withstood the campaign we endured for more than a year.”

The mayor ended her speech by encouraging audience members to pray for the city of Atlanta and its leaders.

Carmen Reid (21T), who attended the convocation, said Bottoms’ speech reaffirmed her confidence in attending the Candler School of Theology.

“A lot of her words really touched me,” Reid said. “I feel that I am called to be at Candler so hearing her reaffirm that with me was just great.”

Sekou Laidlow (21T), another attendee, said she was similarly inspired by Bottoms’ speech.

“I thought she was inspiring,” Laidlow said. “It’s the perfect way to start off the year — just in terms of giving us perspective about calling and a reason for being where we are at this time.”