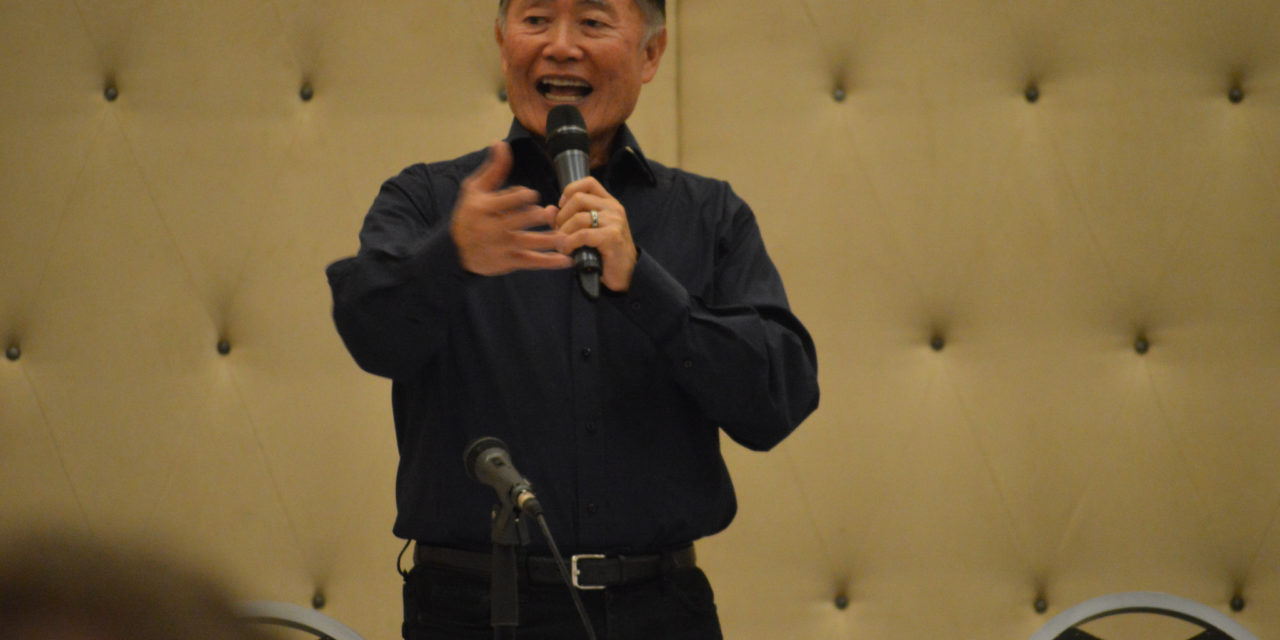 Perhaps one day, Hollywood will catch up to the 1920s. Back then, Japanese-American actor Sessue Hayakawa (who would later win an Academy Award) took the burgeoning film industry by storm with his charming looks, melodramatic style and memorable performances. Although his name has faded into obscurity, Hayakawa was as famous as Charlie Chaplin during the peak of his popularity. He owned his own production company, wrote his own films, drove a gold-plated car and became the then new Hollywood’s first sex symbol.

His movies, along with the films starring Chinese-American actress Anna May Wong, encompassed some of the most important films produced during the silent era. Even with his incredible success, widespread anti-Japanese sentiment after World War II severely limited his success, boxing in his roles as an “honorable” villain at best.

The media landscape for Asian-American actors and actresses has changed significantly since Hayakawa’s time, and not always for the better. Hayakawa experienced negative typecasting as a result of his race in the post-World War II America.

Very few of his contemporaries would ever enjoy the same success that he achieved in the early 1920s. His success generated profit for Hollywood production companies. Today, broken English and “perpetual-foreigner” comedic sketches generate profit. If Hollywood is to become more inclusive and portray Asian characters in a more positive (and normal) light, then consumers must be the one to force its hand by carefully choosing what to watch.

In 1959, Japanese-American actor James Shigeta exploded to the scene as one of the principal leads of “The Crimson Kimono,” where he played a Korean War veteran, police detective, and successful love interest. Shigeta, who perfected the deep and commanding masculine voice and exuded confidence in his performances, was probably the last Asian-American actor to have experienced consistent and mainstream success playing non-stereotypical Asian characters. During his career, he played roles in historical dramas, action films, westerns and romantic comedies, portraying characters across a diverse set of genres that would never be matched again. His 1961 “Flower Drum Song” is one of few Asian-American musicals ever made, even to this day.

That same year, however, came the release of “Breakfast at Tiffany’s” and its infamous Mr. Yunioshi, who was played by a white male wearing “yellow” makeup that exaggerated the smallness of his eyes. “Yellowface,” the term used to describe this phenomenon, has and remains a common technique to exclude Asian actors from representing themselves.

Even so, several famous Asian-American actors rose to fame in the years following the release of “Breakfast at Tiffany’s.” Many of them are still well known today, such as Academy Award-winners Pat Morita (“The Karate Kid”) and Mako Iwamatsu (“The Sand Pebbles,” “Avatar: The Last Airbender”), and “Star Trek” star George Takei. Bruce Lee’s famous martial arts flicks also became a prominent example of America’s perceptions of the Asian-American male.

It would be wrong, however, to call this time a “golden age” for Asian-American representation (Mr. Yunioshi comes to mind). As Shigeta’s career came to an end, a strange duality appeared in Hollywood’s depiction of Asian characters.

They were either evil and diabolical (“Fu Manchu”) or effeminate and wise. Morita’s famous Miyagi (“Karate Kid”) and Takei’s Hikari Sulu (“Star Trek”) were both examples of the latter. As Bruce Lee’s martial arts roles became increasingly well-known, however, that trope faded out in favor of the quiet fighter.

Then “Sixteen Candles'” Long Duk Dong came along, and Asian-Americans weren’t even allowed to be strong and kick-ass anymore. Dong was infamously controversial as a foreign exchange student whose role in the show was to provide comic relief in the most ridiculous fashions. He not only spoke in nearly unintelligible pidgin, but he was also the epitome of “foreignness” in his perpetual inability to understand American social customs.

For example, he uses two forks to mimic chopsticks, and wears his hair as a bowl-cut. But during that time, Dong was one of the only representatives of Asian-Americans on television. So for an entire generation of Asian-Americans, going to high school was to be compared to Dong, who was every bad stereotype rolled into one character.

Long Duk Dong and Mr. Yunioshi have cast a long shadow over Hollywood, influencing casting and writing decisions even today. “The Last Airbender” is a particularly egregious example. Based on a popular television cartoon featuring diverse characters in an Asian-influenced universe, the film adaptation featured an all-white protagonist cast and an all-Indian villain ensemble.

“2 Broke Girls,” one of television’s most popular sitcoms, features Dong Jr. in the form of the bafflingly stereotypical Han Lee, the short, accented, work-obsessed owner of the restaurant where the titular characters work at.  He is the epitome of the “perpetual foreigner” trope that many Asian-American actors cannot escape from.

Even “Cloud Atlas,” whose unique story did provide legitimate reasons to cast Jim Sturgess as a future Korean rebel, could have made more of an effort than to give him a messy bowl-cut and prosthetic squinty eyes. Even though Hayakawa had to face his share of racism in his time, I’m pretty sure he would not be proud of this legacy one century later.

Any attempt at producing a television show or film that features a non-caricatured Asian character has to push up against this imposing wall. At Culture Shock this year, keynote speaker Eddie Huang spoke out about some of the difficulties he faced when he tried to convince the writers of a new sitcom based on his memoir that certain jokes really weren’t funny.

Huang said that racial jokes are only appropriate when the group being made fun of can enjoy and laugh along with everyone else. I agree. But Hollywood doesn’t, yet.

If there is one thing that Hollywood isn’t immune to, it’s money. If a succession of film or television shows with a popular and attractive Asian lead becomes popular and generates profits, then I bet that Hollywood will reverse its production of caricatured Asian characters.

I believe that the media environment has been changing. “The Walking Dead” features actor Steven Yeun as Glenn, a dependable and trustworthy leader and survivor in a post-apocalyptic world. Glenn’s interracial relationship with Maggie is portrayed as any normal relationship in a zombie apocalypse can be.

Actress Mindy Kaling’s popular romantic comedy, “The Mindy Project,” likewise features a strong and dependable woman living in New York City. Like Glenn, Mindy’s interracial relationships are not trumpeted as as a forbidden fruit to entice audiences (as Hayakawa’s sometimes were), but are treated as normal television trysts, as they should be.

I think Hollywood is currently on the fence over how it should depict Asian characters in the future. For every Glenn and Mindy, there are characters like Han Lee and The Big Bang Theory’s Raj Koothrappali, whose most defining characteristic over five seasons was as a university researcher incapable of even speaking with women unless he’s intoxicated (this has thankfully changed). Hollywood is experimenting over what makes more money. That makes this year’s freshman sitcoms Selfie and Huang’s Fresh of the Boat all the more important.

Selfie is a modern retelling of “My Fair Lady.” In a rare occurrence, the romantic comedy features Korean-American actor John Cho as the male lead (Henry Higgins), opposite Karen Gillam’s Eliza Dooley. The show got off on a rocky start, but the sizzling chemistry between the two leads prove that Asian-American actors have the chops to play romantic men. When Henry dedicated his office’s trash can to Eliza because she eats her meals exclusively over trash cans (an excuse because she never had friends when she was younger), Selfie transcended its unpleasant title and revealed itself as a truly smart show, capable of delivering both comedy and eliciting powerful emotional reactions from audiences. That is why it is a huge shame that ABC cancelled Selfie this past week.

Fresh off the Boat premiers in January, promising to be a smart Asian-American driven family sitcom. Despite Huang’s misgivings about some of the show’s jokes, he still encourages everyone to tune in. If Hollywood sees that its normal and positive portrayals of Asian characters are popular and generate profit, then they will change. As the first Asian-American family sitcom in over two decades, “Fresh off the Boat” has the potential to completely change Hollywood’s perceptions of how to treat Asian characters and Asian-American actors. It is my hope that the show is successful both in popularity, but in depicting Huang’s family in the same sarcastic but loving way that it was originally written as.

Hopefully very soon, we will return to a time when it wasn’t strange to see an Asian-American actor leading an action flick or a rom-com, and the young Asian-American child sitting in front of the television won’t have to squint to catch a glimpse of the token positive representative of her race anymore.

Edmund Xu is a College senior from Los Altos, California.