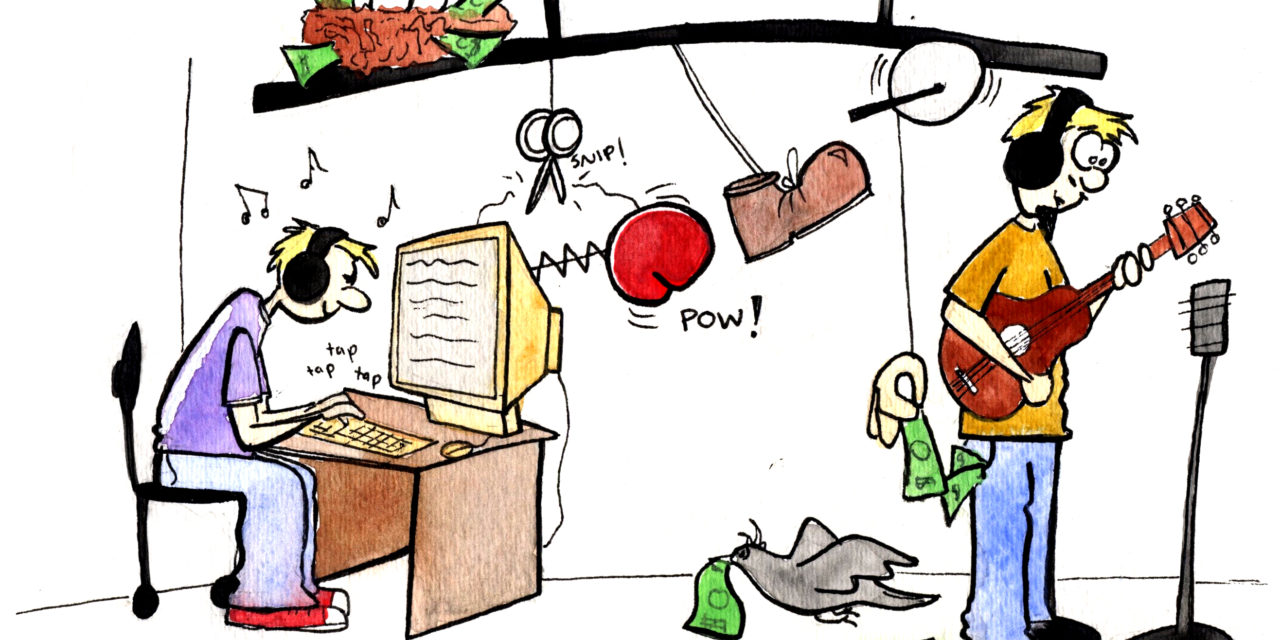 If you love music, chances are that you are a criminal.

No, you have probably not broken into a friend’s home to steal his album or rip audio off of the Internet to distribute to hundreds of people for profit. But download an album from a free file-sharing network? Copy an album from iTunes onto a blank disk as a birthday present for your mother? You have broken the law.

As the school year begins, frugal college students will be searching for various ways to save money. Illegally downloading music online has become a widespread solution for budget-conscious youth.

In this electronic age, the Internet allows for instant information with the click of a button. Students have grown up with this technological advantage in their daily lives. Illegal music-streaming websites are a major source for students’ tunes. Their wallets are thin, and in this era of instant gratification, driving to a record store may take too much effort. Free online music becomes that much more appealing.

However, this convenient fix for your Bieber Fever is not appreciated by all.

Although millions of people illegally download and share free tunes, the American government and the Recording Industry Association of America (RIAA) are vehemently fighting against unauthorized copying of music. File-sharing networks such as Napster have been shut down, and lawsuits can result in high fines and even jail sentences. Boston University student Joel Tenenbaum was fined $675,000 for only 30 illegally downloaded songs. Other cases of students facing charges for such behavior have also been reported.

On a smaller scale, Emory University is also fighting piracy. Students who acquire their music illegally are at risk for suspension of online network access and further disciplinary action. Emory does not protect students from the courts for crimes as simple as giving a friend a copied CD of copyrighted songs.

Other schools are cracking down as well. Florida Gulf Coast University has implemented Red Lambda, software that searches the school’s network for illegal files and identifies the user. Hundreds of students have had their Internet suspended.

Though such crimes may seem minor, music piracy takes a financial toll on both musicians and the music industry. According to the RIAA, nearly $13 billion, 70,000 jobs and $2 billion in wages are lost each year due to music theft. Between 1999 and 2009, an increase in the rate of illegal music purchases was correlated with a decrease in the employment of musicians.

Many students are willing to speak openly about their illegal downloading practices, demonstrating just how petty a crime music piracy is viewed as by college youth.

College senior Ramya Anantharaman admits to pirating music and recognizes the effect of the growing importance of bills over thrills.

“Music is far too commercialized,” she said, “It’s no longer an experience. It loses its artistic value.”

But should music be so commercial? Is the main purpose of a melody to milk each note for every dollar it’s worth?

Within America’s consumer culture, has the true essence of music been lost? Music stems from an artist’s imagination, creativity and soul. Some say it is a medium through which a musician’s feelings can connect to the listener on a personal level. Fans sing loudly off key, dance clumsily until they collapse and, sometimes, even shed tears. Is such genuine enjoyment meant to be experienced with strict monetary limitations?

Piracy’s larger economic implications might not be a primary concern among many college students, who view attempts at limiting their music availability as stringent and overbearing.

“There is something more commercialized with a consumerist mindset that comes with forcefully setting a price to [music]. … Instead of fighting piracy,” he suggests, “it is a better idea to allow listeners to download music for free, and then provide the option to pay the band a voluntary donation. Many people would give money because they appreciate the musicians.”

“[Illegal online downloading] was how I was exposed to almost all of the music that I love to this day, and still that’s the easiest way to find really obscure stuff,” Pecknold said to BBC News. “I’ve discovered so much music through that medium. That will be true of any artist my age, absolutely.”

Other artists share Pecknold’s feelings. Alternative rock band Radiohead is affiliated with the Featured Artists’ Coalition, a nonprofit organization striving for a stronger relationship between musicians and fans without the overwhelming influence of the money-grubbing music industry.

In 2007, the band offered a free download of their new album In Rainbows on its website. Just as fans strive for music without financial limitations, many artists realize that the purpose of their songs is to be sung, not sold.

Our generation, with its insatiable hunger for quick information, is impatient. Until a solution is implemented, consumers will continue to download music illegally. If opposition to music piracy is not met with compromise, the quality of the way college students experience music may suffer.

An intense excitement comes from the first listen of a newly discovered song. Unless the music industry adapts to this digital age and realizes how important this kind of experience is to the masses, the industry itself will deteriorate along with its revenue.