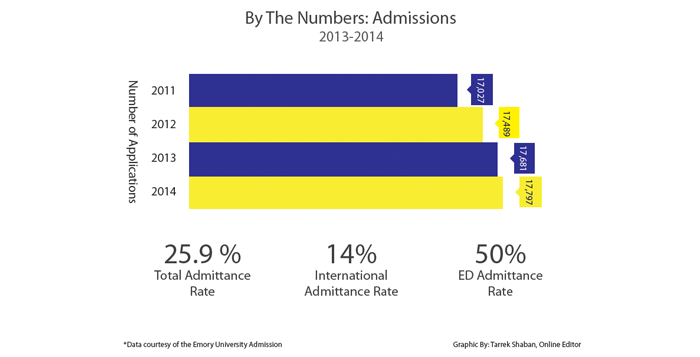 A slight increase in applications, more offers to underrepresented minority students and a larger global makeup are hallmarks of the admitted Class of 2018, according to an April 8 University press release.

This year’s admission rate stands at 25.9 percent for Emory College, down from 26.5 percent last year, according to the press release.

John Latting, assistant vice provost for undergraduate enrollment and dean of undergraduate admission at Emory, wrote in an email to the Wheel that the constant increase in application numbers over the past few years is part of a higher recognition of Emory and its quality.

“We’re seeing more students apply from places like the West Coast, the Northeast and from other countries,” Latting wrote. “In addition, we’re seeing a larger percentage of the applicant pool move from regular to early decision – also a sign that more high school students recognize that Emory is right for them.”

the top five countries represented outside the United States are China, India, Republic of Korea, Canada and Mexico for Emory College.

Latting wrote that an increase in admitted students’ diversity is a key focus in the selection process of the applicant pool.

“This year’s increase in offers of admission is a function of Emory’s success in growing the number of applications from minority students,” Latting wrote.

Latting wrote that he expects about 30 percent of the admitted class to enroll at Emory College, putting the number close to the 1,350-member goal, and attributes it to the “matchmaking process”  that early decision provides.

“Early decision allows better enrollment management, given that we build our class in stages and observe its characteristics at each stage, rather than having to do so all in one swoop,” Latting wrote. “Early decision adds energy to the class by providing us a way to identify students who would have special enthusiasm for being at Emory.”

However, Latting pointed out that the ultimate goal is to build one freshman class, and all admitted students have worked to a very high level in their in- and out-of-class pursuits while in high school.

Ultimately, Latting wrote that the Class of 2018 represents the decisions of a great team of staff, current students and also faculty and alumni, who help ensure success in this mission.

“Emory seeks students who will thrive in its classrooms and contribute to the university community,” Latting wrote. “So any admitted student should have no doubt that four years at Emory will be an incredible experience, with benefits for a lifetime.”