Another Banner Season for the Eagles 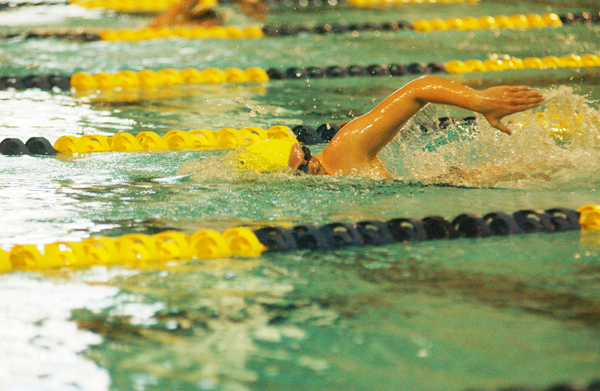 Over winter break, while the rest of Emory was at home, the swimming and diving team traveled to Sarasota to train for the season. The week of training concluded with a meet, which was held in what until recently had been a hotel pool. Everyone was exhausted from the week of hard training, and it was so cold outside that you could see your breath. The team could easily have decided that the meet was too insignificant and that they were too cold and tired to swim their hardest.

“But our team took a different approach,” senior captain Anna Dobben said. “We saw this meet as a chance to race, and that was when I knew that we would do big things this year.”

Emory Swimming and Diving did do big things this year. The women’s team won the National Championship for the fourth consecutive year, and the men finished fifth in the nation. Additionally, each squad won the University Athletic Association (UAA) championship for the fifteenth year in a row.

“Everyone really made a commitment to improve as individuals and to come closer as a team this season,” Head Coach Jon Howell said. “You have to do something special to be successful at this level.”

The women’s squad was led by the relay team of senior Renee Rosenkranz, sophomore Nancy Larson, senior captain Ann Wolber and Dobben, who won National Championships in the 200- and 400-yard freestyle relays.

The 400-yard freestyle relay was the final event of the NCAA Division III National Championships, and the women had already clinched the team title.

Yet that did not prevent Rosenkranz, Larson, Wobler and Dobben from winning the National Championship in a NCAA Division III-record time of 3:21.28, an incredible .71 seconds better than the previous record.

“It was pretty cool to know that we swam faster than anyone else in Division III ever had,” Dobben said. “It was a Hallmark-like way to end my swimming career – it was a fairytale ending.”

This is just one of a staggering number of team and individual accomplishments the Eagles compiled this year.

Senior captains Miller Douglas and Peter O’Brien led the men’s team. Douglas, who transferred to Emory after his sophomore year, won the National Championship in the 200-yard butterfly, and also earned All-American honors in the 200- and 400-yard individual medleys.

“He has been one of our top performers across the board,” Howell said. “He will graduate as one of the best we ever had, and he was only here for two years.”

O’Brien earned All-American honors in the 200-yard individual medley and the 200- and 400-yard medley relay at the NCAA Championships, setting school records in each event in the process.

Along with Douglas, he set the tone for the men’s swimming team both in and out of the pool.

“Douglas and I were able to take charge and think about where we wanted the team to go and rally the men about that goal and vision,” O’Brien said. “If you start at the top and all the seniors are doing it right, it naturally falls to the others to adopt that in some way.”

O’Brien explained that the incredible breadth and depth of the team comes from the culture that the seniors have created.

“There is an atmosphere that we have to set as leaders on the team,” O’Brien said. “There is something special about that team bond which enhances athletic performance. We are very committed, and we breed that atmosphere. When you come in, you conform to that.”
That team culture extends beyond athletic championships and honors to academic and personal success and a strong team identity.

“A lot of times people look at our program and focus on our success at nationals, but for us, it is a much more holistic approach,” Howell said. “For us, it is about supporting our swimmers in all aspects of life.”

The Eagles do this through the remarkable community they have created that serves as a network of support for the swimmers both inside and outside of the pool.

“This has been a unique characteristic of Emory swimming and is a reason people are drawn to us,” Howell said. “Your swims are more than just your individual swims. You swim for something bigger than yourself, and it brings out the best in people and makes it more fun.”

For Dobben, two moments define the nature of the Emory swimming community.

The first is the 400-yard freestyle relay at the UAA championships. Dobben was in the pool competing, and she remembers all her teammates, even members of the men’s team, outside of the pool cheering on her and the rest of her relay team.

The second was outside of the pool, when the Emory women’s basketball team hosted the NCAA Tournament and the entire swim team went out to support them.

For Coach Howell, people such as Douglas and Dobben, who as seniors provided an example to the underclassmen as athletes, teammates and people, exemplify everything that is remarkable about the Emory swimmer.

“Miller is the ideal teammate,” Howell said. “He has a lot of enthusiasm and a great work ethic. He loves his sport and he loves Emory. Anna has been the spirit behind our team – a great organizer, enthusiastic, a hard worker and she had a wonderful end to her. She has been a great leader and a great performer for us.”

The accomplishments of Emory swimmers outside of the pool are perhaps best exemplified by the five seniors who were awarded the NCAA Postgraduate Scholarship – Mia Michalak and Ann Wobler for the women, and Douglas, O’Brien and Justin Beegle for the men.
“It is a huge honor,” O’Brien said. “What is remarkable is that we all intend to genuinely enjoy our studies. It is not about achieving the mark. We have great conversations in the locker room about all sorts of things that we have learned from class. We have a great mix of athletics and academics on the team.”

Student-athletes must be nominated by their athletic department, and the award is given based on athletic accomplishments, academic success and service to the community. The NCAA awarded just 30 of these scholarships to student athletes from winter sports across all levels of NCAA competition.

“To have five seniors win the award shows you that they are taking this experience to an extremely high level,” Howell said. “I think that these accomplishments tell you the most about our program. The NCAA Postgraduate Scholarship is a testament to excellence. These awards speak volumes to their work ethic and to them performing at high levels as students and as athletes.”

The Eagles have set a high standard for next year. With 10 women and nine men graduating, a number of underclassmen will have to step up.

“I feel good about next year, but if we want to be in the hunt, we have to get better,” Howell said. “We look forward to that challenge.”