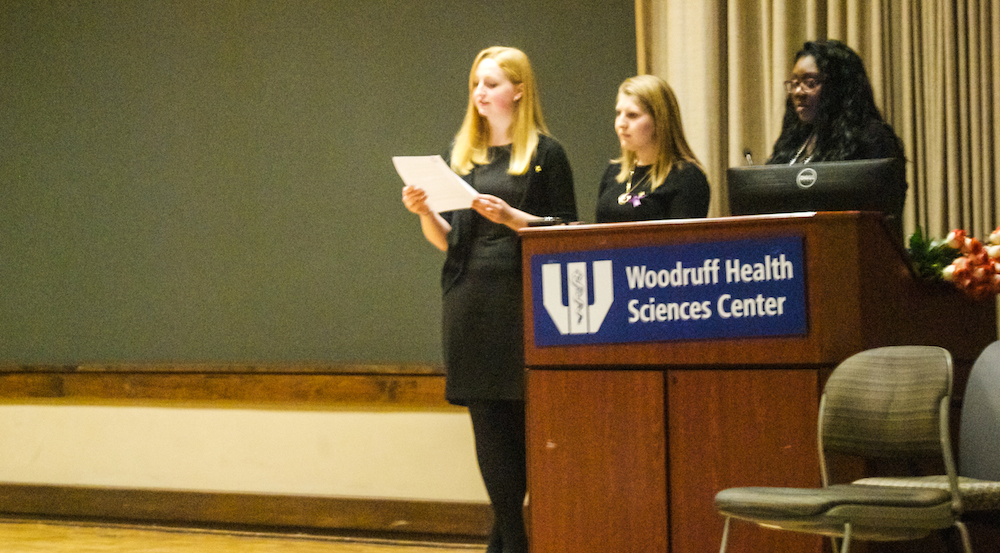 Members of the Delta Phi Epsilon sorority introduce the speaker at ANAD Week, which is aimed at bringing awareness to eating disorders. | Andrew Ie, Staff

Although 86 percent of eating disorders manifest before the age of 20, only 10 percent of students diagnosed with an eating disorder receive treatment, according to the National Association of Anorexia and Associated Disorders.

Hosting their second official Anorexia Nervosa and Associated Disorders (ANAD) Week, which ran from Feb. 23 to Feb. 26, Delta Phi Epsilon (DPhiE) Sorority aims to improve this statistic by building on last year’s weeklong event to raise awareness and money for the National Association of Anorexia and Associated Disorders, a non-profit organization that provides programs and conducts research for the prevention and alleviation of eating disorders.

While DPhiE hopes to surpass the $2,000 that it raised last year for this, one of its three philanthropies, this week is largely aimed towards education.

In addition to continuing events from previous years such as DPhiGlee, a sing-along night, and an ANAD vigil, DPhiE began new strategies to raise awareness, such as writing messages like “Be your own kind of beautiful” on mirrors in residence halls and throughout campus on Monday with the intention of focusing on positive self-image.

“Monday’s messages are to brighten people’s days around campus and remind them that they are beautiful and perfect the way they are,” College junior and DPhiE Vice President of Programming Molly Teplitzky said.

Sisters stationed themselves at special DPhiE CampusCouches scattered around campus on Tuesday to engage students in conversation about healthy body images and ideals of beauty. DPhiE had activities planned for Wonderful Wednesday, but had to cancel since school was shut down due to inclement weather. DPhiE planned a scale smashing event originally intended for Wednesday for the following day.

“Smashing scales and trashing our insecurities act as symbols of rising above our self-doubts and being sensitive to how we perceive ourselves and others,” Teplitzsky said.

Instead of hosting the karaoke night off campus, this year’s DPhiGlee was held in Harland Cinema. The event included a screening of Pitch Perfect, a movie that DPhiE believes breaks down barriers of body image and beauty and encourages individuals to celebrate themselves and others. During the event, students were encouraged to sing along with the movie instead of standing in front of their peers to sing karaoke.

The night concluded with speakers who struggle or have struggled in the past in an eating disorder. Throughout the week, DPhiE also spread information about campus resources available to students who would like to seek help to combat eating disorders.

“I really love the unity our university shows at our events due to the importance of our message,” Teplitzky said. “We hope we can continue to progress in our efforts to raise awareness of eating disorders, provide relevant resources and collect much-needed donations for the National Association of Anorexia and Associated Disorders.”

College freshman and new member of DPhiE Hannah Billing said she is inspired by the purpose of ANAD week.

“It definitely is inspiring … everyone should be able to be comfortable in their own bodies, and that’s what we’re promoting,” she said. “We’re promoting … stronger people.”

Whatever Sticks: Peeling Apart the Meaning of Laptop Stickers