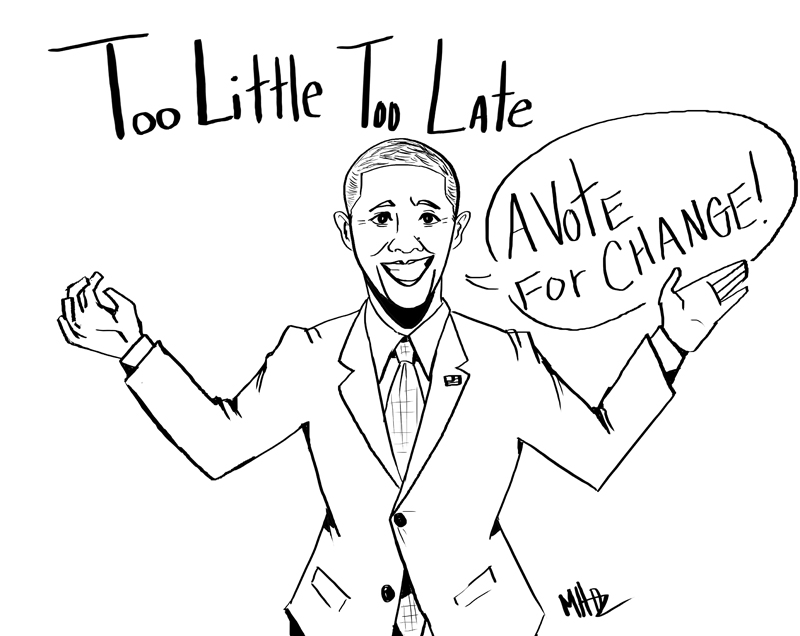 With the specter of midterm elections looming, expect fiery rhetoric and irreconcilable differences to rule the day yet again on Capitol Hill. As legislators hunker down for the inevitable battles across party lines on various hot-button issues, and with the funding and borrowing capacity taken care of for the year, the only foreseeable escape from gridlock will come from the White House. As the next eight and a half months unfold, it’ll be interesting to note whether President Obama remains seemingly intent on advancing his agenda through executive action rather than attempting, again, to play ball with Congress.

President Obama should be fully aware of the legacy of his administration were it to end today – unrealized big promises and a few partisan victories. Quoted in his first Cabinet meeting of this year as saying, “I’ve got a pen, and I’ve got a phone,” Obama must understand his statement lends itself to a much larger question: what took him so long to realize he had those powers? Several policies the President has stated as his priorities for this year have been education, immigration and business growth. As I write this piece on Feb. 22, 2014, it has been five years and 34 days since Obama took office – these issues were just as imperative 1,859 days ago as they are today. Instead, we have had for the past few years a war of attrition over the Affordable Care Act (ACA), a focus on sustainable energy with misguided funding and a stimulus package/financial-sector reform with terms that solely appealed to his voter base and have produced, at best, mediocre results. The President’s approach to resolving education has been his “Race to the Top” program, an initiative that has seen its fair share of criticism for focusing on arbitrary test results, holding teachers accountable for the aforementioned test results and not prioritizing those who are in need of such funding.

The President’s supporters will inevitably point to the fractured legislative body that he inherited, or perhaps point to other accomplishments as proof that he has made the best out of an adverse situation. This completely ignores the power that the executive branch enjoys, the responsibility of the President to lead and the facts of the situation. When he entered office in 2009, freshly minted off of a rousing victory, he was handed a Congress that saw an increase of eight Democrats in the Senate and 21 in the House of Representatives. It would be the first Congress since 1995 with a majority of Democrats in both chambers, and the momentum was squarely behind the President. Instead of blitzing a GOP that had already stated that their goal was to make him a “one-term president” with multiple issues and using the bully pulpit to push legislation through Congress, the President decided to attempt compromise with legislators, and alas, we find ourselves in our current situation. As former President Bill Clinton’s Chief of Staff and new White House senior adviser John Podesta noted in his 2010 report for the Center for American Progress, “Congressional gridlock does not mean the federal government stands still. This administration has a similar opportunity to use available executive authorities while also working with Congress where possible.” The President should have immediately realized that he held much more than simply a pen and a phone in 2009 and parlayed it to his advantage, but his reluctance to do so only galvanized his political opponents and led to the 2010 midterm elections that eliminated any potential for his executive orders to hold weight.

Regardless of one’s political allegiances, it is indisputable that a president who accomplishes more of his or her agenda is preferable to a President who waffles and leaves a lot of initiatives half-baked. The former will at least acknowledge the issues which he or she campaigned upon and address it in the manner they see best fit – the latter will simply leave the country in the same mess it was in four years ago. It is bitterly ironic that I stand here encouraging a president who based his first campaign off of “change” to take more initiative in the final years of his presidency. Mr. President, you ran on health care reform, sustainable energy and social issues – reward those who voted for you due to those promises. If you truly want health care reform, don’t delay the employer mandate portion of the ACA until 2016. If you truly want sustainable energy, stop considering the Keystone Pipeline and allocate a larger portion of the budget towards research towards alternative fuel. If you truly want to address social issues, don’t state that you support same-sex marriage and wait upon the courts and Attorney General Eric Holder to do your work – own your position.

So here we are again – pardon me if it feels like dÃ©jÃ  vu. The President’s bold talk mirrors the same rhetoric he employed in October 2011, with his “We Can’t Wait” initiative designed to prod Congress into action. The sad part of this all is that this is not written in hindsight – we have seen this coming for years. The President only needs to look at his approval numbers to realize that his re-election in 2012 was just as in great part due to the caliber of his opponent as it was due to his own accomplishments in office. This is not meant to declare the next years of Obama’s administration a failure before they even conclude, it is meant to analyze his job performance as it stands currently. Ultimately, the President needs to understand that the gridlock which has crippled Congress has the power to do the same to his legacy – his administration’s epitaph might very well read “too little, too late.”