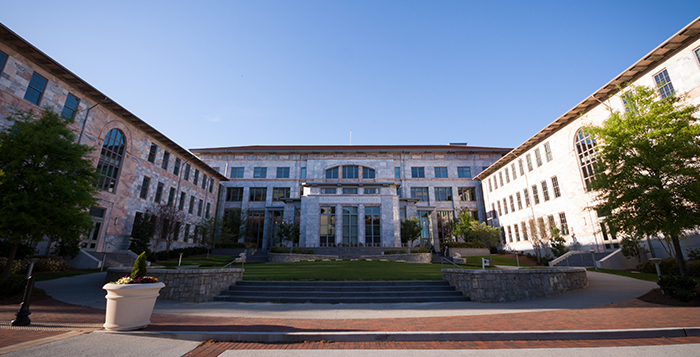 Emory alum Kathelen Amos (79C) and her husband Dan pledged $5 million to the Emory University School of Medicine to establish the Medical Student Loan Forgiveness Program in Sept. 23 2021. The program’s overarching goal is to improve access to primary care in Georgia.

While the primary care physician shortage is a nationwide issue, Georgia faces a steeper deficit than other states in the South and the U.S. as a whole.

According to Ted Johnson, chief of General Internal Medicine at the School of Medicine, there are several causes for this shortage, including lower salaries in primary care versus procedural specialties compounded by higher amounts of medical student debt. National organizations indicate that over 70% of medical students graduate with student loan debt with a median amount of just below $200,000.

The couple’s large donation aims to address this issue.

“It was an opportunity to bring two things that we were really interested in together,” Kathelen Amos said. “We are very much supporters of the Emory School of Medicine and their mission and the quality of students that they produce.”

Through the program, individuals seeking to practice primary care in Georgia for two to five years following completion of medical school training could receive between $40,000 and $160,000, Johnson said. Specifically, the program is looking to aid pediatricians, internists, family medicine and geriatric physicians.

“Because of debt and higher income in many types of sub-specialty practice, there are additional and intense pressures for those in training who would prefer to pick primary care to alter course toward specialization for higher incomes,” Johnson explained.

Kathelen Amos graduated from Emory College in 1979 with a degree in political science and in 1982 from the University of Georgia School of Law with a juris doctor degree. Now president of the Aflac Foundation, she previously worked for 20 years at Aflac as the executive vice president and was in charge of corporate communications.

Dan Amos earned an insurance and risk management degree from the University of Georgia. He has been chairman and chief executive officer of Aflac since 1990.

“We know firsthand that Georgia is lacking primary care,” Kathelen Amos said. “The number of physicians per capita is one of the worst in the country and it’s worse in the non-Atlanta area. I didn’t realize how many people that enter medical school have an interest in primary care, but, as they go forward, their student debt load becomes a very influential factor in where they end up going.”

Georgia has about 57 primary care providers per 100,000 residents, a lesser rate than both the South Atlantic (74 per 100,000) and the U.S. (76 per 100,000), the Robert Graham Center reports. The Center studies policies related to family medicine and primary care.

Though Kathelen and Dan Amos granted the donation, they “left it up to Emory leadership to develop the methodology of how it will be implemented,” Kathelen Amos said.

“We were just the ones with the idea, and they have provided the way to get it done,” Kathelen Amos said. “At some point we will look forward to meeting some of the people that participate, but we haven’t been involved in the implementation and execution of how this will work.”

In addition to forgiving loans, the program aims to create a more supportive training environment for students seeking primary care careers by providing coaching, mentoring, sponsorship and special educational and training experiences, according to Johnson.

“We intend that this community will support students, residents and physicians within the first five years of their clinical practice as they embark on a meaningful career of service,” Johnson said.

The program will allow more students who are interested in primary care to have an opportunity to go into that field without the onus of a huge debt burden, Kathelen Amos stated. She also hopes that some will end up in underserved communities.

School of Medicine Dean Vikas Sukhatme described the grant as “a transformative and visionary gift with far-reaching implications for Georgia” and said that “it could serve as a wonderful model to be emulated by others.”