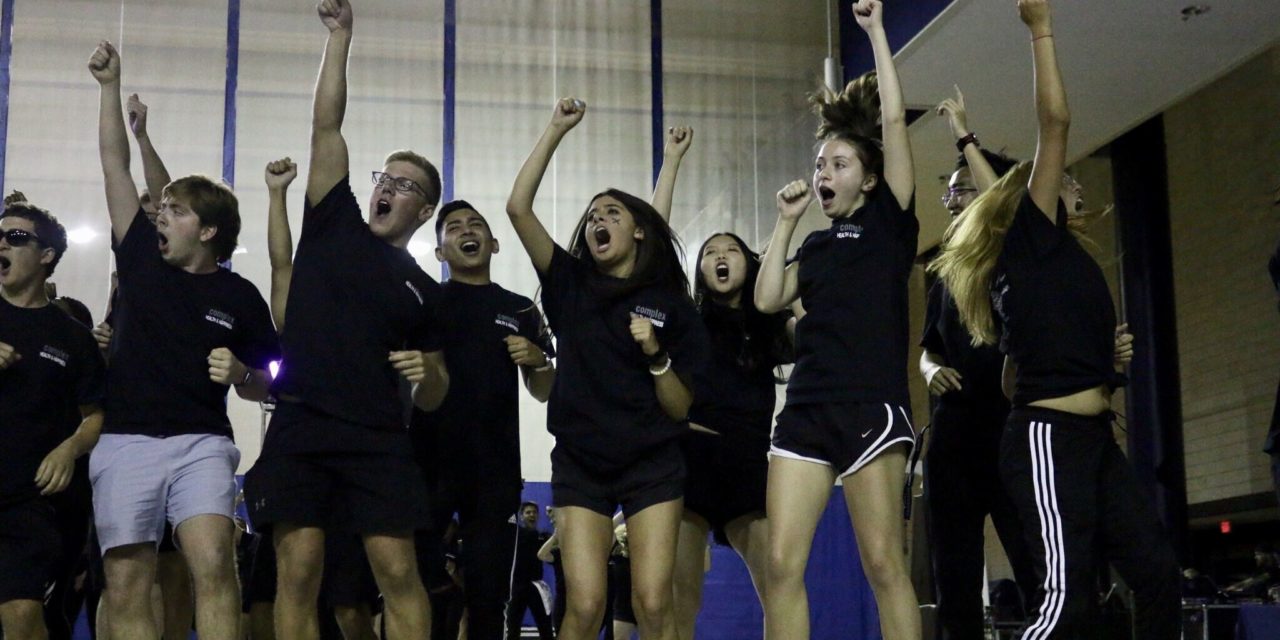 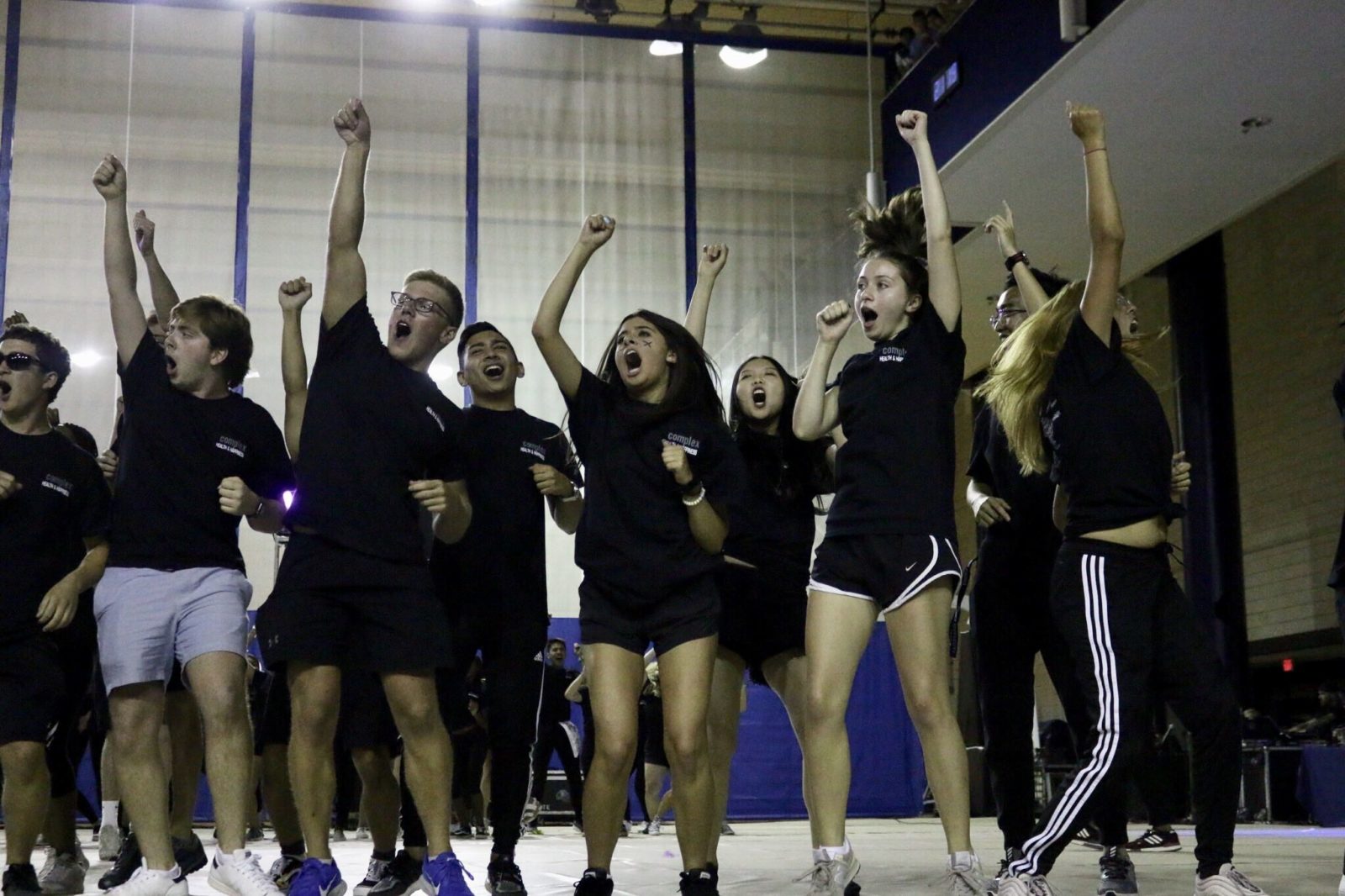 Freshmen filled the air with song and cheer at the Woodruff Physical Education Center (WoodPEC) on Thursday night. Songfest, Emory’s annual song and dance competition, saw the first-year residence halls compete against one another in friendly but fierce lyricism and dance. As the roaring crowd became quiet with anticipation, Complex emerged as the winner of the 2019-2020 Songfest Trophy, usurping last year’s victor, Alaharris.

The event primarily features choreographed dances and song parodies practiced and performed by orientation leaders (OLs), resident advisers (RAs), sophomore advisers (SAs) and freshmen. The parodies contain good-hearted jabs toward other dorms and boasts about their own dorms’ amenities. Residence halls compete for points in the Dooley’s Bowl inter-dorm competition and the beloved Songfest trophy.

Spectators filled the indoor track above the gym to its capacity, while the freshman class occupied the bleachers. Students jostled for spaces to watch, some even standing atop the back railing to catch a glimpse of the gym floor.

Songfest began with a dance led by the OLs. Though not competitors, they set the bar high, enthralling the crowd as they danced in unison to songs like Lil Nas X’s “Panini,” Billie Eilish’s “Bad Guy” and MC Hammer’s “U Can’t Touch This.”

Among the OLs was Jose Amador (20C), the student coordinator and second-time Songfest attendee.

“I’m from Oxford, so to me, Songfest is a way to see how the other side of Emory does Orientation,” Amador said. “This year, I was the student coordinator. Putting in all that effort and seeing it come to fruition was really fun.”

After a performance from the orientation leaders, the competition began. Dobbs started off with its residents adorned in yellow caution tape as they danced and sang. They ended the night with the award for Best Banner. The banner featured a brightly illustrated depiction of Dooley in a space suit, Emory’s crossed torches held by human arms and a fearless Eagle swooping over a mountain landscape, all encompassed within the three white arches of Dobbs Hall.

Hamilton followed Dobbs with a performance that won them the Best Lyrics award. Hamilton’s well-orchestrated dance moves came to a halt to make way for a spirited step routine that lifted them into third place overall.

Then it was Longstreet-Means Hall’s (LSM) turn to perform. Residents poured out of the bleachers, which LSM had decorated with national flags to match their theme of “Global Cultures.” Aligning themselves to form the letters L-S-M, the residents performed parody versions of Kesha’s “Tik Tok,” Britney Spears’ “Circus” and Lizzo’s “Truth Hurts.”

Alaharris, the combination of Alabama and Harris halls, followed LSM. As last year’s champion, Alaharris made up for their small population size with their powerful spirit and excellent coordination as they parodied songs by Britney Spears and ABBA, as well as from the Disney movie “Mulan.”

Complex’s performance saw the huge crowd of freshman residents form a giant letter X as they danced to parodies of Queen’s “We Will Rock You” and Neil Diamond’s “Sweet Caroline,” among others. Complex’s superior numbers certainly helped them to victory, but it was the residents’ unified coordination and passion that made them stand out from the competition.

Elijah Chou (23C) was thrilled to call himself a resident of the winning hall.

“We worked so hard and put in so much effort,” Chou said. “For it to turn into a win that everyone shared, that’s the best feeling you could ever get as one complete team.”

Though Hamilton won the award for Best Lyrics, Complex’s parodies also featured memorable jabs. In one riff off of Hamilton’s “Going Green” theme, Complex suggested that the hall recycle their “trash talk.”

Raoul Hall was last to perform, with songs based on Mariah Carey’s “All I Want for Christmas” and Soulja Boy Tell’em “Crank That (Soulja Boy).” The hall’s floor formations — a W for “Win” and a crown — helped them earn second place overall. Raoul also won Best Soloist and Best T-shirt, but the two awards weren’t enough to top Complex’s coordinated dances and lyrical attacks.

The competition culminated in a one-on-one dance battle between Raoul and Complex. Daryl Nana Tangpi (22C), an SA from Raoul Hall, Elijah Chou (23C), an SA from Complex, who did backflips to rile up the crowd. Tangpi demonstrated a greater diversity of moves as the loudspeakers blasted Lil Nas X’s remix of “Old Town Road” featuring Billy Ray Cyrus. With a split and the whoa among his dance moves, Tangpi came out on top to win the Best Soloist award for Raoul.

Other guests included mascots Swoop and Dooley, who reminded viewers that professors and students may come and go, but “Dooley is forever.” Dooley danced alongside the OLs to “Spooky Scary Skeletons” by Andrew Gold.

At this year’s Songfest, as with previous years, the bonds of community and spirit outshined the rivalries, setting the class of 2023 down the winding path to graduation with a worthy celebration.

Correction (9/5/19 at 8:03 a.m.): A previous version of this article incorrectly stated that an SA from Complex Peter Lee (22C) competed in a one-on-one dance battle during Songfest. In fact, it was  an SA from Complex Elijah Chou (23C).