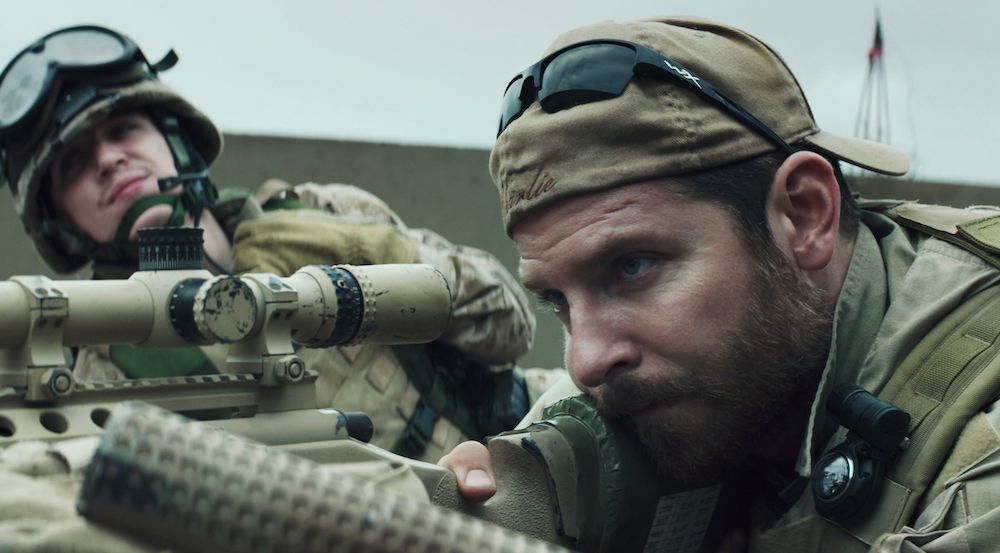 Is there anything Clint Eastwood can’t do?

The film, which premiered nationwide on Jan. 16, earned a whopping $105.3 million at the box office during its first weekend.

The film follows the life of Kyle from his days as a rodeo cowboy to his Navy SEAL training to becoming the most deadly sniper in American history. Kyle has over 160 confirmed kills and dozens more unconfirmed, making him both a protective force and a threatening weapon; something to be revered and feared.

The depiction of the struggles and hardships faced by many members of our country’s armed forces is both haunting and eye-opening.

[quote_box name=””]Equal parts tragic and touching, viewers will leave the theater inspired, grateful and proud to be an American.[/quote_box]

The trauma of taking a life doesn’t disappear when a soldier returns stateside, the stress stays with them and, in many cases, inhibits their ability to live a normal, carefree life.

In addition to the strong backstory, Cooper, who gained 40 pounds of muscle to play the role, is at his best.

A far cry from Cooper’s role as Phil in “The Hangover” trilogy, his role as Kyle was unexpected.

Nonetheless, Cooper is perfect for the role convincing viewers, with stuttered lines and slight body movements, that though he is a strong military man he is vulnerable and broken in ways others cannot even begin to understand.

He was the perfect amount of loyal, unsettled and confused that one would imagine a sniper to be. For example, at one point Kyle admits to a therapist that he “will meet [his] creator and answer for every shot that [he] took.”

This loyalty, strength and determination are just only small facets of a complicated character.

Though Kyle is sure of his role as protector of his fellow servicemen, he struggles with being away from his family and making difficult decisions.
For instance, there is one particular scene near the beginning of the film where a small child is handed a grenade by his mother.

Kyle must decide whether to let the child run with the grenade towards a group of American soldiers or whether to take the young life before it can do damage to the men whose lives Kyle is protecting.

He even says that “what haunts him, is all the guys he couldn’t save.” Loyal to a fault, some would say; but everyone has faults.
Cooper truly deserves an Oscar for his portrayal in this film.

Another notable performance is that of Sienna Miller (“Foxcatcher”), who played Kyle’s wife Taya.

She played a character everyone felt for and yet couldn’t understand. Though it was easy to understand Taya’s desire for Kyle to stay home and raise their family, it was infinitely easier to understand and accept Kyle’s desire to fight for and protect his country.

And yet, Miller’s role was complicated because while everyone can sympathize with a wife raising her children alone while her husband is fighting overseas, her wanting him to stay home seems selfish.

Regardless, Miller does a phenomenal job truly making audiences feel her pain. Every second of the over-two hour movie was an entertaining and thrilling roller coaster of emotions. The film is educational and relatable.

Though “American Sniper” was recently bashed for only showing select parts of Kyle’s life and struggles, there is no denying that Kyle is a hero.
America came to love him, something that is impossible not to do once you hear his story.

Equal parts tragic and touching, viewers will leave the theater inspired, grateful and proud to be an American.

The film provides those of us at home with a new perspective allowing us to take action and do things we may not have done before.

For example, when I saw a soldier at the Hartsfield-Jackson Atlanta International Airport, I extended my hand and said, “thank you for your service.” We have no idea what they go through over there to keep us safe here at home.

This film gives us only a small appreciation for those men and women who risk their lives every day for our safety.

All things considered, though the film is, at times, tough to watch, everyone should see this movie.

The more people this film reaches and touches, the more our servicemen and women are thanked for their efforts and the more appreciation United States citizens will have for the freedom that we so easily take for granted.