The 11th season of NBC’s “American Ninja Warrior” returned to Atlanta for the second time on July 22nd for the city finals of the fast-paced competition. Filming took place behind Mercedes Benz Stadium at the Home Depot Backyard. Despite a multi-hour rain delay, dozens of passionate fans came out to support the 34 qualifying competitors.

Co-hosts Matt Iseman and Akbar Gbaja-Biamila praised Atlanta’s exciting atmosphere and talented ninjas in a conversation with the Wheel.

“Atlanta is growing in the entertainment space, it’s growing in the ninja gyms that are popping up in the Atlanta region,” Gbaja-Biamila said. “[In] the southeast region, ninjas are making a big presence. It’s going to be one of our better episodes because Atlanta brings the heat.”

Iseman reiterated that Atlanta, like Miami, is becoming a major national hotbed for ninja gyms, where experienced ninjas teach newcomers and future competitors. Iseman said the new gyms have cultivated a culture of mentorship for burgeoning ninjas.

“Ninjas get better together,” Iseman said. “They share technique [by] teaching others, and Atlanta has become that, where these athletes are reaching their peak.”

Gbaja-Biamila noted that he is consistently amazed by the talented athletes on the show. He added that the skills required to run an obstacle course are far different from those required by other sports.

“You can be mentally strong, but if you don’t have any obstacle course awareness, you’re gonna go down,” Gbaja-Biamila said. “It’s 90 percent mental and 10 percent physical.”

Even Gbaja-Biamila, a former NFL defensive end for the Oakland Raiders, San Diego Chargers, and Miami Dolphins, experienced difficulty training to compete in a celebrity edition of the show, Celebrity Ninja Warrior, in 2017.

“My first day of training lasted 30 seconds,” he said. “I couldn’t hold myself up. I was working muscles I never worked before. I had never felt nervous like this before.”

Connecticut gym owner Drew Drechsel blazed through the course with one of the fastest ever times in a city course at 3:37. In second was Kevin Carbone, a tennis coach from Alpharetta, Ga. who also won a fan contest to design the Wingnuts obstacle, requiring ninjas to jump and grab multiple anchor-like objects in succession. Carbone completed the course with a time of 4:50.

As the top two finishers, Drechsel and Carbone faced off in the Power Tower, a 40-foot hanging course involving numerous successive grappling and climbing obstacles. Drechsel won comfortably to earn the coveted Safety Pass, which allows him to redo the Las Vegas course’s initial obstacles in case Drechsel falls off an obstacle. In doing so, Drechsel, who is competing in his ninth season, further cemented his status as a fan favorite.

Despite losing to Drechsel in the Power Tower, Carbone won fans over with one of the most adept moves of the night, scaling the infamously steep Warped Wall by landing an audacious 360 spin and hoisting himself up. Carbone is the first ninja in the show’s history to have attempted the move, and said he has enjoyed practicing such spins in training. His move, which won him no additional points, did not go unappreciated by the boisterous crowd, who cheered the ninjas on until 5 a.m. despite rain-related filming delays.

Meanwhile, the rain made certain obstacles which involved traction, such as the Spider Trap, much more difficult to scale. New obstacles Off the Hook, which required ninjas to grab two bars in mid-air and land on a rack, and Ferris Wheel, where ninjas climbed two spinning wheels, proved their formidability in both the qualifying and the Atlanta finals.

“This course is so much harder than any we have ever had,” Iseman said about the new obstacles. “Atlanta was unbelievable in their performances.”

The episode represented Atlanta well. Jessica Clayton, who serves in the Georgia National Guard, earned a spot in the Las Vegas finale along with Caitlynn Bergstrom. Before the competition, the Morehouse College Omega Psi Phi Hop dance team hyped up the crowd with intense performances before competitors took to the course.

The top thirteen male finalists, along with the top two female finalists will compete for a $100,000 prize and the title of Last Man Standing in Las Vegas later this year. 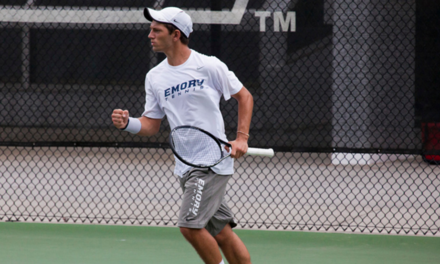 Men’s Tennis Goes 2-1 During Away Weekend 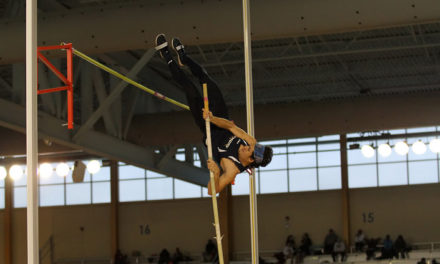