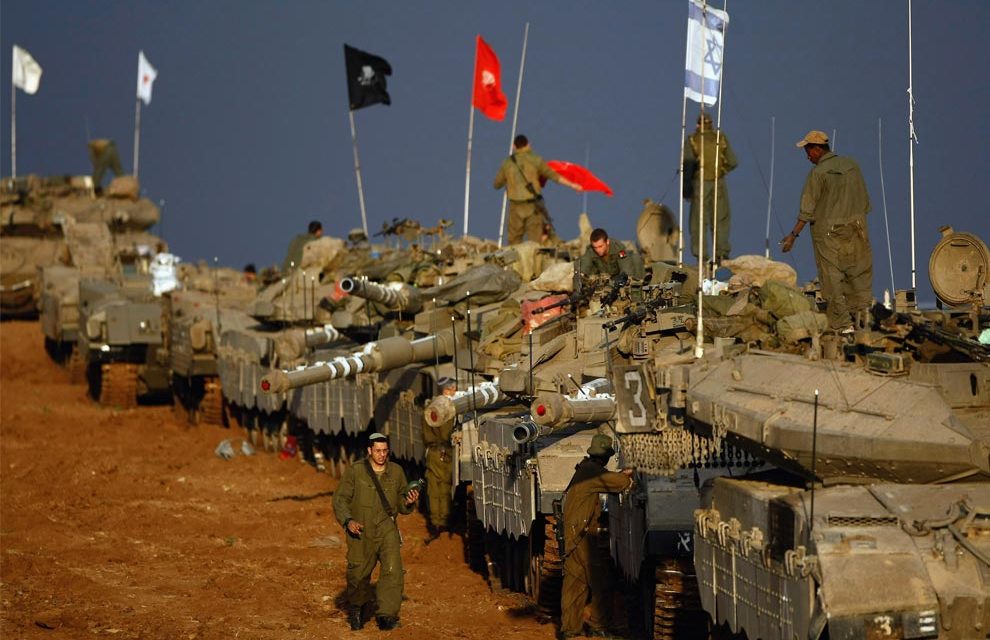 British art critic and novelist John Berger said: “Never again will a single story be told as though it were the only one.” He must not have had the American political discourse in mind. Where a narrative begins and what details are dwelled on, passed over or simply ignored have political implications. By analyzing the widely accepted story about the events this summer in Gaza, searching for its absences and questioning its assumptions, a counter-narrative can be told that is more holistic and closer to three too often forgotten realities – occupation, siege and oppression.

Three teenage Jewish boys were kidnapped in the West Bank and later found killed – unquestionably a tragedy. Rockets suddenly started showering into Israel by the hundreds from Gaza, and Israeli Prime Minister Benjamin Netanyahu was forced to meet fire with fire. Would you watch someone attack your home with your hands in your pockets? Doesn’t Israel “have a right to defend itself?” Here the story diverges slightly. If you read and listen to the liberal press, all the innocent dead are the unfortunate consequences of a just war; we should document their deaths to honor their lives and teach us all a lesson about the horrors of war. If you prefer the right-wing underbelly of mainstream political discourse, it’s all Hamas’s fault for using “human shields” (Netanyahu’s “telegenically dead”) and rejecting a ceasefire or, if you venture into very dark places, it’s really the Gazan citizens’ fault for electing Hamas. So runs the official tale.

There is no better testament to the hegemony of the discourse than the resolutions unanimously passed by the United States Senate, valiantly affirming Israel’s right to defend itself against “unprovoked rocket attacks from the Hamas terrorist organization.” Apparently, not even the progressive darlings Elizabeth Warren and Bernie Sanders could muster enough courage to do anything more than meekly refrain from signing.

I don’t mean to suggest that dissent is absent among the American political class, intelligentsia or journalists. Rather it comes either with a wink and a nod or through cracks and in whispers. President Obama has feebly objected that, though Israel certainly has a right to defend itself, perhaps it shouldn’t be killing so many civilians or attacking so many United Nations (U.N.) shelters. The fact that they are U.S.-supplied weapons is ignored, as the irony would be too difficult to handle. Coming from the single dissenting vote against a U.N. Security Council resolution to establish war crime investigations in Gaza, the keen observer knows just how to interpret moral statements of this sort – as hot air.

As for the media, non-corporate news and occasionally NBC have aired intelligent and pointed critiques. According to a leak obtained by The Atlantic, an unknown higher official from the State Department has secretly called Netanyahu a “chickens–t” for not attacking Iran­ – perhaps a statement only war hawks on the extreme right can sympathize with, but a rare criticism nonetheless. A final example: During the height of the air attacks on Gaza, Secretary of State John Kerry let one slip on hot mic, stating, “it’s a hell of a pinpoint operation.” In a subsequent Fox News interview, he spent more than a few moments repenting for his sin.

What about the pinpoint operation? Netanyahu, spokesman Marg Regev, Lt. Col. Peter Lerner and a host of other Israeli officials have consistently insisted that “the Israeli Defense Force does not target civilians.”

According to the U.N., when the dust from this summer’s violence cleared, 2,133 Palestinians were dead. Of the 1,771 who have been identified, about 84 percent are believed to have been civilians (1,489 total), 15 percent were militants (282 total) and about 28 percent of all deceased were children (500 total). One of the more poignant atrocities occurred on a Gaza City beach where Ahed Atef Bakr, Zakaria Ahed Bakr, Mohamed Ramez Bakr and Ismael Mohamed Bakr were shelled as the four young boys, all between the ages of nine and 11, kicked around a soccer ball.

This time the mainstream media couldn’t ignore or easily dismiss the slaughter as it happened right in front of a hotel where western journalists were staying. Lerner later told the Australian press, “We had visual surveillance, clearly, to an extent that we should have been able to determine who was on the beach.” Aside from young boys and soccer balls, targets – or, if you prefer, collateral damage – included homes, businesses, hospitals, Gaza’s single electrical power plant and U.N. Relief and Works Agency shelters for the frightened and displaced. Simple people not as educated as the Israeli state’s luminaries might be forgiven for suspecting that the attacks were indeed pinpointed not on militants specifically but on anything that moves.

The threat to Israel’s security? It can’t be ignored, but it can be overstated. Hamas is equipped with inaccurate Soviet-era weaponry, while Israel has a technologically advanced modern army. Once the proportions are duly considered, the operative thought experiment shifts from “what would you do if you were being attacked?” to “would you slaughter someone who is attacking you with the geopolitical equivalent of a bobby pin?” Nevertheless, the lethal rockets kept firing and no doubt something had to be done; on this point, philosopher Noam Chomsky’s remarks at the U.N. in October are definitive: “I agree … Everyone has a right of self-defense. But that’s not the question. The question is: Do you have a right of self-defense by force, by violence? The answer is no for anyone, whether it’s an individual or state, unless you have exhausted peaceful means. If you won’t even permit peaceful means, which is the case here, then you have no right of self-defense by violence.”

And, finally, those “unprovoked rocket attacks?” As stated, the preferred beginning to the official story of the conflict, when the news cameras started rolling and where most commentators begin their analyses, is in June with the kidnapping and murder of the three teenage boys – Eyal Yifrach, Naftali Fraenkel and Gilad Shaar.

The arbitrariness of the starting point is clearly shown by the fact that in May of the same year, also in the West Bank, two Palestinian boys were killed and others were wounded by Israeli police. Beginning with single acts of aggression on either side is useless; it leads to a debate about who killed whom first, reaching at least as far back as 1948 with the establishment of the state of Israel.

Explanations should begin with the contexts within which individual acts of aggression are situated, the relevant contexts here being primarily the siege of Gaza and secondarily the occupation of the West Bank; they surround the conflict like water in a fish bowl. Violence is always a response to them; if not a calculated political rejection, then a reaction to indignities suffered; if not a conscious act of suppression, then a result of systematic devaluation and control of Palestinian life.

The siege on Gaza makes a normal life, of which Netanyahu sometimes feigns concern, nearly impossible. Siege means an inability to trade or cross borders, which in turn means hunger, stalled development, an unemployment rate that is nearly 50 percent and a lack of self-determination – in short, an attack on dignity and an attempt to domesticate hope. Controlling everything that enters and leaves Gaza, Israel has even gone so far as to count the number of calories per capita to ensure survival but prevent flourishing.

To quote Dov Weisglass, an advisor to a former Israeli prime minister, “the idea is to put the Palestinians on a diet, but not to make them die of hunger.” This condition is the “quiet-for-quiet”, the norm to which Netanyahu often expressed desire to return. Resistance, however, is universal, and Gazans were able to build underground tunnels across the Egypt border to smuggle concrete, fuel and other necessities. Other less positive, more violent forms of resistance like this summer’s rocket attacks have also, unfortunately, been used. The new Egyptian regime’s destruction of the tunnels in 2013, by reducing fuel imports into Gaza, only worsened the effects of this summer’s attacks.

This brief gloss of Israeli state terror demands a final refinement of the initial thought experiment: “Would you use overwhelming force to squash resistance to your control of someone else’s home?” Notice that the morality of the resistance is strictly irrelevant; the issue is whether or not one is willing to be an oppressor, and whether destruction is a proper response to violence in which one is implicated.

I prefer facts and figures to abstractions and generalizations. If facts speak for themselves anywhere, they surely do in Israel and Palestine. But lest I be misunderstood, I will make one more claim. Though this editorial is clearly written from the perspective of someone who, to quote dissident historian Ilan PappÃ©, “sympathizes with the occupied not the occupier,” my goal has neither been to compare atrocities nor distribute blame. Rather it has been to unsettle the accepted lines – to tell a story of oppression and resistance rather than terrorism and defense. “Oppression” and “resistance” say nothing about good and evil – individuals on both sides of the border have committed terrible, violent acts. These are two sociological categories which have the virtue of accounting for many of the details supporters of Israeli state violence prefer to ignore or forget. In this case, the Gazans, but the Palestinians more broadly, have experienced decades of state-sponsored oppression. Anyone who ignores this context to portray Israel as a noble defender is, if we’re being polite, an inadequate or crafty storyteller and, if we’re being honest, a duped or vulgar propagandist.

Charlie Price is a College senior from Oxford, Georgia.