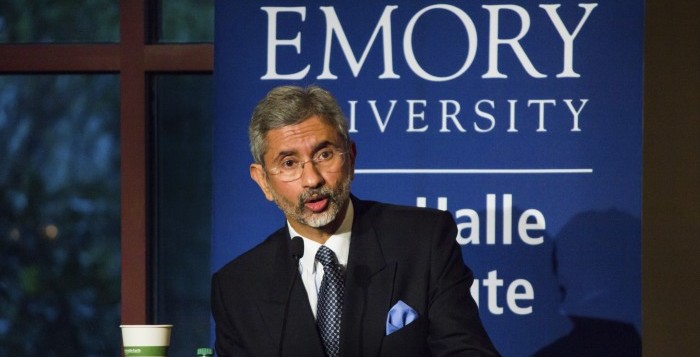 Current Indian Ambassador to the United States Subrahmanyam Jaishankar held a discussion on the growing relationship between India and the U.S. on Nov. 19 as part of Emory’s Halle Institute for Global Learning’s Speakers Series.

The event, “India and the US: Taking the Relationship Forward,” which was open to the public, was held at the Emory Conference Center, and focused on the history of the U.S.-India relationship and the bilateral moves Jaishankar believes make the most sense for the interests of both countries.

In his eyes, a growing India needs U.S. investment and strategic support, especially in infrastructure, while the U.S. needs India to hold onto its strategic position and primacy in the continent.

The Halle Speakers Series brings leading politicians, journalists and public policy makers straight to Emory students, professors and the larger Atlanta community with the purpose of providing knowledge on current global affairs directly from the source.

“We are developing a new global strategy at Emory, and India is one of the priorities,” Philip Wainwright, vice provost for international affairs at Emory and the director of the Halle Institute for Global Learning, said.

He began his remarks after a welcome by Wainwright and an introduction by Marion Creekmore, the former U.S. ambassador to Sri Lanka and the Republic of the Maldives and distinguished visiting professor of history and political science, with a brief history of Indo-American relations and then with a recommendation regarding what he would like to see moving forward.

“My own sense is the more we push the relationship, the more possibilities will open up,” Jaishankar said.

Jaishankar explained the potential progress he sees for both nations in the fields of education, health and, especially, business.

“The main [business] priorities are to expand manufacturing, create more jobs, train people, expand our skills development and create a better infrastructure so that we can attract investments necessary for manufacturing,” Jaishankar said.

Jaishankar explained the current social state in India as well as his personal experience growing up in the nation under an ultra competitive environment, in response to a question from College sophomore Mary Hollis McGreevy. He briefly explained what it meant to him to stand out against one’s peers in a setting where everyone is applying to the same schools, programs and activities.

The ambassador answered questions about the nature of the relationship between India and China.

He discussed potentially doing more business with China, both literally and metaphorically, and working on new social issues together as neighbors.

Kritin Mehra, a College sophomore from New Delhi, India voiced his concerns regarding barriers in the Indo-U.S. relationship.

“I do not think that there are any obstacles as such to the relationship,” Jaishankar said in response to Mehra’s question. “I don’t say this just because I’m the ambassador. I actually genuinely believe this as well.”

Dr. Indran Krishnan, an Emory clinical professor of medicine in the division of digestive diseases, said he is optimistic following Jaishankar’s presentation.

“I like the way he said the U.S. will realize a relationship with India is going to be beneficial for our futures,” Krishnan said.

Creekmore made it clear that this was the first of future visits he hopes Jaishankar will make to Emory.

“India has been an area of significant engagement at Emory for a long time,” Wainwright said. “It makes sense to engage with Jaishankar and other Indian diplomats.”