If you’ve recently found yourself stumbling around the sprawling maze of restaurants in Buckhead, you might have noticed a contemporary restaurant tucked underneath the high-rise office buildings. Alma Cocina, previously only found in downtown Atlanta, expanded its modern Mexican and Latin American cuisine to Buckhead’s posh population on Feb. 4. As an avid fan of tacos and guacamole, I knew I had to give this place a try.

I dragged my boyfriend to the restaurant on a freezing Friday night. The hostess led us to a homey corner booth facing a wall of hanging plants. The open setup and high ceilings create a spacious environment for customers, and soft music enhances the relaxing ambiance. We ordered the fire-roasted salsa as our appetizer. Much to my chagrin, the guacamole was a whopping $11, whereas the salsa was only $4. In lieu of typical chips, Alma Cocina serves its salsa with delightfully flaky tostada shells. The salsa had a pleasantly earthy taste with a kick of spice, and its consistency was perfect — not too watery, not too chunky. We devoured the tostadas and our waitress brought over another bowl of them completely free of charge.

Pleased with our appetizer, we ordered our entrees. I picked chicken tinga verde street tacos, which contain chicken chorizo, pico de gallo and crema. The dish was $15 for three small tacos and a side of rice and beans. I don’t like beans, so I substituted them for an extra serving of rice for no extra charge. I also ordered a side of confit marble potatoes, which contain queso fresco, crema and pico de gallo.

The food arrived quickly. The entree presentation was neat, with the three little tacos surrounding a bowl of green rice. The tacos were juicy with a spicy aftertaste. However, there was a problem once I began to eat: the tortilla encasing my treasured meat was as flimsy as a wet piece of toilet paper. The taco became unappetizingly soggy within minutes, likely because of the watery crema seeping into the thin tortilla. It quickly began to tear until, one by one, my tacos broke at the seam and the meaty mix inside spilled onto the plate like a pile of guts. I had to resort to eating the chicken with a fork, and it just wasn’t the same. 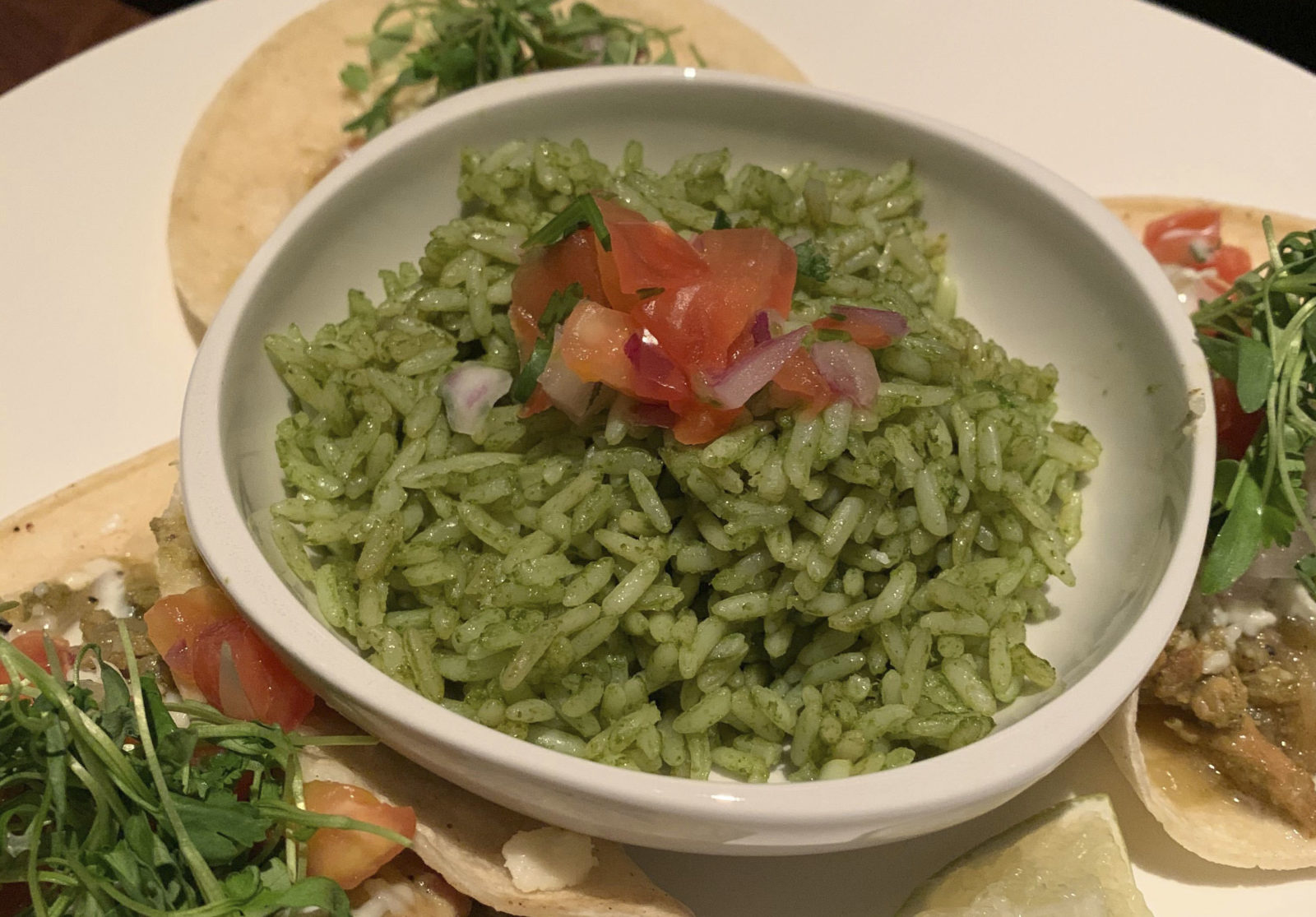 Disappointed, I moved onto the rice and potatoes. The green rice excited and intrigued me– I’ve never eaten rice this color. But with my first bite, I realized that there was a crucial point that the menu failed to mention. The rice was heavily seasoned with cilantro. There are two types of people in this world — those who love cilantro and those who wish it would burn in the fiery pits of hell. I fall into the second category. I still ate a little of the rice, but I was sad while doing so.

To placate myself, I moved onto the other side we’d ordered: the confit marble potatoes, which I first mistook for meatballs. The potatoes were my favorite part of the meal and were still steaming when they arrived at the table. I had to blow on them to cool them down but once I took a bite, I was delighted. It was like eating cheesy potatoes. The crispy skin provided a crunchy texture in my mouth, and the potatoes were perfectly cooked through. However, the potatoes that weren’t lucky enough to be blessed with cheese were, for the most part, dry and tasteless. Luckily, there was still enough cheese to go around.

My boyfriend ordered whole goat barbacoa street tacos for $17. They contained tomatillo arbol, cilantro, onion and goat. The waitress explained that traditional Barbacoa cooking, which roasts meat in an underground oven,  was not possible in Buckhead due to space, so instead, they cooked the goat for several hours to mimic the flavor of the barbacoa. My boyfriend reported that the tacos lacked flavor, with only a mildly spicy kick. Although he enjoyed the large quantity of meat on his plate, he lamented that he couldn’t taste any of the other ingredients that were mixed with the goat. His tacos fell apart as well.

I ended my meal with mixed emotions. On one hand, I loved Alma Cocina’s atmosphere and service. Our waitress was wonderful and incredibly attentive, filling our waters whenever they dipped below the halfway level, and answering our stupid questions (my boyfriend asked if the goat taco contained goat) with patience and kindness. However, the food failed to live up to Alma Cocina’s self-proclaimed title of a “destination dining experience to remember.” The food was average and not worth the price tag, and the only thing I’ll probably remember about my dining experience is my lingering disappointment.