All ‘Victor Frankenstein’ Raises Are Questions — Mostly, “Who Wanted This?” 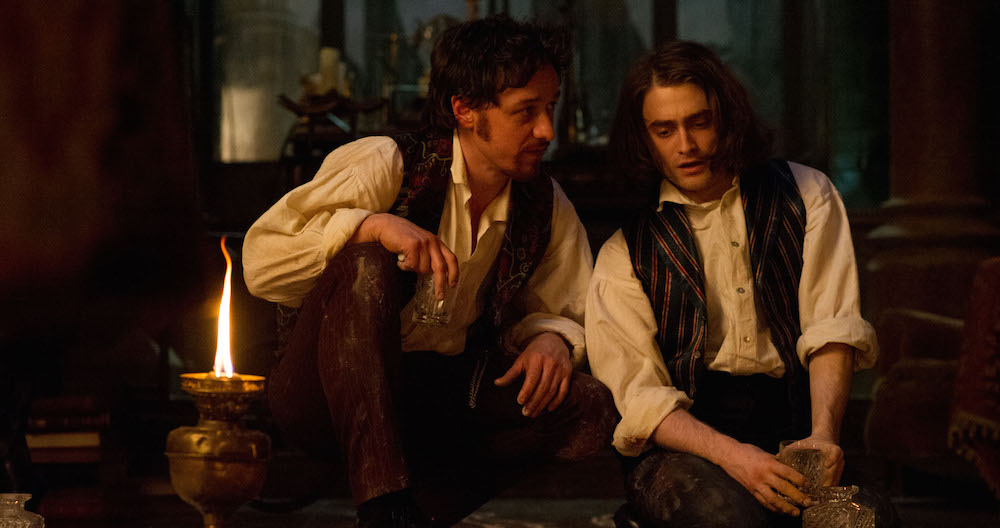 Let it be said that I certainly understand the initial appeal of this film.

The young folks love Sherlock, the sexy, modern adaptation of the Sherlock Holmes character over at the BBC that made a star out of Benedict Cumberbatch and rocketed forth the career of Martin Freeman. It was only a matter of time before other folks decided to bite the aesthetic. The story of Frankenstein was apparently a surprisingly natural fit.

So, take the director of a number of Sherlock episodes, Paul McGuigan, add a couple of Sherlock cast members (most notably, Andrew Scott) and go talk to celebrity screenwriter (an oxymoron if there was ever one) Max Landis and see if he’s got a script that updates the story. Surprise, he does. And of course, throw in a sprinkling of vague homoerotic tension between its leads.

It’s a recipe for at least modest success (when made on a low budget and released at a decent counter programming weekend). Except that it missed one crucial element in the whole thing: a reason anybody involved wanted to tell this story.

Victor Frankenstein is a canoe without a paddle, a film that is absolutely missing any valid reason to retell this story. Seemingly at odds with its own existence (much like the monster of the story), there are too many competing ideas of what this film is and what’s going to happen within it.

Victor Frankenstein is a story you’re likely all too familiar with. A mad scientist, Victor Frankenstein (James McAvoy), with the help of his loyal assistant, Igor (Daniel Radcliffe), seeks to defy God Himself by resurrecting the dead and creating life from nothing. Naturally, it goes horribly wrong, teaching the scientists the hubris of man and the importance of life.

The story features a few permutations, of course. Igor is not a permanent hunchback, but is quickly (by way of a back brace Igor wears throughout the film) turned into a handsome Radcliffe-looking fellow who’s also a brilliant anatomist with expertly steady hands. He’s in love with a woman named Lorelei (Jessica Brown Findlay), a society girl and acrobat who he saves early in the film. Igor’s quick and clever medical attention to Lorelei draws the attention of Victor Frankenstein, who seeks to recruit him as an equal partner in his life-creating endeavors. And our scientists are on the run from a religiously extreme inspector (Andrew Scott) who seeks to stop Victor Frankenstein because of the threat he poses to the idea of God.

On the surface, a lot of these ideas seem like an interesting modern update to the story. They give the original story a bit more layering and specificity. This is to screenwriter Max Landis’ credit, as this is his specialty. Films like Chronicle, American Ultra and a number of unproduced ideas and concepts show his penchant for reinvention and original permutations of existing concepts.

But having read Landis’ original script draft, it seems as though somewhere along the way, someone excised whatever was ultimately interesting about Victor Frankenstein. Or more accurately, lost sight of what was interesting. Perhaps it was the studio, perhaps it was the director. But whatever it was, Victor Frankenstein just ended up not working.

I’m inclined to blame the director. While McGuigan found a niche directing Sherlock, he clearly hasn’t brought the lessons to the big screen. If you want a masterclass in how not to direct a movie, watch Victor Frankenstein.

Directing is about pulling the elements of a film together to make a coherent whole, and that simply hasn’t been done here. For starters, this film isn’t coherent. While the scene to scene connections work, the simple geography within the scenes themselves, especially in the action sequences, is confusing. It’s hard to draw A to B to C in scenes where anyone is moving to understand how people are interacting. It leaves you, especially early on in the film, simply absorbing a series of images and trying to piece them together later.

The actors also don’t seem to be informed that they’re in the same film. Or more pointedly, whether it’s deliberate or not, McAvoy seems to believe he’s in a much campier film than the rest of the cast. While McAvoy chews and gnaws on every line and spits it back out like gasoline with a match in front of it, every other actor seems desperate to underplay as much as possible. Radcliffe seems to make it feel deliberate, but everyone else just seems to be sleepwalking, especially Scott, who brings none of his famous Sherlock scene-chewing to this role to make the film feel like it has a pulse, a spark of energy or a nerve ending.

Most unfortunately, Victor Frankenstein has no idea what it wants to be. There are moments of comedy and drama, a sudden whiplash into a horror scene and sci-fi elements mixed with period piece work. It’s pitched and written like a particularly intelligent B-movie, but shot and directed like a modern genre picture. There are too many cooks and none have the ingredients to make anything tangible.

I want to like Victor Frankenstein, I really do. I’m a sucker for the story and I want to encourage updates of the constant permutations of our cultural histories. And I also really am fascinated by Landis’ career and his actual screenplays, even if the movies made of them haven’t always clicked (see: this one and American Ultra.)

But if you’re going to take anything interesting out with nary an ounce of decent filmmaking to be seen, then I can’t imagine enjoying this movie. Maybe Max Landis needs to learn how to direct his own scripts, because very few others seem to be able to successfully understand them.