All He Does Is Win: Don’t Doubt Davis 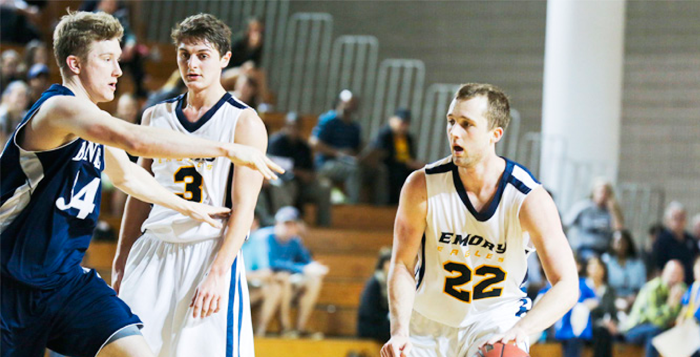 Now that the men’s basketball season has officially concluded, it’s time to honor one of the program’s all-time greats: senior Jake Davis. In what was a truly illustrious career, Davis set many program records and led the team to new heights, including a berth in the Elite Eight this season, the farthest the team has ever made it in the NCAA D-III tournament.

In his Emory career, Davis finished second on the school’s all-time lists in scoring (1,870 points), scoring average (18.3 points per game), field goals (671) and free throws (409). Most importantly to Davis, however, is the fact that he is the winningest player in Emory history, finishing with an overall record of 78-27.

“Being able to say that you won more games than any player prior to you is really special,” Davis said. “Leaving that legacy behind means a lot to me. It reminds me that I helped build the program.”

Davis added, “If anybody asks if I was any good as a player in college, 10 or 15 years down the road, my response would not be whether I was the leading scorer or not, it would be that I am the winningest player in Emory history.”

This past season, Davis set school season records in total points (609 points), scoring average (22.6 ppg) and free throws (168), earning him a spot on the All-America second-team. In his four year career, Davis was named to the All-University Athletic Association (UAA) first team in three consecutive seasons.

From the moment Davis took the court his freshman year, he’s been a force, leading the team in scoring every year except his freshman season, as well as being one of the squad’s leaders.

“Having found earlier success in my first years on the team, I took on a role of being a voice that people listened to,” Davis said. “When I was a senior, I led the young guys in a way I felt was appropriate and in my own voice, different from seniors in the past.”

The squad has improved every season of Davis’s career, going from missing the tournament his first two years to winning the league championship his junior year, then earning a trip to the Elite Eight his senior year. Davis attributes the progress to the team’s intangibles, which have gotten better each year.

“The talent, the work ethic and the commitment has picked up each year,” Davis said. “The kids that have come in since I’ve been here have been a little more dedicated.”

Davis also credited the coaching staff for the program’s advancement, saying, “I think [Head] Coach [Jason] Zimmerman and his staff have done a great job bringing in kids who are good players that maybe could play at a higher level but want the education and the basketball.”

Davis had two favorite seasons in his Emory career, his freshman and senior seasons.

“Freshman year was so fun because it was so new,” Davis said. “As a freshman, no one expects much from you, and I found success early, so it was fun trying to further myself and the team.”

Davis described his senior season as special, mostly due to the fact that the team advanced farther than any in program history.

Davis was undoubtedly the most valuable player of the historic season, leading the team in scoring and in rebounding.

This past season, in one of the more exciting moments in Emory basketball history, Davis made both the game-tying three in regulation and the game-winning three in overtime to upset the No. 1 team in the country, University of Wisconsin – Stevens Point, to advance the squad to the Elite Eight.

When asked about the two clutch shots, Davis was most proud of what they meant for the program.

“I don’t think it meant as much to me personally as a player as it did to Emory as a basketball program,” Davis said. “Playing the number one team in the country in front of 3000 people in the biggest Division III environment there is and being able to walk out of there as the winning team in the game was really sweet.”

Davis was proud to disprove the non-believers who ignored the Eagles throughout his career.

“Throughout the course of my four years, we’ve been written off and looked over,” Davis said. “I just love the thought of Emory moving on and everyone who looks at that the bracket saying, ‘Oh wow, they’re for real.'”

Davis assessed his career to be a B+ to A, in academic terms, saying that he accomplished 85 to 90 percent of his goals he set forth for himself.

“Overall, it was a lot of fun,” Davis said. I’m not disappointed by how it ended in the full scheme of things.”

Following graduation in May with a degree in film studies, what’s next for Davis?