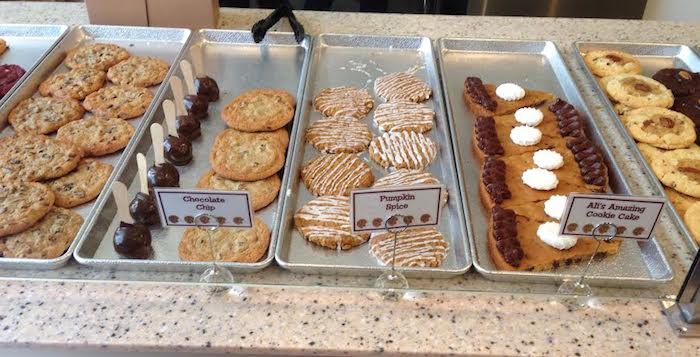 Store owner Jeff Rosengarten, who named the shop after his wife Ali, purchased what is now Ali’s Cookies seven years ago and has since opened two additional stores, the newest of which is at Emory Village.

The store was originally founded 35 years ago by the wife of an airline pilot who tried to keep herself busy while her husband was away on travel, according to Jeff.

Over the years, ownership of the business changed hands five times. It was always owned by a mother who just never wanted to build out the business, Ali said.

Seven years ago, when Jeff was facing unemployment, he sought a way to break back into business and found the opportunity to purchase what was then called “Chocolate Chips,” located in East Cobb.

He went by himself to taste the cookies at the store and was shocked by the delicious flavors, he said. He brought a dozen home to his wife to taste and explained that he planned on purchasing the store.

Although initially hesitant to go through with the purchase, they were assured by the landlord that the location offered strong business opportunities after directing Jeff and Ali to the breakfast restaurant Rise-N-Dine.

“It was not so much the crowd, as much as who the crowd was,” Jeff said. “It was Emory students, it was local people, it was just everybody and anybody. People that walked, people that drove, young and old. We were like ‘This was phenomenal!’ And here we are six months later.”

After rebranding the store to Ali’s Cookies and altering the recipes, the Rosengarten’s “perfected the cookie,” Jeff said.

“What differentiates us from others is all of our cookies are baked from scratch and are baked fresh daily, no preservatives, no chemicals, none of that,” Jeff said. “We also have more than 30 cookies to choose from.”

Ali’s Cookies is currently looking into whether they can deliver cookies near Emory’s campus late at night.

“We will probably partner with somebody locally to take care of our deliveries for us that has the logistics in place,” Jeff said.

Ali said that it could happen soon or in a few months.

“If there is demand for specific service from Emory, we will accommodate it,” Jeff said.

Ali joked that when she and her husband were attending this year’s freshman orientation to deliver cookie cakes, many students asked whether Ali’s Cookies will deliver late night.

Many students have responded positively to the idea of a new place to get dessert at Emory.

College sophomore Brittany Nguyen said she is excited about the new cookie shop.

“I thought Ali’s Cookies was gonna be the best thing to happen since Chipotle and Rise-N-Dine came to Emory Village, but it didn’t live up to my expectations,” Goharioon said. “I’ll stick to my Nestle Toll House break-and-bake.”

College junior Andy Kim said that although the restaurant may have some hiccups at first, he said it’s going to be great to have another dessert place near campus.

“We already have that Yogurt place [Yogli Mogli] but I think Ali’s is going to be a big deal at Emory,” Kim said.