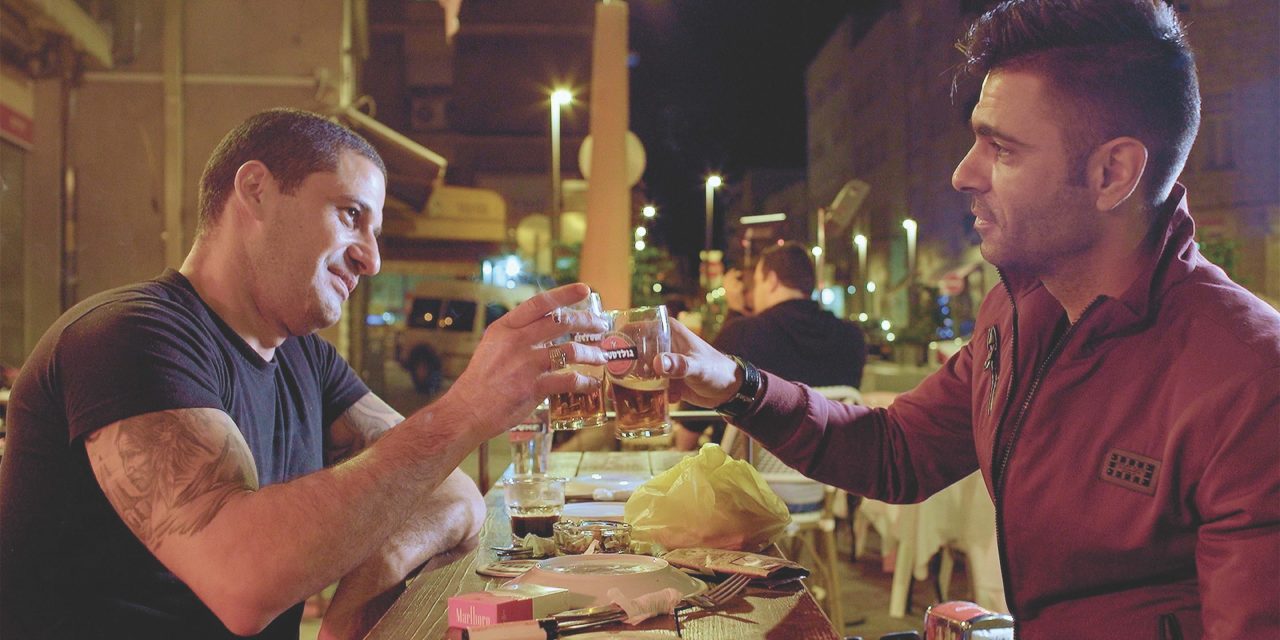 Anthony Bourdain famously said, “Food may not be the answer to world peace, but it’s a start.”

Underscoring food’s ability to defy barriers of culture, location, identity and politics, “Breaking Bread,” which begins with Bourdain’s quote, offers hopeful talking points. Producer Beth Elise Hawk’s directorial debut, which premiered at the Atlanta Jewish Film Festival on Feb. 18, is a visually captivating and optimistic documentary that celebrates the power of food to connect people. “Breaking Bread” uses food as a lens with which to analyze two groups historically at odds with one another: Israelis and Palestinians.

The film begins with a slow motion close-up of creamy hummus being pounded into a shallow bowl. This shot, when paired with narration about Nof Atamna-Ishmaeel’s “MasterChef” Israel victory as the first Arab Muslim, foreshadowed the rest of the film’s focus — food, and its ability to unite the sharpest of divisions.

The documentary surrounds the three-day A-Sham Arabic food festival, created by Atamna-Ismaeel following her Israel’s “MasterChef” win. Atamna-Ismaeel states that her Arab-Israeli identity is a gift because it allows her to embrace and benefit from the unique characteristics of both Israel and Palestine, just like food can benefit from more than one taste or ingredient. 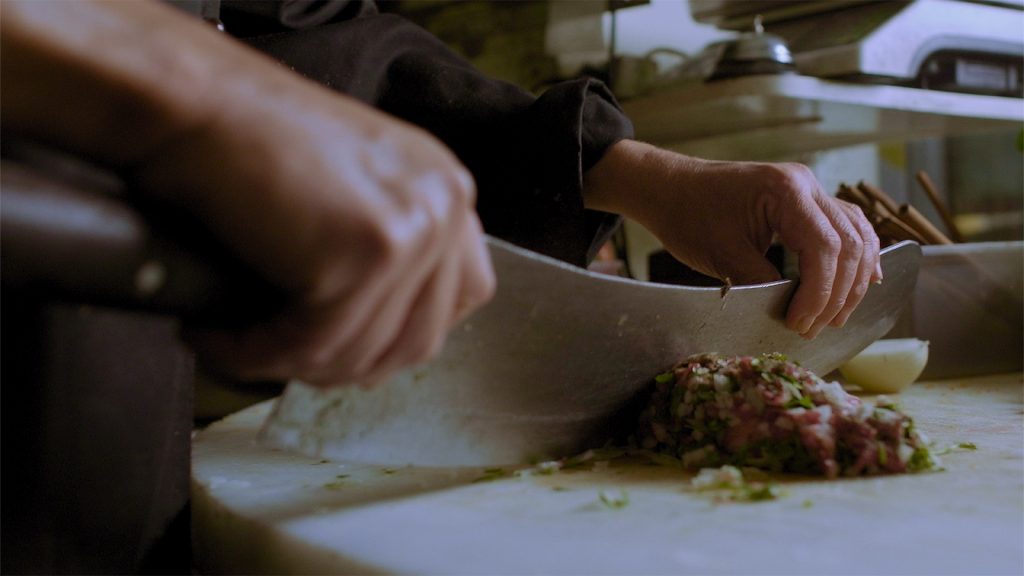 The preparation of a Tabbouleh salad in ‘Breaking Bread.’ (Atlanta Jewish Film Festival)

Based on this guiding principle, Atamna-Ismaeel founded the annual A-Sham Festival, which encourages over 70 Arab and Israeli chefs to leave politics at the door, gather in 35 Haifa restaurants and cook and share food together in  peaceful bliss. In these spaces, the chefs find common ground, enjoy each other’s company, cook food together and learn about each other’s lives. A-Sham is the Arab name for the area of Levant, which encompasses Syria, Lebanon, Jordan, Israel, Palestine and Turkey; it also highlights the Levantine cuisine these diverse nations share. The chefs featured at A-Sham hailed from varying cultural backgrounds and each of them spoke briefly about their identity and, most importantly, their belief in the power of food as a first step toward peace: not as the solution, but the catalyst to form basic understanding.

The film centers around four pairs of chefs who have differing identities and are partnered to create a dish for the festival. Viewers gradually learn the backgrounds of each featured chef, gaining insight into their culinary experience and identity through personable, casual interviews with them, their families and coworkers. After a peek into their personal lives, the film follows each chef pair as they create their dishes. As the camera accompanies the chefs through markets, restaurant kitchens, dinner tables and bars, viewers become privy to the chefs’ intimate bonds that cross borders to create the ultimate art of food.

One of the best shots of the film is of the first pair of chefs, Shlomi and Ali as they sit across the table from each other and discuss their passions for cooking, cheers-ing in a purely human moment of connection. 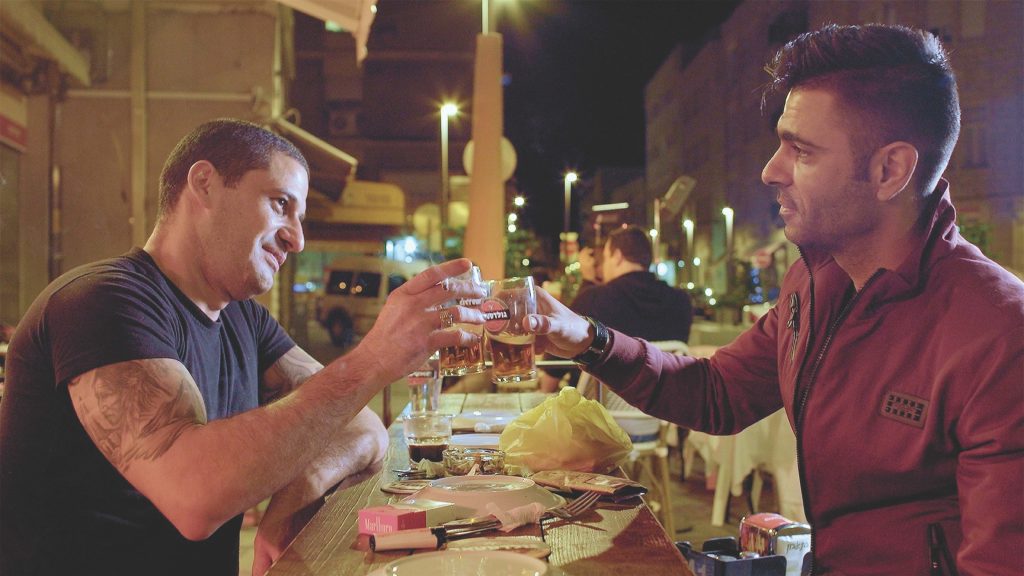 “Breaking Bread” allows viewers to experience developing friendships, intimate culinary partnerships and food itself. With the cinematic mastery of a “Chef’s Table” episode, this documentary captures the process of cooking both unknown and iconic Middle Eastern dishes, from Kishk to Tabbouleh salad, all of which are artfully seasoned and plated. Most sequences are shot in slow motion and accompanied by a stirring classical score, which makes viewers feel as though they are watching a masterpiece being formed in front of their eyes. The aforementioned opening shot of hummus, prepared by Chefs Shoshi and Fadi, even inspires Atamna-Ismaeel to state that hummus itself “has no borders.” Abounding shots of hummus and other Middle Eastern delicacies made me deeply regret watching the film on an empty stomach.

Atamna-Ismaeel states that the 10% of people in Israel and Palestine who do not want peace are the ones who make the headlines, but the 90% who do want to practice peace are not what is shown to the world. Though this statement may lack nuance, it is the film’s important guiding narrative. Peace between Israel and Palestine is a complicated goal, one that some regard as a pipe dream; but the two share a critical commonality in their food that, if wielded effectively, can begin to mend tensions. Both Atamna-Ismaeel and Hawk attempt to challenge the one-dimensional narrative of the conflict and highlight a possible avenue of peace-making. In relaying an unlikely tale of hope and teamwork between historically adversarial groups, “Breaking Bread” offers a perspective often unrepresented in mainstream media.

In a quote similar to that of Bourdain’s, Chef Hawa Hassan beautifully expresses the important lesson on food and connection this film exhibits: “Build longer tables and shorter fences.”