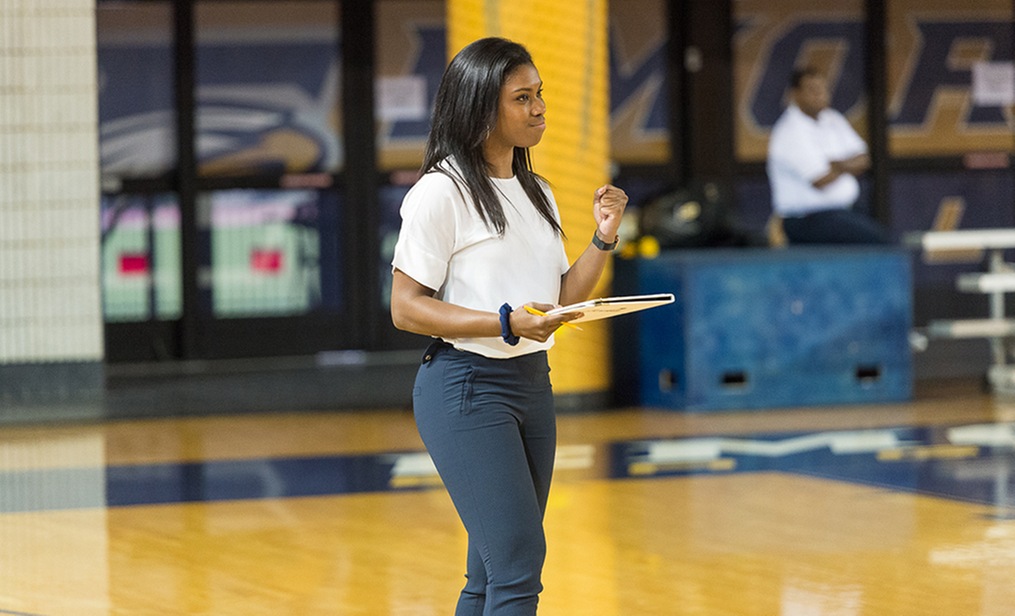 When a 13-year-old Brianna Jones first stepped foot onto Emory’s campus for a summer volleyball camp, head coach Jenny McDowell sensed there was something special about her. Jones, an Atlanta native, never did suit up for the Eagles, but after she was a volunteer assistant during her senior year for the Emory volleyball team, McDowell was determined to have her on staff. When an assistant volleyball coach position opened in 2017, McDowell knew exactly who she wanted for the job.

Within the last four years, Jones has been an integral part of the volleyball program, aiding the Eagles to two NCAA Division III championship appearances, two University Athletic Association titles and a glorious NCAA championship win in 2018. While her career at Emory has been nothing short of remarkable, Jones is ready to begin the next chapter of her coaching career. On Jan. 19, Emory Athletics announced Jones’ resignation to become the head coach of the Stevens Institute of Technology (N.J.) volleyball team.

While Jones has enjoyed her time in Atlanta, she said she was eager to begin a new chapter in her coaching career. Jones always aspired to move to another big city, McDowell recalled.

“I’m excited to move up northeast,” Jones said. “Atlanta is great, but it’s time to go. I’m excited for a new adventure. You have your chapters of life, and I feel like this is a big one for me.”

Jones will undoubtedly be missed by her players and fellow coaches, but her mark on Emory’s volleyball program will not be forgotten. McDowell noted how Jones’ detail-oriented mindset has helped lead the Eagles throughout her time in the program.

“She is one of the best technical coaches of the game that I’ve ever been around,” McDowell said. “She is way beyond her years in how she sees the game of volleyball, and that’s truly a gift. She’s a learner of the game and loves to teach the game.”

Her coaching, though, is driven by the individuals with whom she works. Jones’ fondest memory of her time with the volleyball team is their national title victory in 2018, but not for the reasons people may think.

“In terms of winning a national championship, trust me, that is something I’ll never forget in my life,” Jones said. “But watching the players and watching all their hard work, their labor come to fruition later on down the road — I have never looked upon a group of people and been so happy for them before in my life.”

The feelings are mutual between Jones and her players. Jones met with junior outside hitter Tara Martin every week during Martin’s first year of college to aid her transition into college life and collegiate athletics.

“Anything really that was on my mind, [Jones] always wanted to talk to me about it and make sure that I was okay,” Martin said. “She was always able to instill confidence in myself.”

Since meeting Jones during her own recruitment her junior year of high school, Martin has appreciated getting to know the multiple sides to Jones, she said. While her former coach could be as detailed as pinky placement on a block, Jones also knew how to make Martin laugh.

“[Jones is] just a total goof,” Martin said. “You kind of never know what Bri you’re going to get when you show up to practice. She can be super, super intense sometimes, but she can also just be completely messing with you. Going into practice and seeing her is definitely something we’re all gonna miss.”

Jones will become the sixth head coach of the Stevens volleyball program. As a Stevens Duck, Jones hopes to cultivate a new culture and is excited to work with a new group of women who are intelligent, driven and determined.

McDowell is excited for Jones to develop Stevens’ program. While she will miss Jones’ friendship and presence, McDowell knows the future is bright for her former camp attendee.

“[Stevens] is a very good volleyball program, and they have a history of success there,” McDowell said. “I expect her to lead Stevens to one of the top programs in the country, no doubt about it.”

While Jones is ecstatic about the opportunity up north, she will miss her home in Atlanta, where she grew up. But what she will miss most are the friendships she made along the way.

“This home — I love it here,” Jones said. “These are lifelong friendships and people I’ll never forget, people I’ll always speak to.”