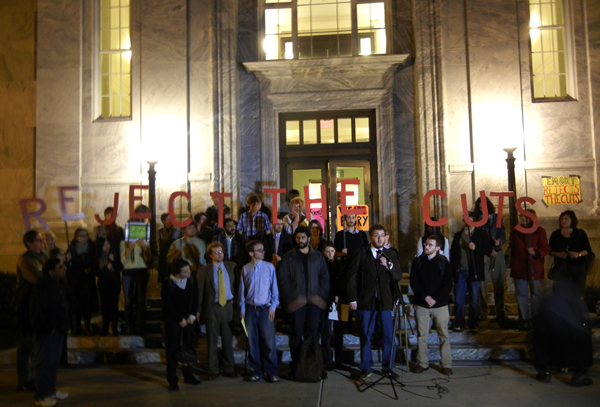 The #EmoryCuts movement held a rally Friday evening outside Candler Library, where a student-faculty delegation met with University administrators to discuss the recent department changes. A group of seven students and three faculty members met with University President James W. Wagner, Dean of the College Robin Forman and Vice President and Deputy to the President Gary Hauk in Forman’s conference room.

Following the one-hour meeting, the protesters announced on the steps of Candler Library that they were unsuccessful in convincing administrators to reconsider the department changes. Forman first announced the changes in a University-wide Sept. 14 email.

The meeting was the result of a six-hour sit-in that took place on the fourth floor of the Administration Building Tuesday afternoon. Near the end of the sit-in, Wagner and Forman had agreed to meet with 10 individuals at a later date. Earlier that day, the protestors had held a rally on the Quadrangle.

Before the private meeting, a group of more than 30 protesters congregated on the north end of Emory’s Quadrangle Friday afternoon. The group cheered on the chosen delegation as it walked up to Forman’s conference room in the administration office of Candler Library.

At 5 p.m. Hauk and a security officer greeted the delegation at the door of the administration office in Candler Library. The group asked whether media could attend the meeting and whether they could record the meeting. Hauk denied both requests.

According to the protesters who attended the meeting, security officers stood outside of the room during the discussion. The meeting lasted for one hour and ten minutes, concluding at 6:10 p.m. At that time, the delegation exited the building to speak to the crowd waiting outside.

“I am extremely disappointed to report that negotiations were highly acrimonious with no movement forward on any substantive issues,” said Pat Blanchfield a sixth-year graduate student in comparative literature. “In fact, President Wagner and Dean Forman have not only refused to meet with us in the future but have refused to consider any possible circumstance under which such a meeting would be necessary or productive.”

In interviews with the Wheel, members of the delegation said they believe administrators claim the group is dissenting because they are misinformed about the process and content of the plan.

“University administration has had ample opportunities to clarify and explicate their position and what they read as discontent on campus they think of it as misinformation,” Gill said. “What we tried to do is show that we are actually very well informed.”

Earlier in the day, the Administration Building was locked down in response to the scheduled meeting. Exits of the building were guarded by police. As of 8 p.m. officers still manned the exits.

Look for a full story to be posted soon.