No matter what mistakes were made by the administration, they were right to take such a strict stance against Beta. After all, it was placed under investigations for allegedly drugging a student. Such serious allegations demonstrate a clear and present danger not just to Greek students, but also to anyone who would attend a party on Eagle Row.

Emory was right to conduct a serious and intense investigation because the administration is responsible for our safety. The University was not working to target Beta or Greek life. Rather, it was seeking to protect its students. The administration was actively looking for what they could fix in order to prevent something like this from ever becoming a reality.

Many forget that this is not the first time that Beta has been investigated for potential wrongdoing. In 2013, a female student reported that she had been raped in the Beta house. The fact that another student was reportedly harmed in the span of only four years shows that Emory failed to reform Beta and Greek life to make it safer for others.

The existence of such allegations makes it clear that Emory was not seeking to target or persecute Greek life or Beta. If that were so, there would be more documented instances of Emory unfairly punishing fraternities and sororities. Tell me, did the Emory administration bungle the investigation into Sigma Nu’s hazing and reported sexual assaults? How was Phi Delta Theta “persecuted” by the administration?

No, the existence of multiple allegations against a particular fraternity instead demonstrates that Beta is incapable of reform and of making itself safer for its fellow students on its own. This further demonstrates the petulance and arrogance displayed by “Emory’s War on Greek Life,” which complained that Beta had no chance to defend itself against the administration’s actions. Whether or not Beta did something wrong, they ought to have acknowledged a need for reform and a willingness to assist the administration in furthering campus safety. Furthermore, it’s not as if a temporary alcohol ban and an in-house advisor were severe, intolerable punishments. Rather, those restrictions should have been welcomed as means of regulating behavior until the fraternity or Emory found a way to make the partying experience safe for everyone.

Such consequences are not the results of persecutions. Cock Foster’s article is merely the whinings of an entitled fraternity student who forgets that people have reportedly been hurt and instead chooses to moan about minor inconveniences.

To complain about unfairness or a lack of justice in lieu of severe punishment after a string of reported misconducts implies a desire for lenience. In fact, it calls into question what the author meant when he wrote that “Emory must take drastic and immediate steps to earn that trust back.” Would such steps include the reinstatement of former Beta members or a more lenient punishment? If so, that would be most ill-advised. Any lenience would continue to feed such insidious actions at Emory. It would also send a message that Emory is willing to tolerate such atrocities in Greek life. That shows that Greek life is unwilling to welcome regulation or reform, thus allowing the potential for more victims.

To clarify, the Greek life community has not wronged me and I do not believe it is inherently evil or bigoted. There are plenty of moral and upstanding members, such as those who supported Emory’s Interfraternity Council’s (IFC) 2014 self-imposed suspension of social activities to act against hazing and sexual assault. Rather than citing specific members of the community, Cock Foster instead chose to cite a former Beta president, a single response to a feedback form and a secret society, Ducemus. Maybe those three quotes alone can do an adequate job of representing every single Greek life member’s opinion. But do they really?

Beta claims to be “developing men of principle for a principled life.” I fail to see the virtue or “principle” behind ambiguous accusations against the administration and a disregard for the fraternity’s failure to protect those people. Although the new incarnation of Beta will not include any of its previous members, time will only tell whether they choose to embrace student safety or whether they instead walk the immoral and nebulous path of their predecessors. Either way, the disregard of previous members certainly calls into question whether or not Beta ever deserves a chance to be one of the Greek organizations that represents Emory University.

Daniel Park is a College sophomore from Ridgewood, NJ. 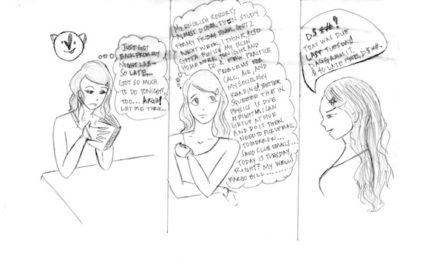 Our Opinion: Homecoming an Overall Success