Addressing Racism Against the Trayvon Generation on Campus

I am a member of what New Yorker columnist Elizabeth Alexander described as the “Trayvon Generation.” Growing up, I have constantly been exposed to the deaths of those who look like me at the hands of the police and our fellow citizens. I remember being shocked by the murder of Trayvon Martin in 2012. I was 15 at the time. I reflected on the fact that he was only two years older than me and his future was completely stolen. Each year, more names have been added to the list of those slain at the hands of institutions never meant to protect us and people who view us as only threats. It’s been eight years since Martin was killed, but we’re still in the same place in some ways.

I am no longer shocked, but I still lament the murders of Ahmaud Arbery, Breonna Taylor and so many others. I’m 22 now and I still reflect on the fact that they were only three years older than me and their futures also completely stolen. Alexander shows how this can be traumatizing, and for Black students, the culture at predominantly white institutions (PWIs) and hegemonically white institutions can magnify that trauma given a lack of awareness and deliberate racism. Thus, being a Black student at a PWI, like Emory, often entails facing anti-Black racism in society and on campus.

On PWI campuses, those of us in the Trayvon Generation face individual racism; overt and covert, intentional and unintentional, conscious and unconscious. Racism that manifests as a result of a lack of awareness is often covert, unintentional and unconscious. It’s what some would call benevolent racism and often involves microaggressions. Some examples of this include assuming that Black students are service workers or trespassers, confusing the names of the few Black students in class and unknowingly attributing stereotypes to Black students. Some of these are present in the experiences chronicled on the Black at Emory Instagram page. In “Citizen: An American Lyric,” author Claudia Rankine outlines many examples of microaggressions and speaks to the trauma they can cause, especially as they accrue over time. Some white students may not have known many Black people while growing up or did not have to face the reality of racism in the U.S., but we’ve reached a point at which pleading ignorance has become unacceptable; discussions of racism are ubiquitous in the media and information is readily available online.

In addition to such subtle racism, Black students within the Trayvon Generation also face overt, intentional and conscious racism with harmful, sometimes deadly, consequences. This sort of racism often looks like using or petitioning to use the N-word, using Blackness as a costume or speaking disparagingly about Black students. This racism is easy to spot, yet it often goes unnoticed and unaddressed by other students or even the University itself, as highlighted by the Black at Emory page. Using the N-word, in particular, seems to be a common occurrence featured on the Black at Emory page. The N-word’s history in the U.S. is complicated, but whether one knows it or not, if a Black student asks a white student or a non-Black student of color not to use it, the student must listen. Most recently, the investigation of the Arbery shooting revealed that he was called an “f—ing n—er” by one of the men charged for his murder, Travis McMichael. Given this historical and contemporary context, consider the impact on a Black student hearing this word spoken intentionally and consciously by a white student or a non-Black student of color, on campus. While students should care enough about their peers to listen to them, the implications of using the N-word should also deter its use in the first place.

Many of us in the Trayvon Generation have suffered America’s racism for most of our lives, and we shouldn’t have to continue that fight on our college and university campuses. It is time for white students and non-Black students of color alike to address their complicity in anti-Black campus racism of all kinds and the ways in which they’ve traumatized their peers in the Trayvon Generation. They must work toward not only being allies but also co-conspirators. 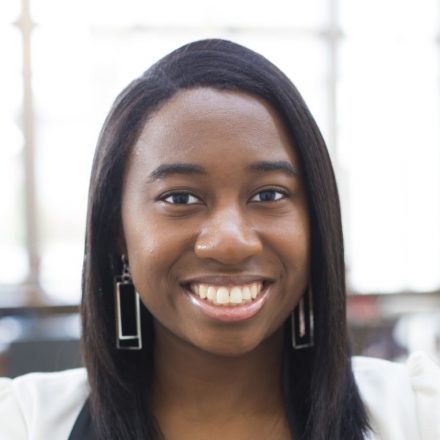 Deirdre “Jonese” Austin (22T) is from Charlotte, North Carolina, and is a Master of Divinity student pursuing certificates in Black church studies and baptist studies. She is also a 2019 graduate of Georgetown University, where she majored in culture and politics, minored in African American studies and completed a certificate in religion, ethics and world affairs. Her research interests include the Black church and the intersections of religion, race, politics and social justice. You can learn more about her and read more of her writing at DeirdreJoneseAustin.com.