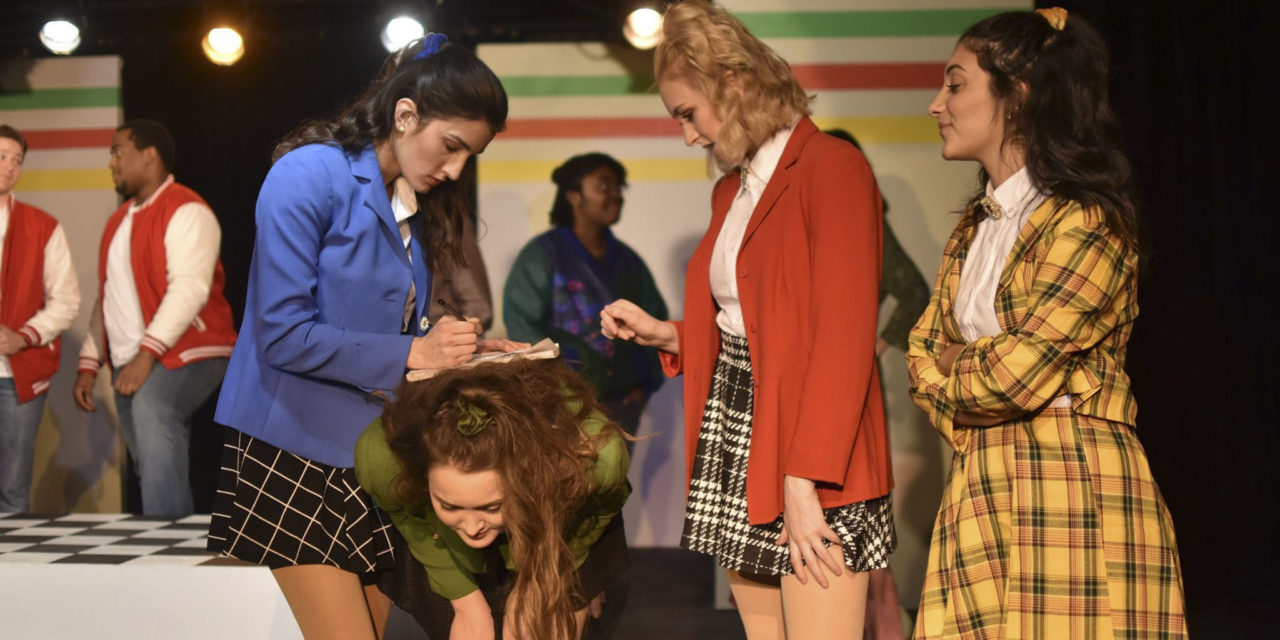 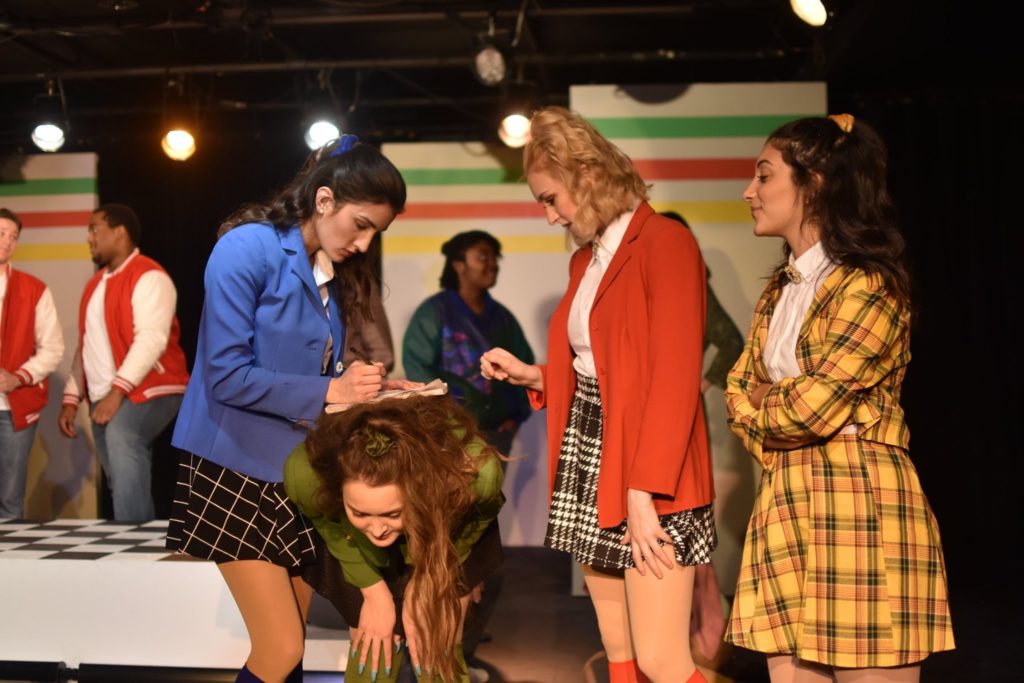 What’s better than watching a musical that colorfully comments on the inherently messed up institution of public education in a way that’ll have you gripping your stomach in laughter? Ad Hoc’s spring production of “Heathers: The Musical” does just that with added benefits of well-choreographed musical numbers and witty character rapport. Unfortunately, after the initial introduction of characters, who rarely deviate from the high school tropes they represent, the show’s charming facade wears off to reveal the harsh insensitivity that plagues the original script. While I enjoyed the top-notch and incredibly produced performance, I found it intermittently difficult to laugh alongside other audience members.

“Heathers” takes place in 1989 and follows Veronica Sawyer (Isabella Dodd (20B)) as she struggles through her senior year at Westerburg High, a fictional school in Sherwood, Ohio. Unlike most seniors, Veronica’s social standing undergoes an upheaval that puts her in the company of popular girls Heather Chandler (Cara Clements (22C)), Heather Duke (Kylie Measimer (23C)) and Heather McNamara (Serena El-Khatib (21C)), collectively referred to as the Heathers. The ensuing petty drama unfolds into a string of fiery confrontations and, ultimately, several murders.

The show, which will be performed in the black box theater of the Emory Burlington Road Building through Feb. 22, utilizes its small area to its fullest potential, filling the room during group numbers and sometimes getting face-to-face with audience members. The set is broken up by a series of blinders decorated in the distinct red, yellow and green of the Heathers’ iconic outfits. A raised platform sits center stage and provides a space for the cast  to set themselves higher than their fellow actors. Despite its small size, the stage is brought to life by the student performers throughout the entire show.

This cast’s precise execution of dialogue and lyrics resonated with the audience, who responded with raucous laughter. During the Heathers’ showstopper “Candy Store,” a large part of the ensemble flanks an animated performance by the show’s dynamic trio. During this song, the Heathers show their vocal prowess while performing nonstop full-body choreography. In the middle of it all, Heather Duke’s riffs soar over the strong vocal foundation established by the group. Chris Lowery’s (20C) performance as Jason “J.D.” Dean pulls the audience in to deliver the most effective commentary of the show; his tangents regarding the impersonal nature of public education in the song “Freeze Your Brain” especially encapsulates this reflective tone. While “Heathers” is clearly a comedy, its most powerful moments are when it stops and reflects on the heinous actions of the show’s characters, as J.D. does frequently throughout the show.

Alongside the stars of the show, nearly every member of the cast had a solo moment to shine. Playing various parents in the show, Matthew Nails (22C) and Noah Gentry (23C) display infectious energy during their song “My Dead Gay Son.” Numbers that featured more of the cast, too, were incredibly moving and powerful as the actors’ voices filled every nook and cranny of the small theater. The full-ensemble scenes showcase the cast’s abundant talent, with each room-filling number resembling a cardio workout accompanied by resonant melodies.

“Heathers” is clearly a satirical comedy that brings issues prevalent in the high school experience into the limelight, and then some. It’s important that these issues are represented in art, and while comedy can be an effective way at confronting them, the original “Heathers” script does so poorly, if at all. The closest the show gets to having a productive dialogue is in the song “You’re Welcome.” As Veronica navigates the threat of being assaulted by the campus jocks, her assaulters explain why their actions are justified with lyrics such as “you can’t just leave, not when you’re dressed like that.” While the show has the potential to start a dialogue about these issues and inspire empathy among peers who experience mental health struggles, “Heathers” does more to mock due to the crassness written into the script.

“Heathers” combines jaunty melodies with a somber message of the established high school norm, and, because of the wit and charm of the cast, Ad Hoc’s production was largely effective at cultivating a positive atmosphere. However, I do not believe the show is an effective way to have discussions about many of the more sensitive topics explored within the play. “Heathers” is an impressively produced and performed musical, and excellently showcased the talents of the student actors while delivering stunning, off-color messaging.