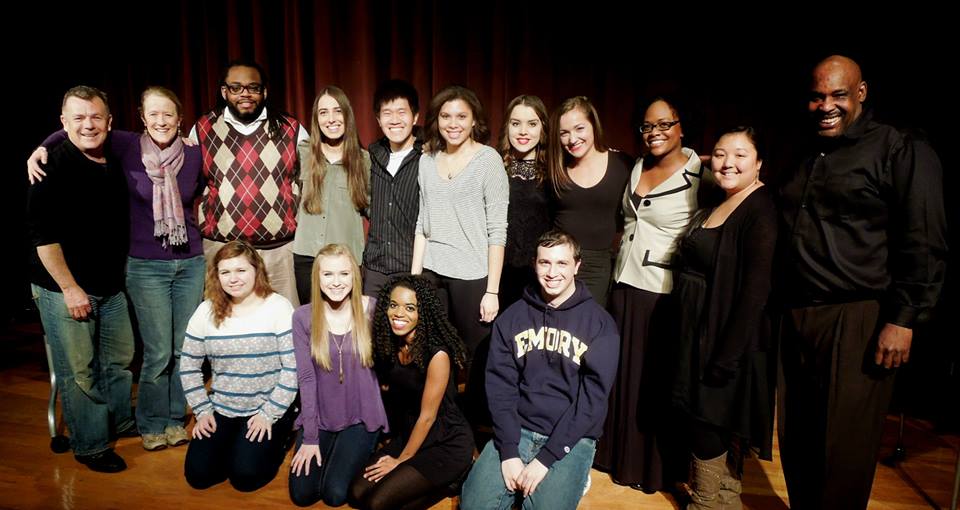 There’s a bag of crispy Doritos eyeing you from the nearby table. You haven’t eaten all day, and you’ve barely eaten for the past two weeks, as you try to reach that tabloid-worthy flat stomach that you want for spring break.

Still, the food looks so tempting. What do you do?

The answer is quite difficult for Katie, the protagonist of “What’s Eating Katie?,” a musical written by psychologist Dina Zeckhausen and directed by Ken Hornbeck, director of Issues Troupe, a program of the Office of Multicultural Programs and Services.

Both individuals worked with Active Minds, a student organization working to eradicate the stigma associated with mental disorders, to arrange and perform this production for its third year on Monday, Feb. 23 and Tuesday Feb. 24 at Harland Cinema.

The piece centers around Katie, a young college freshman who battles her personal insecurities that have embodied themselves in the form of a menacing eating disorder. Everywhere she goes, the eating disorder, personified as Ed, follows. In this play, Ed represents anorexia.

Hornbeck revealed how he got this group of students together in the first place.

“We only have a week to get the show together, so most of the cast [from the same production last year] returned,” Hornbeck said.

The playwright and lyricist Zeckhausen attended the performance to see her work in action. Ideas highlighting the prevalence of eating disorders were illustrated in her play, and she addressed a number of perspectives surrounding the issue, particularly the stigma associated with eating disorders.

“I learned about the freshman 15 in college,” Zeckhausen recalled. “You have unlimited food, drinking, partying — it’s natural to gain some weight, but that’s not the important part. It’s about listening to your body, stress reduction, managing yourself.”

Zeckhausen further elaborated on how the dynamic of the play might have changed with a male protagonist or a different eating disorder, but she claims that the essence of her play would still remain.

“There might be different pressures, but Ed [the eating disorder] is the same. There is still anxiety and depression, but the coping mechanisms are the same,” Zeckhausen explained.

She related anorexia to other eating disorders, such as binging.

“Binge eating disorder is much the same. It’s still compensating for under-eating or over-exercising.”

Many of the actors and actresses discussed how they dealt with diet changes when they came to college, outside of the play, as our peers who have experienced many of the same things.

They addressed the idea of the infamous “freshman 15” in greater detail because of its ubiquity.

“I gained five pounds! I’ve stopped growing taller! What are my parents going to say? Oh no!” College sophomore Tom Zhang, who embodied the pesky eating disorder, sarcastically remarked. “It’s actually not a big deal,” he added, in regards to the minor weight gain many experience.

“I’m a grad student, and I have a lot on my plate, and I eat a lot more, which is hard being a larger person. I go to class, then I go to work, then I go to a student organization. I burned myself out because I was consumed in school,” Jermaine Pearson,a graduate student at Emory’s Candler School of Theology who played the role of Katie’s dad, said.

Zeckhausen responded to the students’ concerns from a psychological point of view.

“There are different triggers for overeating,” Zeckhausen said. “It’s figuring out what is triggering you throughout the day. Is it a fight? Is it stress? Is it that time of day? [To determine this,] I refer people to a dietitian for a food plan. Exercise is also a great thing.”

The actors and actresses in the show also elaborated on how much the show has changed them, just by their participation in such a relevant production.

“Doing this show has made me a lot more aware about being aware of what I eat. When I’m stressed, I might not eat, and this show put things in perspective,” College freshman Charis Wiltshire, the actress who played Katie. said.

Others, such as Zhang, related different ways they dealt with stress.

“I got involved with Theater Emory really quickly, and I didn’t really deal with transition well. I put off my homework until 2 then worked until like 5,” Zhang further explained. He has gotten better at dealing with his stress since.

Reminiscing on her own college life, Zeckhausen agreed with the changes the actors presented.

“College is learning to deal with ups and downs, but as you get older, you realize that one test isn’t going to define your life,” Zeckhausen concluded.

The play showed that nobody or thing should define what you can or can’t do, as long as you take care of yourself.

Eat what you want, even if it is that bag of Doritos.