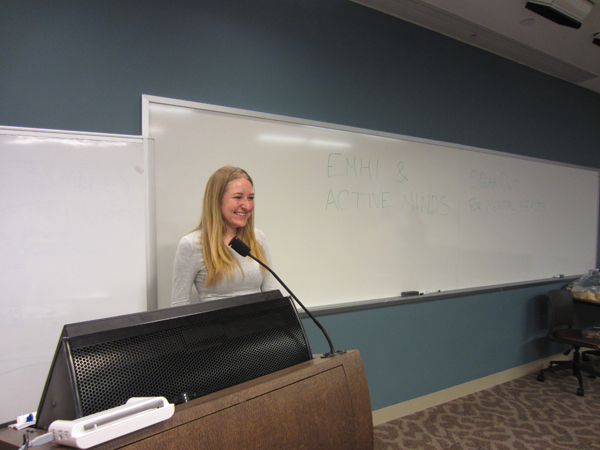 One in every four college students has a diagnosable mental illness.

College life is a huge change from everything students have previously experienced. The freedom and ensuing stress can adversely affect one’s mental health. However, mental illnesses are viewed as a taboo, and those suffering from them often feel the need to hide what they are going through.

Active Minds, a national organization founded in 2003, strives to change the conversation about and reduce the stigma around mental illness. With more than 400 chapters on college campuses across the country, it is the only organization which uses student voices to address the problem of mental illness.

“A lot of people don’t realize how many people do struggle with mental health issues,” College sophomore and President of Active Minds Sarah Spitz said. “It’s a lot more common than people think, but it’s not talked about.”

Mental illness is a topic few people feel comfortable talking about – and Spitz hopes to change that. Active Minds co-hosted a Speak Out for Mental Health on Thursday, April 25 with the Emory Mental Health Initiative (EMHI), a student organization mainly comprised of Rollins School of Public Health students. Speak Out for Mental Health featured an open mic where students came up and spoke about what they have struggled with or explained their story. Spitz explained that the main aim was for participants to feel open and supported.

“The goal really is to show people it’s okay to talk about it and reach out for help,” she said.

Though EMHI approached Active Minds to help run their event and reach out to the undergraduate population, Spitz mentioned her own personal drive to see this event through after reading the numerous posts on the Emory Secrets page describing depression, relationship struggles and suicidal thoughts. She also looks to dispel myths about mental illnesses by stressing that those with mental illnesses do not look or dress a specific way but are normal people that we see every day.

Active Minds also encourages stress reduction and overall wellness. This past year they have hosted events such as a stress-reduction yoga class around finals and jeopardy about eating disorders. As part of a national Active Minds event called Send Silence Packing, Emory’s chapter laid out 1,100 backpacks on the Quad to symbolize the number of students who commit suicide each year. The main aim of the events they hold, Spitz said, is to increase awareness in an engaging and fun way.

Through these and future events, Spitz hopes to make the Emory community more supportive and aware, thereby allowing those suffering with mental illnesses to feel comfortable sharing their troubles.

She feels that Active Minds is particularly effective because it comes from the students’ voice – the impact of hearing stories from people who are your age and just like you can be irreplaceable.

“Students sharing their stories seems to be the most powerful way to impact other people and get them to care about the message,” Spitz said.

Spitz hopes to expand both the membership and scope of Active Minds. This includes hosting more events and also reaching out to the student population to find out what they want.

Future events will further increase awareness about mental health. In particular, Spitz looks to create a student panel with four to five members who will share their stories relating to their own, their family members’ or their friends’ mental health. Spitz wants this panel to speak at multiple events and even psychology classes.

In addition, Spitz plans to have various speakers come to campus, such as mental health professionals who will discuss stigma and disorders or a survivor of mental illness. With these events, Spitz hopes to educate Emory’s population by embodying the goals of Active Minds.

“We all have the same goals. We all want to succeed here,” she said. “Mental health plays a key role in student success, academics, making friends – everything.”