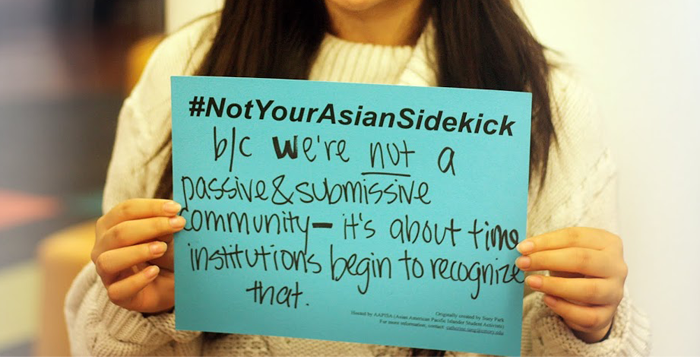 The Asian American Pacific Islander Student Activists (AAPISA), a group of 30 dedicated Emory students, decided in January 2014 to bring their efforts together in order to promote fair treatment of Asian Americans on campus.

The activist group, led by College freshman Cathy Tang, focuses on raising awareness about the micro-aggressions that happen so often against Asian Americans all over campus.

“The Asian American identity is very unique because you take two different cultures, two different identities, and try to reconcile them,” Tang said.

The term Asian American places together a wide variety of different nationalities; however, the group does not try to blur national lines, but rather tries to promote a sense of solidarity and of acceptance of cultural differences.

In order to give a voice to Asian Americans on campus, AAPISA launched the #NotYourAsianSidekick movement, an ongoing campaign that allows Asian Americans to fill out signs on which they express their thoughts about their identity and the way it is perceived by others. Pictures of the signs and their creators have reached a new level of exposure in the two weeks since the movement has been launched. In a short time, the #NotYourAsianSidekick idea brought more than 140 likes to its Facebook page, more than 1000 views for individual pictures as well as retweets and shares on both the social media outlets, this way reaching out to Asian Americans globally.

The idea came from Suey Park, an Asian American feminist advocate who first launched the #NotYourAsianSidekick in the context of her Twitter page. Park was interested in promoting better treatment for Asian American women. AAPISA contacted Park and consequently decided to bring the movement to Emory in a more accessible and open format by targeting all Asian Americans on campus, and not only Asian American women.

“We have given the Asian Americans on campus an opening to write about their experiences, and that has been cathartic, emotional and, I would also say, powerful,” Tang said. “Those two minutes in which they write the signs open up a space for them in which they feel they have the power to fight back, to resist the micro-aggression that is being pushed on them.”

What is next for AAPISA? On April 18, the group will have its own table at the Annual Culture Fest that will feature yet another hashtag: #BlackPowerLiberAsian, a movement also started by Park which aims to also engage the Black community.

Moreover, Tang looks forward to expanding the activities of the group to include a possible weekend event with invited speakers. She is also interested in building connections with other minority groups on campus.

“My goal is to build a platform where Asian Americans can have a voice, where they can talk about issues of racism as they have experienced them,” Tang said.