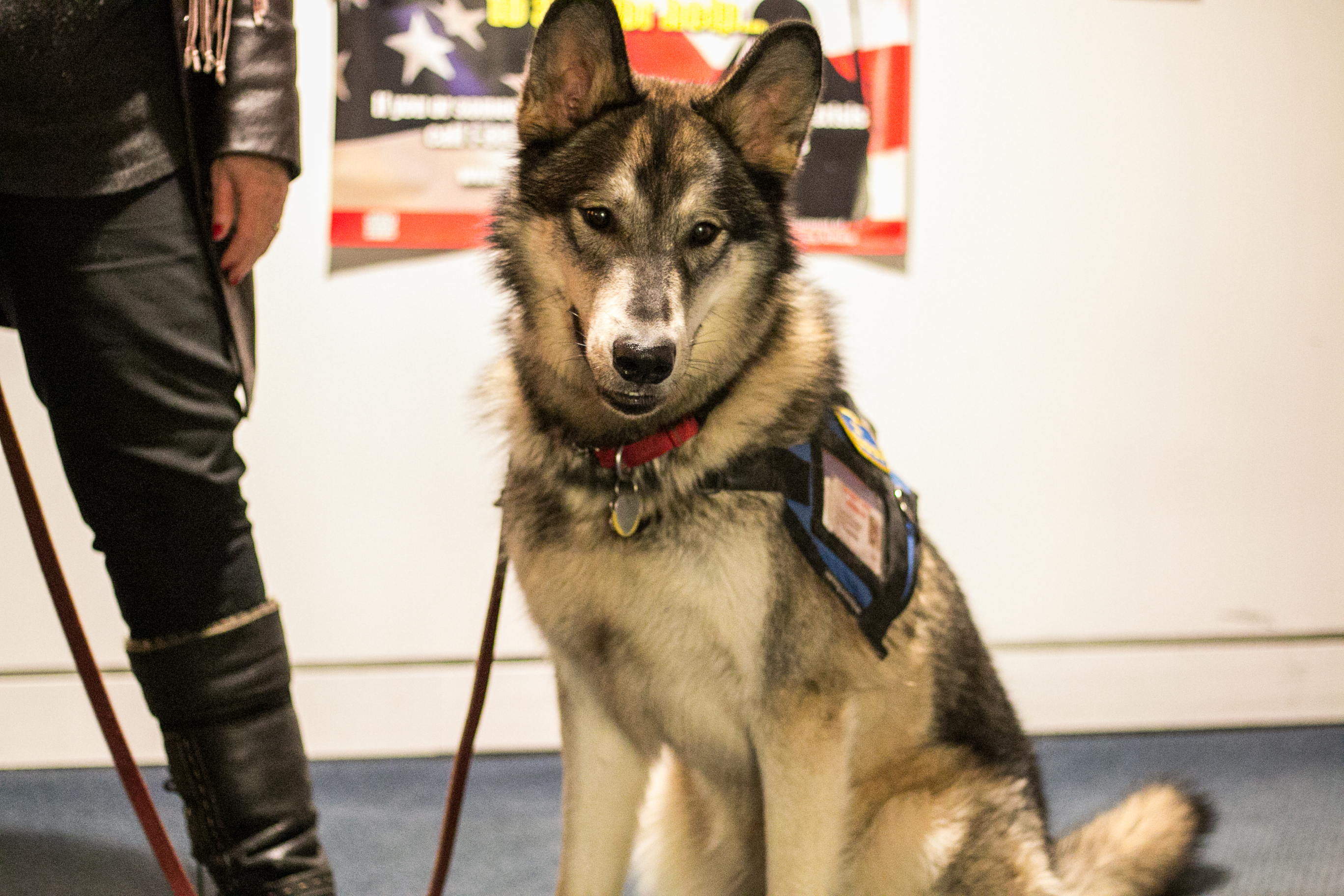 When Counseling and Psychological Services (CAPS) Interim Training Director Colleen Duffy brought 11-month-old Phineas the dog (affectionately nicknamed Finn) into the DUC-ling as part of his training, more than a dozen students crowded around to pet him.

Duffy greeted the students patiently. “This is Finn,” she said.

As the students bent to pet him, Duffy asked how they’d been.

“Stressed,” one said. “Tired,” another chimed in.

“Come to CAPS if you need anything,” Duffy told the students. “We’re always here.”

And after Duffy answered questions about Finn, she thanked the students for helping Finn — interacting with students brings him closer to therapy dog certification and helps him adjust to his role as CAPS’ “canine outreach specialist,” she later told the Wheel.

Finn forms only one half of CAPS’ Canine Support Staff. The other half of the canine staff is Beowulf, Finn’s older sister by two years and CAPS’ certified therapy dog. Both are Native American Indian dogs, a rare breed which Duffy calls “very intelligent [and] very curious.” While Finn attends various on-campus programs, Beowulf stays in Duffy’s office and practices animal-assisted therapy.

“I really believe in [the therapy dog] philosophy because I’ve seen … how it helps people,” Rodriguez said. “I’ve never been to [CAPS], but I feel like [the dogs are] a great resource for students that need therapy or need help.”

Dogs first came to CAPS in September 2015, when Duffy selected Beowulf to become CAPS’ therapy dog. Beowulf’s introverted and intuitive temperament, Duffy thought, would serve CAPS’ purpose well. Duffy’s intuition proved to be correct: Beowulf acts as a calming presence at CAPS, helping to soothe those who have experienced trauma or painful emotions.

But increased demand from clients and on-campus programs required Beowulf to learn separate skill sets for both therapy and outreach. Finn’s arrival allowed Beowulf to focus solely on animal-assisted therapy, an area where she excels. 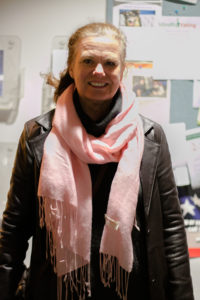 Duffy adopted Finn, who she describes as “a bright boy” with “an extroverted personality,” in April 2017 after congenital cataracts left him unable to become a service dog. Finn’s former trainer was reluctant to turn Finn over to inexperienced hands, but Duffy’s experience with Beowulf, another Native American Indian dog, made her a strong candidate for Finn’s adoption. Though Finn could no longer service individuals with disabilities, Duffy found his extraversion suitable for outreach efforts.

Duffy approached Finn’s visual impairment with determination. The impairment forces Finn to rely on his sense of touch to perceive his surroundings, and he often refuses to cross unfamiliar terrains. To familiarize him with the campus, Duffy walked him along stairs, grates and other surfaces.

“There are some areas [on campus] that are grated — they have holes in them. With his vision, he just knows that’s dangerous, that’s scary,” Duffy said. “I needed to practice with him to let him know that it was OK to walk across it.”

Finn made his first excursion as an outreach specialist October 2017, when Duffy brought him to the Respect Program’s Wonderful Wednesday table, where he greeted students.

Duffy thinks that Finn may also have neurological impairments, which likely render him unable to experience satiation. Bringing Finn into her office means she needs to clear the floor of small items and give him something to chew on. Usually, she opts for a tough bone.

“[Finn] eats everything, so you have to be really vigilant,” Duffy said. “He’s been to the emergency room six different times, and he’s had surgery already [when Beowulf’s toy became lodged in his small intestine].”

Before coming to Emory, Duffy worked in private practice as a trauma specialist. She saw that many of her recovering clients sought and found comfort in their pets, and her observations piqued her curiosity about the benefits of animal-assisted therapy.

“Many folks have been harmed interpersonally, so they trust animals because animals haven’t harmed them in any way,” Duffy said.

Similarly, student pet-owners attribute improved mental health to the unconditional love of their canine companions. Erika Gonzalez (17Ox, 19N), whose sister raises a support dog in her apartment, said that having a dog nearby has helped her cope with panic attacks.

“[Having dogs at CAPS] is a great thing because there are a lot of people who have … problems that can’t really be dealt with the same way as having a pet or a dog give you the affection,” Gonzalez said. “And I know having or feeling the love of an animal really helps reduce the amount of panic attacks I have.”

Duffy believes that the dogs’ presence has helped spread awareness about CAPS resources. Clients have come into CAPS specifically requesting Beowulf’s company, and Duffy said she has had difficulty meeting demand for the dogs — doing so would require her to forgo responsibility to her own clients.

“After meeting [Finn, bringing him onto CAPS] was a pretty easy decision. [Duffy] thought that that would be a good idea, and I really trust her opinion,” Collins said. “I think a lot of students have really felt more comfortable working in therapy with Beowulf present, and I think [she] has really done a great job of helping students feel more welcome at CAPS.”

Duffy said she hopes CAPS’ Canine Support Staff can prove the value of therapy dogs to other universities’ counseling centers.

“We’re very fortunate to have backing from the whole of Emory, and I think the whole of Emory has embraced Beowulf and Finn,” Duffy said. “I think in some ways we’re a harbinger of something that’s really viable.”

After Duffy brings Beowulf and Finn home each day, she removes their harnesses to signal that the day’s work has ended. Finn’s responsibilities will only grow as he adapts to his role as CAPS’ canine outreach specialist, but at home, work gives way to rest, and Finn is free to frolic with older sister Beowulf.