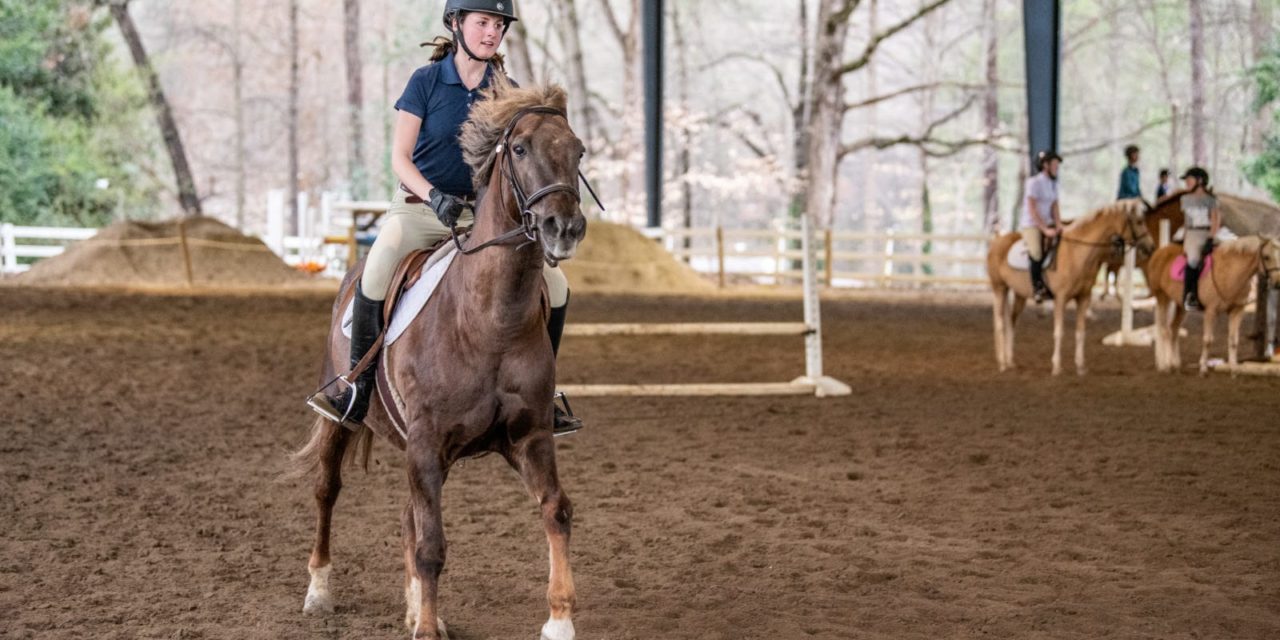 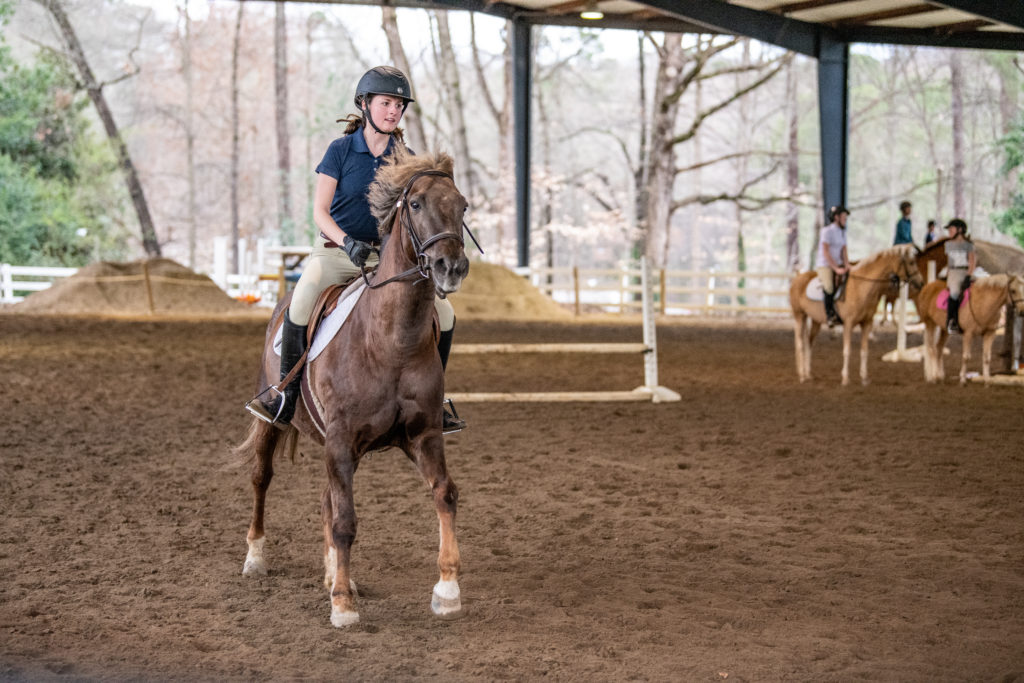 Amid a week of NCAA swimming triumphs, basketball championships and exceptional Emory sports spirit, one Emory team flew — or rather, rode — under the radar: the Emory Equestrian team.

Fresh off of regionals at Auburn University (Ala.), the team’s two qualifying members, senior President Jacqueline Lee and sophomore Sara Grace Carmical, spent this past weekend competing in flat courses. Though they didn’t ribbon, they said they “had a great time” participating in jumping and flat courses and demonstrating the basic walk, trot and canter movements.

For the 18 members of Emory Club Equestrian, grooming horses, cantering around a ring and jumping over fences have become second nature, but this regal sport has largely been overlooked in Emory’s athletic portfolio. According to junior rider Erin Oquindo, the long drives to training sessions in Atlanta can deter the Emory community from watching the club.

Once a week, team members, both longtime riders and novices, strap on their riding boots and make the roughly 45-minute journey from Emory to Chastain Horse Park, where they clean their horses, prepare the riding equipment and spend about an hour honing their riding techniques with Chastain’s Assistant Head Trainer Missy Stewart.

“The objective is to be as technically accurate as possible while still looking pretty,” junior Katelyn Boisvert said. These technicalities involve pace, body posture and arm positioning.

In equitation, however, judging can be infuriatingly subjective. While judges score out of 100 on form and rhythm, riders’ body types have historically played a significant role in scoring. According to Lee, judges have often favored “long, lean” bodies. This is a source of frustration for many riders, especially those whose body types do not fit into traditional standards.

While horse shows often last an entire day, each rider only performs in front of the judges for a few minutes.

“It’s like hours and hours of waiting, followed by minutes of sheer terror,” Oquindo said. But despite the nerve-wracking environment of horse shows, Oquindo, who is mildly allergic to horses, firmly believes, “you don’t choose this sport. It chooses you.”

Emory Equestrian is part of the Intercollegiate Horse Show Association (IHSA). IHSA requires riders to pull a horse’s name out of a hat during trainings and shows to make it fair for those who cannot afford to train with a personal horse. 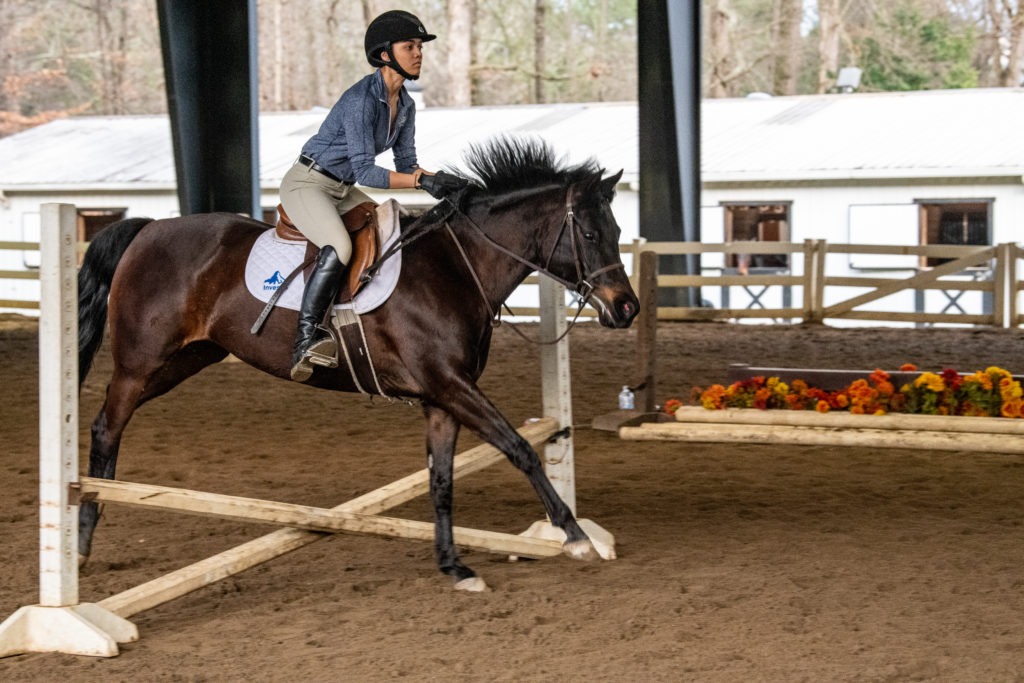 After the riders arrive at Chastain and find the horses they’ve been matched with for the day, they groom and place the saddle and other equipment, such as the bridle and girth, on the horse, a process known as “tacking up.” Riders spend approximately 20 minutes tacking up, ensuring that every piece of equipment is secured and comfortable. The most difficult part of the process involves putting a bit into the horse’s mouth, as horses often fuss around during this step.

“Each horse is a new challenge,” Oquindo said as she groomed Dakota, one of Chastain’s horses. “Dakota is spunky. She’s got a tiny stride but a whole lot of power. She’s like a Fiat.”

After their horses are ready, the riders then enter the ring, where they practice the walk, trot and canter — the three basic movements in equestrian — before advancing to jumps.

Although physical exercise outside of riding is not required, competitive horseback riding is anything but easy. Riders must pay attention not only to their own posture but also to the horse’s pace and footwork to lift their bodies up from the saddle at the correct times. Body positioning differs for each of the basic movements as riders control the horses by applying pressure to their bellies and holding the reins at specific lengths.

“Essentially, you want to look like you’re doing nothing,” Lee said.

On top of that, riders must be aware of everything happening around them to avoid any collisions while multiple riders train simultaneously. And because riders must control both their own bodies and their horse’s bodies, injuries are common.

Oquindo, who has been riding on-and-off for about a decade, expressed her frustrations in the horseback riding community, including a lack of diversity in middle and high school programs. Since joining Emory’s team earlier this year, however, she has experienced a newfound sense of belonging.

“This is the most amount of people of color I’ve ever ridden with in my life,” she said.

Although not all team members train at the same time, they have built a solid community through long, nerve-wracking competition weekends, which occur about eight times a year, and other activities at Chastain. In addition to weekly training sessions, members of Emory Equestrian must complete 10 hours of community service per year with Chastain’s therapeutic riding program. The program offers riding therapy, known as equine-assisted therapy, for children with disabilities. Equine-assisted therapy works to improve motor skills for coordination and balance.

At a university with several decorated Division III varsity teams, Emory Equestrian is a secret hiding in plain sight. The team has not only mastered the skills of horseback riding, but each rider has developed thick skin along the way. Even when judges present lackluster scores, team members try to remain positive.

“It’s not about the placing,” Lee said. “It’s about the ride you give.”