A Russian Perspective On Crimean Crisis 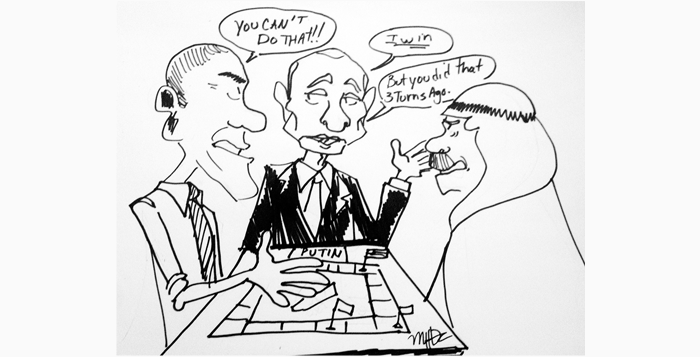 Russia is in the midst of annexing the Crimea, with the possibility of a war with Ukraine looming overhead. Over the course of the past few weeks, Crimea went from being a more-or-less forgotten peninsula, most noteworthy for the Crimean War, fought in 1854 between an alliance of Britain, France and the Ottoman Empire against the Russian Empire, to the center of international attention. Once again, Crimea enters the international spotlight.

In the American media coverage of the ongoing Crimea crisis, most of the reporting that I have read seems quite biased against Russia, assuming from the beginning that Russia is misbehaving. In defense of American political leaders’ judgments, Russian leaders have told multiple outright lies. For example, Russian President Vladimir Putin alleged that hundreds of thousands of ethnic Russian Ukrainian citizens have fled to Russia, fearing persecution at the hands of ethnic Ukrainians; there has been absolutely no evidence of this. Nonetheless, certain aspects of the Russian position about the Crimean crisis remain true. I would like to explore the legitimate aspects of the Russian perspective on the ongoing crisis to elucidate the other side of this complex international drama.

On March 18, Putin delivered a speech to the Kremlin about the ongoing Russian attempt to annex Crimea. He began by declaring that the Crimean referendum was legitimate and proceeded to defend the annexation using a series of historical arguments and legal precedent.

Many write off Putin as a calculating practitioner of realpolitik, the political system that pragmatism, power and material concerns are what should decide a country’s decisions. While it is certainly true that his assertive diplomacy has a nihilistic pragmatism to it, Putin embraces an ideology that legitimizes this realpolitik and, more specifically, the Russian actions in Ukraine. This ideology has been called Eurasianism or the Fourth Political Theory, presenting it as an alternative to the three other dominant political theories of the past century: liberalism, communism and fascism.

Alexander Dugin, a Russian political scientist and ideologue, is the most prominent advocate of this “fourth” ideology. Dugin frames Eurasianism in opposition to liberalism, the ideology that has swept the world in the past 25 years, following the end of the Cold War. He believes that liberalism needs an ideological opponent, otherwise it descends into implosive chaos. Liberalism opposes any ideology that suggests that society should have a collective goal, such as Marxism, because liberalism argues that society should be based on the individual. Without an opponent, liberalism loses its purpose.

Without an opposing ideology since the end of the Cold War, liberalism has turned in upon itself. Liberal countries have been destroying their last “illiberal” elements, such as sexism, racism and homophobia, in order to have its always-necessary opponent, and maintain purpose. Through the Crimean crisis, the elites of the West are attempting to resurrect Russia as an enemy, to once again give liberalism a purpose. In the early 2000s, liberalism attempted to cast al-Qaeda and radical Islam as an enemy in the same regard, but only to limited success because it lacked significant global reach, save sporadic terror attacks.

Dugin believes the liberal West has presented Putin and Russia as villains, not because the Russian actions in the Crimea and the Ukraine are illegitimate, but rather because liberalism once again needs an enemy. In fact, there is tremendous popular support and historical precedent for the Crimea to once again be part of Russia. Crimea had been part of the Russian state since the end of the 18th century, when the Russian Empire captured the peninsula from the Turkic Crimean Khanate. Only in the 1960s did the Soviet Union give Crimea to the Ukrainian SSR, when the division between the central government in Moscow and the various republics was more nominal than actual.

Moreover, Western countries have strong domestic reasons not to allow the Crimea to secede. There are prominent regional secession movements in various Western countries including: Catalonia from Spain, Scotland from the United Kingdom and Quebec from Canada. If the Crimea unilaterally secedes from Ukraine, these other regions may attempt the same. A dangerous precedent would be set for these countries. There is tremendous popular support in Crimea for it to join Russia. In a referendum regarding secession on March 16, 93 percent of Crimeans voted to join Russia. More than 80 percent of eligible voters participated in the election. One minority group, the Tatars, who constitute 12 percent of the population, abstained from the election. But, even if they all voted against secession, there would still be a vast majority in favor of Russian annexation.

International observers have criticized the Russian use of military power throughout the crisis, claiming that it has been used to leverage the situation in their favor. Russian has responded by claiming that the troops have been deployed to protect the ethnic Russians in the Crimea, who constitute over 60 percent of the peninsula’s population, particularly from fascists.

While many commentators in the West have brushed off these accusations, Ukraine is in fact home to Svoboda, one of the most influential far-right parties in Europe that also controls over a quarter of national ministries. The deputy prime minister of Ukraine is also a member of Svoboda. The far right party’s radical beliefs include: increased state involvement in the economy, using ethnicity as a basis of government representation and benefits and criminal prosecution for anti-Ukrainian sentiment. A party leader is on record claiming that Ukraine is run by the “Muscovite-Jewish mafia,” and one of its members of parliament founded the “Joseph Goebbels Political Research Centre” and has hailed the Holocaust as a “bright period in human history.” Putin has also cited a failed piece of proposed legislation that would limit the use of Russian as an official language as a example of the threat that ethnic Russians face in Ukraine.

This is only one of multiple perspectives on the ongoing crisis in the Crimea. While by no means am I advocating the Russian perspective as ultimately correct, it is nonetheless important to understand that there are certain aspects of Putin and Russia’s position that remain true and, certainly from their perspective at least, just. We in the liberal West tend to automatically denounce any perspective that falls outside our conception of the post-Cold War order. This post-Cold War order is ending, as other non-Western powers, such as Russia and China, become more powerful. We should therefore attempt to approach the Crimean crisis and future international dilemmas with a more open-minded perspective, trying to understand the other sides’ ideologies.