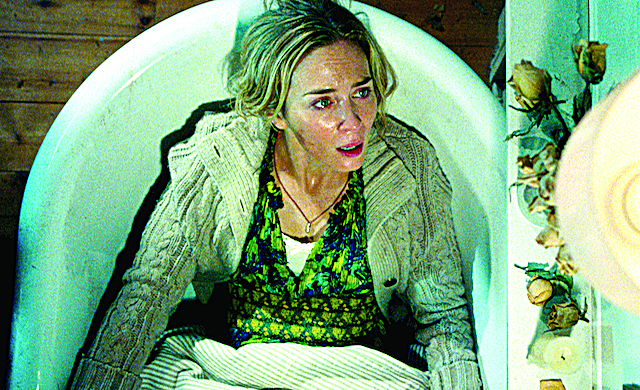 Cinema is a story told through images. The medium itself was born in the nitrate fire of silence, defined by visual storytelling. With the advent of sound, the audible side of filmmaking became a complement to the visual. Thus, films often don’t contain the care behind the camera to utilize both sound and image to their full extents. “A Quiet Place” is not one of those films. A tear-stained, 90-minute panic attack, the film, written and directed by lead actor John Krasinski, is a maturely made and emotionally involving trip into personal fears where the terror comes from sound’s quiet pounce upon the image.

Sometime in the near future, humanity has been almost completely eradicated. A blind species with highly evolved hearing has taken over Earth. As fast and deadly as a bullet, these creatures go in for the kill at the slightest of sounds. We learn this information through stranded newspapers and media, as we are dropped into the middle of our central characters’ quest for survival. The Abbott family — father Lee (John Krasinski), mother Evelyn (Emily Blunt) and their children Regan (Millicent Simmonds), Marcus (Noah Jupe) and Beau (Cade Woodward) — scavenges a grocery store for goods. Beau attempts to take an electronic spaceship with him, but Lee intervenes, removing its batteries. Regan gives the toy back to Beau in a gesture of kindness, but it makes too much noise and eventually leads to his death. The film creates a portrait of the Abbott family’s struggle to survive in the wake of Beau’s death as they establish a complex homestead in the countryside.

For someone who has made his living primarily in comedy and television, Krasinski exhibits an exhaustive knowledge of cinema and clear lines of formal thinking of which other first-time directors could only dream. It’s surprising, because many actor-turned-director projects feel like little more than vanity projects, but Krasinski’s personal investment in the film — as its writer/director/star and as a parent himself — makes for a profoundly affecting piece of work. Blunt, his offscreen wife, steals the show in her near-silent role as Evelyn, an effectively strong contrast to Krasinski’s grief-stricken Lee. Together, they form a powerful pair of cyphers for the fears that parents face, namely the inability to truly protect their children from the world’s dangers. Their characters form the crux of “A Quiet Place”’s thematic concerns, which add a tremendous emotional weight to the masterful horror set pieces. Audience members end up truly caring for this family, and the stakes of their survival couldn’t be higher.

As for the two lead child actors, both are remarkable, but the spotlight belongs to Simmonds. Fresh off her astonishing turn in Todd Haynes’ “Wonderstruck,” Simmonds gives a quietly forceful performance as Regan, the eldest of the siblings who also happens to be deaf. She is the quickest to act out, mostly out of guilt over her brother’s death, but ultimately has to hold Marcus together when they end up stranded without their parents. It’s also a praiseworthy casting, in that Simmonds is, herself, deaf. Regan’s deafness is not treated as a gimmick, but Krasinski thoughtfully experiments with diegetic sound when embodying her perspective, adding to the quiet soundscape of the film. In a surprisingly sensitive turn of events, her disability proves to be crucial to securing her own safety, as well as that of her family’s.

These wonderful touches are a credit to the astute screenplay, written by Krasinski, Bryan Woods and Scott Beck. The narrative is tight, but takes its time in scaring the audience. In the first half of the film, very little happens, allowing every character to develop their own arc that is satisfyingly concluded in the nightmarish second half, which interrupts nonstop set-pieces with moments of quiet drama. However, these set-pieces are carefully composed, perfectly balancing movement and stillness, loudness and silence. Jump scares are principally effective, as they become the film’s primary scare tactic. There are plentiful touches of early Spielberg in Krasinski’s direction, with his firm grasp of the entertaining horror form and emotional family dynamics.

However, this auditory experience is inconsistent in one front — music. On its own, Marco Beltrami’s score is one of the best horror scores in years. It’s a distinctly unnerving mix of shrieking strings and ambient electronics, but it mismatches the subtlety of Krasinski’s vision, though it is often leaned into in the film’s most active moments. Though effective at creating terror, it doesn’t feel right in the film’s formal context, providing a loud and obvious counterpoint to the quiet scares that refuse to emotionally spoon feed the audience. An even more experimental approach to sound, one without the aid of music, would have been impressive, but Krasinski’s decision to include a musical score in a film geared towards a broad audience is understandable.

When watching “A Quiet Place” in a theater, the audience is choked with their own silence, afraid to let out the exclamations often found in communal experiences of terror. I found myself afraid to make a sound, instead digging my nails in the armrests of my seat and burying my face in my knees. In particular, watching a second-act sequence involving a pregnant Evelyn was one of the most stressful moments of my filmgoing career. This terrifying high is a testament to Krasinski’s direction, as well as the talented cast and crew involved, but it doesn’t scratch the surface of this impossibly rich film. Above all, “A Quiet Place” is a touching and complex look into the psychology of parenting and the very real fears it elicits, as well as how a species and artistic medium both survive. In an era when some view film as an art form in the midst of its death throes, such bold, committed formal work cuts through the clamor with a whisper.