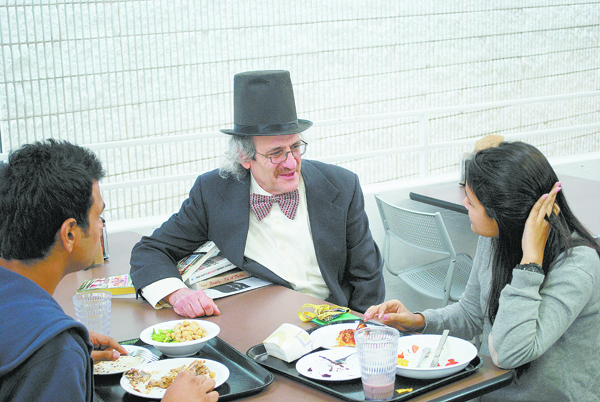 If there is room next to you while you eat in the Dobbs University Center, this stranger may ask, “Do you mind if I sit down?”

The first thought that may hit you is that this man is weird.

His shaggy, untamed grey hair sprouts out from his head like a lion’s mane, and his body is consumed by a grey suit, a green knitted vest and an oversized pair of blinding white pants that he occasionally pulls up while he walks. He is short, and he carries no briefcase or bag, just a set of manila file folders stuffed with disorganized, illegible notes and papers that stick out from the pile. If you let him join you, he may ask you what your major is, if you like Emory, what your parents do or what career you want. In between those questions, he may miss his mouth as he uses his fingers to eat peas.

This man, oddly enough, is fully aware of himself.

This man is Neil Shulman, an associate professor at Emory’s School of Medicine.

“Instead of browsing through the library, I browse through the cafeteria,” Shulman says in a nasally, rough and deliberately slow voice. “I don’t have a specific agenda when I talk to someone … I know it’s not normal – what I do.”

Shulman’s evolution as a campus character has been decades in the making.

He started his career in academia with a bachelor’s degree from George Washington University in political science. Shortly after receiving his School of Medicine degree in 1971 from Emory, Shulman started teaching at the school. Since then, he has simultaneously explored various career avenues from writing to acting to inventing.

It is quite amazing how many Emory students know of this man. He has about four to five cafeteria conversations a day. Conversations last anywhere from 15 to 45 minutes. Some of those conversations have been the start of friendships.

“Just to give you an overview of my philosophy, I think that everybody is a book but they just haven’t [been] written [about],” Shulman says, in between stuffing his green peas down over a meal. “In other words, everybody has a table of contents. To me, it is one of the most enjoyable things I do because it’s like traveling all over the world, but I don’t have to get on an airplane.”

Although many students dismiss Shulman as an eccentric stranger, there are some who, through conversations, come to know one thing for sure: Shulman is accomplished.

A scientist and a doctor who has co-authored or authored more than 50 scientific papers, Shulman once acted as a co-investigator of approximately $8 million in cardiovascular clinical research grants and worked as a consultant to Georgia Department of Human Resources to create rural and inner city community health clinics.

Shulman is an inventor who holds the patents for a log cabin with a retractable roof and a book that opens into a poster. He is a stand-up comedian who has performed for the United Nations, the Los Angeles Times and Coca-Cola National Headquarters. He is an activist and a volunteer who has protested against rape in the Democratic Republic of the Congo and has set up health clinics in Africa.

Shulman has also authored about 30 children tales, health books and novels, one of which – “What? … Dead Again?” – was turned into the Warner Bros. movie “Doc Hollywood” starring Michael J. Fox. Shulman worked as associate producer for that film and for the CBS film “Dreams of Gold.” His movie credits don’t stop there; he was the screenwriter for the major motion picture “The Backyard Tribe” and a producer for an independent feature film and two documentaries. Shulman has created children’s television shows about health and a series of humorous medical shorts that aired on CNN. On top of all of this, he has acted in three films, some of which were his own productions.

Because he has made his money through film, Shulman doesn’t have to focus on making a living. He currently takes a modest $15,000 yearly Emory salary to participate in sporadic activities like guest lecturing rather than leading a structured course.

And that attitude is most exemplified by Shulman’s generous acts of smaller scope. A while back, one of the cafeteria workers asked Shulman if he could help collect money to pay for the funeral of another worker. So, Shulman walked around the DUC with a hat and asked around for donation money.

But one of his most valiant efforts is the International Medical Volunteerism Center, which he founded and used to organize the annual Global Health and Humanitarian Summit – a four-year-old, free conference at Emory where about 200 speakers from all over the world present about international medical volunteerism to about 1,500 attendees.

Sophomore Tony Xu met Shulman at the cafeteria in October and although he initially thought the conversation was strange, he jumped on the opportunity to help with the summit.

He says Shulman continues to bring in new cafeteria strangers to their Sunday organizing meetings.

“He is a very ambitious man,” Xu says. “If he wants something done, he will talk to people. He was not afraid to say what he wanted.”

One afternoon, I join Shulman to meet up with Kelly Arps, first year medical student, to discuss the Global Humanitarian and Health Summit and her potential involvement.

I watch as they sit across from each other in the lounge of the Psychology building. Arps – dressed in a professional dress and tights – has her palms clasped together on her lap and her back straight. Shulman slouches in his chair and sways his leg, which is rested on his sofa arm, back and forth, exposing his old, tattered sneakers. But it is Arps who is mesmerized by the relaxed man as he continues to explain the problems of monetization in health care.

That seems to be a consistent pattern with this man: until students actually engage in a conversation with Shulman, it is easy for them to make judgments. On the way to the meeting with the medical student, some students walking just stared at Shulman.

He knows he looks strange. He doesn’t care.

Growing up in Washington D.C, Shulman explains, he was a “total klutz.” He would step on a girl’s toes when he danced with her. He would eat but often miss his mouth (that is still the case). His classmates laughed at him and his self-consciousness rose.

“And then, for some reason or another, it just dawned on me one day,” Shulman said. “Whether they laughed at me or with me, it makes no difference. I am making them happy.”

His appearance, clumsiness and habit of chatting with strangers aren’t the only ways he defies social norms. He is a 67-year-old man married to a 38-year-old Canadian ex-clown – his first wife – with a 6-year-old son.

Shulman’s wife, Zoe Haugo, says her husband’s quirkiness was what initially attracted her to him a decade ago when they first met at a fundraiser for a community clinic in Canada.

Haugo had attended the fundraiser to see Patch Adams – an American clown and activist – and mistakenly thought Shulman was Adams.

Over the years, Haugo has realized that, even though they are very different in many ways (Haugo would not call herself outgoing), both of them like to have fun.

And their home reflects that: it is covered with every imaginable color, filled with quirky, large art (much of it created by their son, Myles Shulman) and has a large wall of books.

What the home most reflects is Shulman’s free spirit; the various products consuming his home stem from all his interactions with random people and the projects he pursues. To name a few items: a Neil Shulman bobble-head, a large puppet used in a demonstration to raise awareness about the crisis in the Democratic Republic of the Congo, a fully furnished dollhouse, a couple of huge wooden camels and sprinkle-covered chicken nuggets.

Haugo says that Shulman connects with people on such a degree that he doesn’t spend much time in the house. When he is home, he usually has brought new people with him to show them his projects or to collaborate with them on something new.

“At any time of the day or night, we never know when Neil and a troop of people from Africa or China or Australia or anywhere can arrive at our door … and chat with us,” Haugo says. “No two days are ever the same.”

This life, she says, is due to Shulman’s genuineness, tenacity and playfulness.

“My overall philosophy is that we all won the lottery,” Shulman says. “That one sperm hitting that one egg gave you the dash of life. I think that we all should just help each other have a long, happy, healthy dash.” 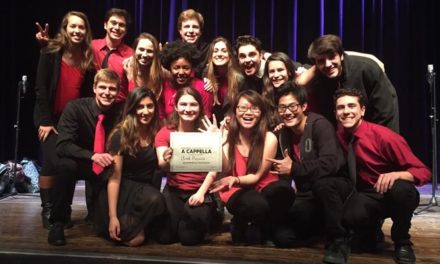