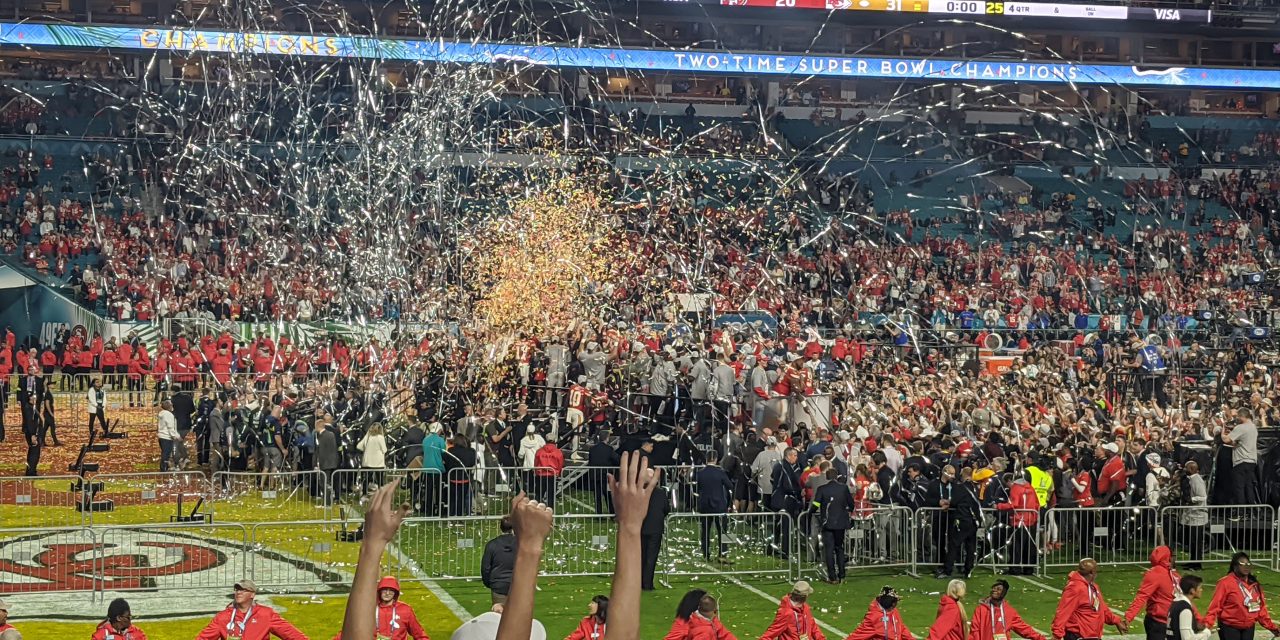 While sports leagues and conferences nationwide have had their calendars completely thrown off by the COVID-19 pandemic, the NFL has yet to be impacted significantly. Slated to kick off on Sept. 10 at Arrowhead Stadium in Kansas City, Missouri, defending Super Bowl champion Kansas City Chiefs will open their season against the Houston Texans. 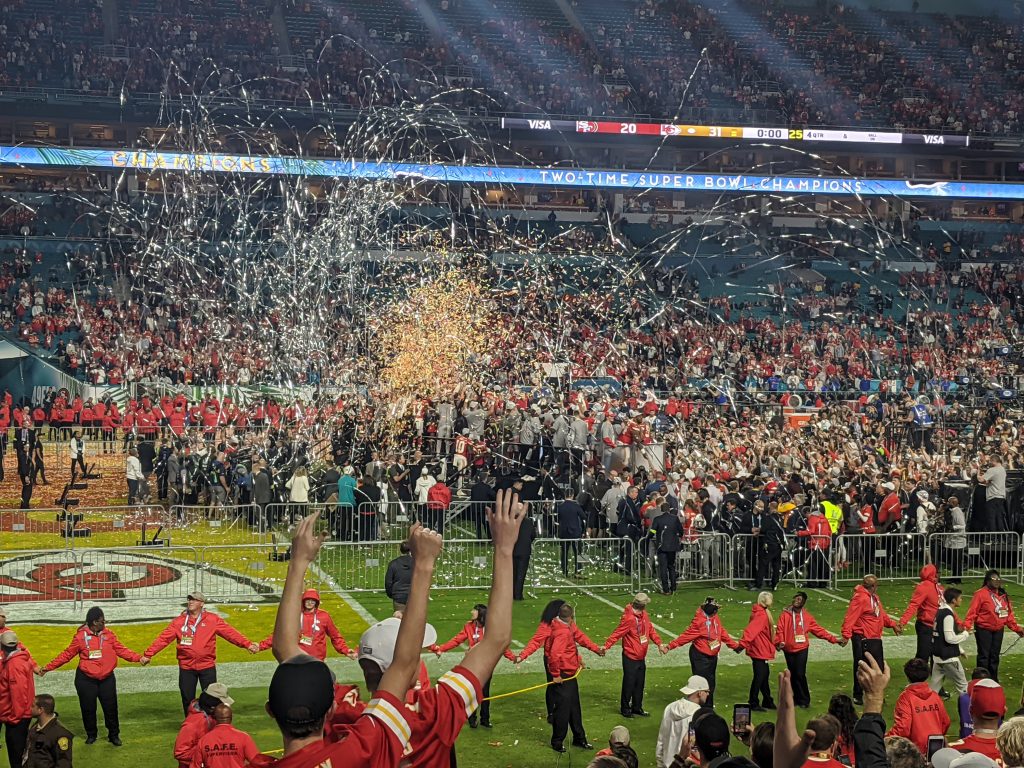 Fans celebrate the victory of the Kansas City Chiefs over the San Fransisco 49ers in Super Bowl LIV. This year’s leaders, though, are yet to be seen./Courtesy of Wikimedia Commons

While the NFL schedule is still on track to start on time, nothing is certain. The league created a flexible schedule in case games have to be canceled due to outbreaks.

Road trips have been combined to limit necessary travel. For example, the New England Patriots play the Los Angeles Chargers and Los Angeles Rams in their new stadium in back-to-back weeks; they play the Chargers Dec. 6 and the Rams four days later. This prevents the Patriots from making two cross-country trips and thus decreases the risk of contracting the virus while traveling.

Not only will road trips look a lot different for teams, the games themselves will feel emptier and quieter, at least at the start. Teams will play their home games either in front of an empty stadium or a stadium with limited capacity. The Atlanta Falcons recently changed their original plan and will now have no fans at games through at least September. They join other teams in COVID hotspots around the country like the Arizona Cardinals and Houston Texans, which will revisit fan attendance later in the season. The New York Giants and New York Jets won’t be able to hold fans at any point this season after New Jersey Gov. Phil Murphy issued an executive order banning gatherings of more than 500 people throughout the calendar year.

The lack of fans, though, comes at an unfortunate time. With three teams in the NFL boasting new stadiums this year — the Las Vegas Raiders, Chargers and Rams — all will play their inaugural home openers without fans, and the Raiders won’t hold fans until next season at the earliest.

This season will also certainly appear unlike any other on the field. Teams will have to have enough depth on their rosters so that their backups can instantly play in case a player is sidelined due to COVID-19. As such, teams’ starting lineups may differ greatly week to week. Without preseason games this season due to the pandemic, teams are now forced to narrow rosters from 90 players to 53 by Week 1 based solely on practices and scrimmages. This creates a further challenge for coaches and players to develop chemistry and comfort with each other on the field without help from the preseason. As a result, NFL teams that did not make many drastic changes from last season to this season and who have strong veteran leadership and experience will likely have the most success during the 2020 NFL season.

The New and the Old: The AFC

In the AFC, eyes are on the Baltimore Ravens, Buffalo Bills and defending champion Chiefs. Despite the loss of guard Laurent Duvernay-Tardif, who opted out for the season to be a doctor fighting COVID-19 on the front lines, the Chiefs will once again dominate offensively with MVP quarterback Patrick Mahomes under center. Mahomes now has former Louisiana State University running back Clyde Edwards-Helaire, the team’s first-round pick in the 2020 draft, in the backfield. On defense, Pro Bowl safety Tyrann Mathieu and defensive end Frank Clark lead the team for another season and are expected to make improvements.

My decision regarding the 2020 NFL season #nfl #covid_19 #chiefs #kansascity

The Ravens are looking to bounce back from their first-round playoff exit last season. Reigning MVP quarterback Lamar Jackson has had time to adjust to the NFL and is now ready to take his team to the next level. The offense didn’t take any major blows this offseason, and Jackson now has former Ohio State running back J.K. Dobbins as a versatile, pass-catching running back option. Although the Ravens recently cut safety Earl Thomas after he was involved in a fight during practice, the team’s defense is still loaded with elite players, including defensive end Calais Campbell and cornerback Marcus Peters.

Last season, the Bills made significant defensive improvements, and they will now have an easier road to the AFC East division title as they no longer have to face former New England Patriot quarterback Tom Brady, who left for the Tampa Bay Buccaneers in the offseason. Brady’s departure is important for the Bills, as they have lost the last seven games to New England dating back to October 2016. Buffalo added Pro Bowl wide receiver Stefon Diggs, cornerback Josh Norman and defensive end Mario Addison, along with the players they selected in the 2020 NFL Draft, all of whom bring substantial value to the team. Quarterback Josh Allen has to work on his decision-making skills, but his new weapons and easier schedule puts him and the team in a situation to make a legitimate run for the conference championship.

Connections and Chemistry: The NFC

In the NFC, expect to see the New Orleans Saints and Seattle Seahawks lead the pack as they brought back much of the same rosters as last season, when they both made the playoffs. New Orleans will be led by quarterback Drew Brees, who has a phenomenal group of receivers to whom to throw. Wide receiver Michael Thomas broke many all-time catching records last season and will look to break more this season. If Brees and Thomas can’t connect, the team added former San Francisco 49ers wide receiver Emmanuel Sanders and will once again have tight end Jared Cook and running back Alvin Kamara to take on some of the pass-catching duties. Although the Saints are in arguably the most competitive division this season with the Buccaneers, Falcons and Carolina Panthers, New Orleans’ leadership and experience likely guarantee that they will be a contending team once again.

With elite quarterback Russell Wilson and head coach Pete Carroll leading the team, Seattle has missed the playoffs only once since they paired up in 2012. Wilson has many options at his disposal, with running back Chris Carson and receivers Tyler Lockett and D.K. Metcalf all returning from last season. While their defense lost defensive end Jadeveon Clowney, they added All-Pro safety Jamal Adams last month in a blockbuster trade from the Jets to mitigate the loss of Clowney. Adams joins safety Quandre Diggs as Seattle tries to revitalize the legendary “Legion of Boom,” which was torn apart after the Seahawks’ Super Bowl loss in 2014.

For teams like the Buccaneers and the Indianapolis Colts who ostensibly made big offseason moves, their likelihood of success is still minimal and will not put them seriously in the race for the Vince Lombardi Trophy. The Buccaneers added 43-year-old Brady and traded for tight end Rob Gronkowski, who came out of retirement to join Brady in Tampa Bay. Although they have one of the best receiver squads in the league with Chris Godwin and Mike Evans, there are too many problems with their defense to beat out the Saints for the NFC South crown. They finished 30th in the league in defending the pass and surrendered the fourth-most points last season.

The Indianapolis Colts moved on from quarterback Jacoby Brissett, at least temporarily, and added former Chargers quarterback Philip Rivers. Indianapolis also drafted former Wisconsin running back Jonathan Taylor to anchor the backfield, but Rivers’ limited time in Indianapolis may hurt the team’s chemistry at the season’s start. Their defense improved with the acquisition of defensive tackle DeForest Buckner from the 49ers, but that addition alone won’t be enough to compete with the rest of the AFC.

Although the Green Bay Packers and 49ers were last year’s NFC championship teams, they each seem to be lagging behind heading into the season. The Packers didn’t add any new receivers to help quarterback Aaron Rodgers and drafted quarterback Jordan Love to be the quarterback of the future, leading many to believe the Rodgers era in Green Bay is nearly done. The 49ers lost Buckner and Sanders this offseason, and their inclusion in a division with the Seahawks, Cardinals and Rams will make it difficult to have a repeat season.

While it is challenging to focus on the actual game among the chaos of the pandemic, the NFL’s coronavirus protocols — with constant testing and isolation — put the league in a prime position to be able to play this season with minimal interruption. And although there will be unforeseen barriers, the league is doing all it can to make this season as “normal” as possible.