A Glimpse Into Trans Life at Oxford College 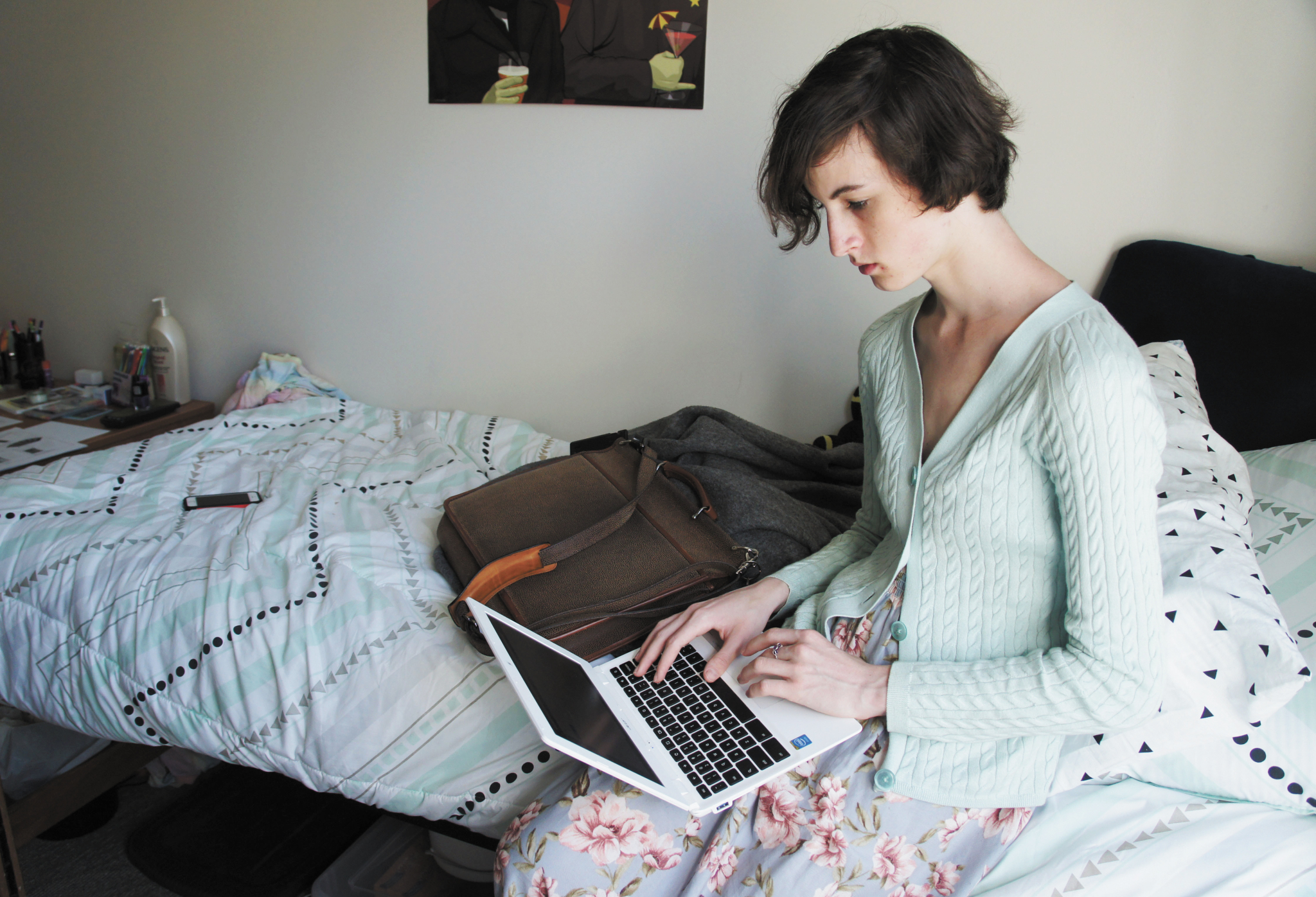 At the start of college, many students join campus organizations hoping to find a like-minded community of people who can understand them. Oxford College freshman Rose Porter attended Oxford’s PRIDE meeting in hopes of finding students who could relate to her story as a trans woman shortly after her arrival to campus this fall. Unfortunately, she did not.

“There’s a lot of people who probably still see me on campus and don’t really know what to think of [me], and that’s kind of weird,” Porter said. “It’s rough because there are no other trans people [at Oxford] by which any context can be given, or kinship to be had.”

Porter felt a sense of loneliness upon realizing that she was, to her knowledge, the only openly trans person at Oxford, but she has still been able to find an accepting community within the liberal arts campus.

Before calling Oxford home, Porter was born in Atlanta, Ga. She then moved to Gainesville, Fla., at a young age. As a child, Porter said that she didn’t think in terms of gender. She just liked certain things that happened to be traditionally feminine, such as the idea of geishas or female characters on TV. For this, she often felt harshly judged by society. However, as she matured, she realized that who it is she was trying to be and who it is she wanted to be was what society would call a girl. She felt restricted in her way of life because she was expected to act like a boy; eventually, she realized that she had to change.

But even as a trans woman — even after changing how she identifies — Porter feels restricted. Porter said  she now feels as though she is expected to act in alignment with society’s ideals of a typical woman, and while cisgender women are also judged by this code, Porter believes that it can be a much harder standard to reach for trans women. She said that it is important that she act ultra-feminine and that she is expected to tailor her behavior to fit into that feminine mold if she wants to be taken seriously: the way she carries herself, speaks, stands and her mannerisms are judged more radically by society’s definition of femininity.

“No one knows the social codes for how women are supposed to behave better than trans women,” Porter explained.

Struggles like these continued after Porter arrived at Oxford. According to Porter, she does not always pass as a girl and thus feels inclined to explain herself in new environments. She said that she had to constantly re-introduce herself and explain that she was trans to everyone, furthering  her feelings of isolation.

Porter describes her life as normal, despite certain aspects that are hard for her. According to Porter, communal bathrooms scared her when she first came to college, and the showers still do. She usually tries to spend as little time in the communal bathrooms as possible.

“Part of living my day-to-day life is being very, very consciously aware of your presence in social situations and what people are thinking and looking and doing,” Porter said.

This includes her dorm room, where she was prepared to never be nude in front of her roommate, so her roommate would not feel uncomfortable. She bought full-length, total body coverage pajamas. According to Porter, her roommate, Oxford College freshman Annalys Hanson, luckily cared little about nudity .

“She needed a safe place,” Hanson said. “There aren’t any other trans people on campus; it’s up to somebody who was cisgender to step up and make it a safe place for her.”

Hanson believes that Porter being trans has only brought benefits to their room. Hanson and Porter mutually respect each other and work hard to ensure  both are comfortable within their living arrangement. According to Hanson, her family was initially concerned with her roommate choice, but she was sure she wanted to room with Porter and feels very safe in their room.

Oxford’s housing policy states that students will be paired with someone who identifies as the same gender, according to Assistant Dean for Campus Life, Office of Residential Educational and Services (RES) Director and Chief Conduct Officer Michele Hempfling.

Porter was unaware of the same-sex roommate policy and afraid that she would have been assigned a male roommate if she had not found a female roommate on her own. She said that she could not imagine having a better roommate.

Outside of the room, though, Porter has found that identifying as trans can make it difficult to join certain social groups and make friends. In general, Oxford students treat her politely, Porter said. Although she has heard rumors about herself that sometimes include slurs, she believes that these reactions stem mostly from confusion and curiosity, not necessarily from malevolence. Porter enjoys educating others about issues of misunderstanding, and she is happy to help anyone who is confused or needs explanations.

Despite Porter’s belief that frictional transphobia is still embedded in Oxford’s campus, she says that the faculty and staff have been very supportive, especially Oxford Dance Instructor Alejandro Abarca, who offered to be there if she ever needed to talk. Porter explained that Oxford as an institution did not have to go out of its way to make her feel comfortable, since Porter is currently rooming with a cisgender woman and enjoys the school’s gender-neutral housing and secluded bathrooms.

“I think what a lot people don’t realize is that Oxford is a much more trans-accepting place than most of the places [I have lived],” Porter explained. “I got more harassment at my high school for being trans than I ever had at Oxford and probably ever will at Oxford.”

Porter’s Oxford community has been more than open and mature when approaching Porter about being trans. However, she still wishes people would see the bigger issue represented by her story.

“Trans people are a testament to everything that is wrong with how we view gender,” Porter said.

She added that our society needs to learn how to accept and understand trans people, but also what exactly trans people say about this society.

Porter eventually wants to get into trans activism and work with trans youth. She plans to double major in sociology and women’s, gender and sexuality studies.

The University itself has also tried to educate people about gender; however, its efforts are not always successful. During orientation, for example, Porter found the the Peer Assistance Leaders’ (PALs) skit trying to explain trans people inaccurate.

“You have this cis girl actor [with a] ponytail, tight jeans and everything come on, and she starts talking about how she doesn’t feel like a woman and that was just kind of like, ‘I don’t think you guys really get the idea here,’ ” Porter said. “And then of course they had a cis man actor, who was [a] scruffy, very manly looking guy come on and say, ‘I feel like a woman,’ and of course everyone laughed at that, and that was kind of rough.”

Porter did not feel attacked, but she also did not think the skit helped protect the trans community. She said that events like this skit are unavoidable if students are uneducated about trans people.

Overall, Porter said that Oxford does a good job in ensuring she feels accepted. She explained that in order to protect the trans population at Oxford, the College has implemented policies such as the Safe Space program, which trains allies to help and advocate on behalf of LGBT students, and anti-discrimination policies. Although she has never felt the need to use these tools, she appreciates that there are people she could turn to if necessary. Porter encourages society  to work on many gender issues, but she understands that colleges can only do so much. As long as colleges continue to accept trans students and make them feel comfortable, Porter believes that they are encouraging the necessary discussion.

“[Trans people] don’t exist as this outside anomaly. We exist as a result of systems that everyone lives in and that’s kind of scary,” Porter said. “Gender is something that affects everyone. … I think people need to realize more … how gender affects them, look at how [these] systems affect them.”