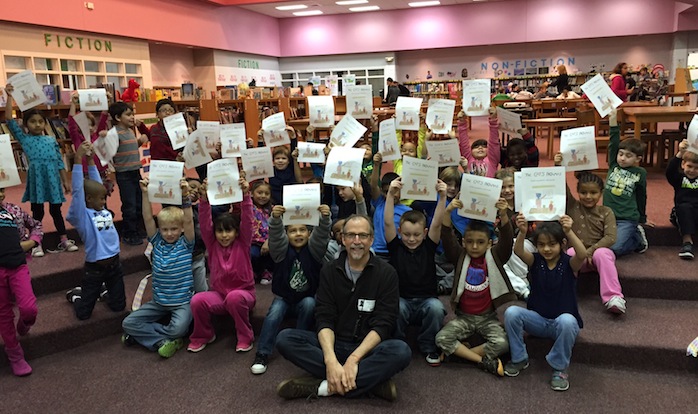 Wallace’s Marketing Manager Angela Melamud said that the book tells the story of a special cat.

“Louis Fellini, [is] a kitten who dares to dress differently in a world full of copycats. It isn’t as easy as you might think to be yourself, especially when everyone else looks the same, but Louis Fellini found a way,” Melamud said. “He was just that kind of cat. He was the cat’s pajamas,”

Wallace said that his book was inspired by that very phrase, “the cat’s pajamas,” which he decided originated from a society of cats that used to wear pajamas in a world influenced by one particular cat named Louis.

He went on to explain that he’s not sure that the book has any significance at all, but he certainly enjoyed writing and illustrating it.

As for the moral of the story, he insists that that’s for the readers to decide for themselves.

This is not the only piece of written work that Wallace has produced. In fact, in the past five years, he has written five novels, including: Big Fish (1998), The Kings and Queens of Roam (2013), Mr. Sebastian and the Negro Magician (2007), Ray in Reverse (2000) and The Watermelon King (2003). He insists that he will write many more books, but none having to do with his newest publication.

Unique from his other books, The Cat’s Pajamas was published by Inkshares, a crowdfunded publisher, meaning that the company funds each idea by gathering small increments of money from many individuals who choose to support the given project.

“We edit, design, print, distribute and market books. Unlike other crowdfunding platforms, Inkshares doesn’t just help you raise funds to produce your book, we also assist authors in the role of a traditional publisher. [We use] the crowd to select and fund the works we produce,” Melamud explained in an email to the Wheel.

In other words, each person who contributes to the crowdfunding is essentially voting for the book to exist.

Despite his growing popularity in the world of children’s stories, Wallace admits that he did not always know that he wanted to be a writer, even pointing out that when he came to Emory, he had no intention of becoming an author.