As campus began to stir with Halloween festivities on Oct. 29, many students found themselves packed into White Hall 111. Audience members spilled onto the stairs in the aisles, some wearing Halloween costumes. Students had gathered to watch a comedy improv show by their peers.

The night began with an opening game called “Tinder,” led by the troupe’s president Brooke Daly (22C), in which cast members took turns playing characters related to words suggested by the audience.

Daly said the troupe kicks off each show with these kinds of openers, which are designed to warm up the crowd. “Tinder” served as an effective way to enliven the high-spirited audience, who had no shortage of Halloween-themed word suggestions for the first game. 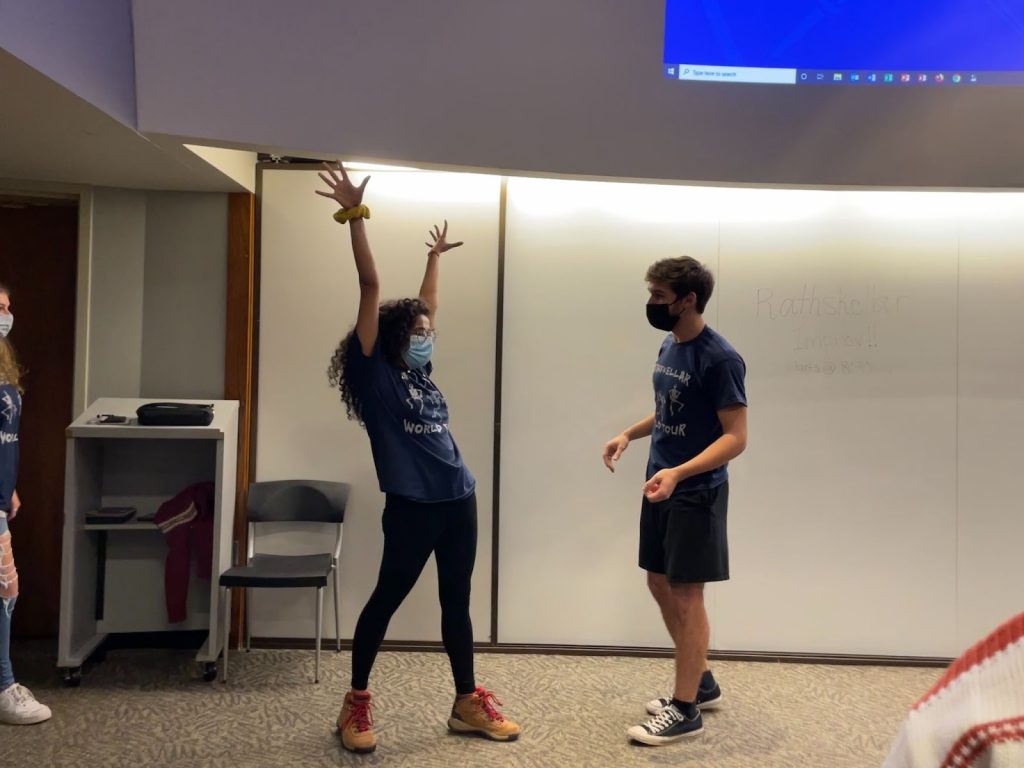 The cast took the stage following word suggestions from the audience like, “Cowboy! Pumpkin! Fruits! Baked goods! Teletubbies! Cats! Romantic!” with Treasurer Ruth Korder (23C) playing the role of the distressed Tinder user “swiping” through each cast member’s portrayal of a Tinder profile.

Daly said she noticed increased audience participation during this performance compared to past shows, including a recent show in September, which she attributed to the upcoming holiday: Halloween-themed suggestions flowed freely.

As for the cast itself, Daly said the troupe had “good energy” on stage, and despite some nerves, excitement won over.

“It’s our first show, and everyone was excited,” Daly said.

Through the duration of the show, the more experienced cast members — Daly, Korder, High Priestess Haley Ornstein (22B) and Social Chair Noah Gentry (23B) — demonstrated talent and leadership within the troupe. However, some of the newer members admitted to feeling some nerves leading up to the show.

“I was getting more and more nervous the weeks coming up because we started realizing a lot more of the skills and things you need to watch out for in an improv scene,” Banul said. “But then when we did the full run through … I felt really natural.”

Banul played the host in the troupe’s next game, “Party Quirks,” with the rest of the new cast members. The audience supplied the type of party and gave each “guest” a quirk. Quirks were kept secret from Banul, who would attempt to guess each trait later in the game.

The scene unfolded on stage, to the amusement of the audience: a chaotic pasta party in which Block could speak only in alliterations, Sharma did frequent pushups mid-sentence and Mesnik channeled the persona of John Cena.

Banul appealed to the sensibilities of a college audience with a quip about studying abroad in Italy. Sharma maintained high energy and comedic vocal inflection while doing pushups. Block’s alliteration and Mesnik’s witty one-liners garnered hearty laughter from the audience.

Even within the group of new cast members, the troupe’s chemistry was natural, and an entertaining banter was established in each game. Daly said the troupe looks for chemistry in the audition process because exchanges between cast members are important for improv.

“When we’re playing games with people, we really interact with each other really well, and then outside of scenes, too,” Daly said. “I think the group dynamic is just really perfect.”

Sharma, a recent transfer student, said she decided to audition for Rathskellar on a whim because she had never done improv before.

“The group has been so welcoming, and it’s been an experience of learning and growing for everyone there,” Sharma said.

The remaining short-form games, “News Caster,” “Superheroes” and “It Takes a Village,” demonstrated an ease, creativity and spontaneous wit that could only come from practice, dedication and passion.

Through Rathskellar’s skillful production, a usually-dull lecture hall was brought to life. Emory students got to experience the gift of laughter, comedy and lightness after a prolonged midterm exam period. Needless to say, it was an uplifting display of school spirit.

“There’s a really great, alive crowd, and that makes doing the improv that much more fun,” Banul said.

Oli Turner (she/her) (25C) is from Manchester, Massachusetts, intending to major in creative writing and computer science. Previously, she was co-editor-in-chief of her high school newspaper, interned for the Manchester Cricket, and produced a short video series for a local cable news channel. Outside of the Wheel, she enjoys running, sewing, and writing short stories.