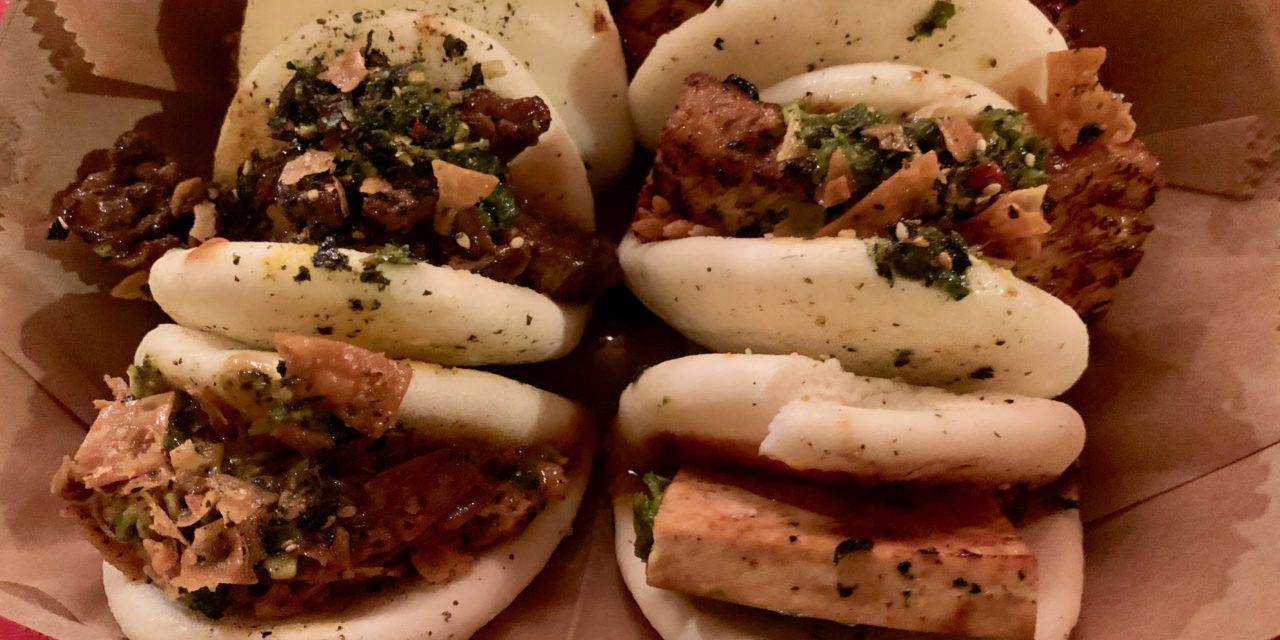 Asian cuisine has often been privy to unexpected cultural combinations, a concept known as Asian fusion. These eccentric flavors are especially prominent in Mushi Ni, the five-star-rated joint located in East Atlanta, which opened January 2017. Run by Tanya Jimenez, who worked at Chef Gordon Ramsay’s The London restaurant in New York City for five years, and her husband Michael Le, the restaurant prides itself in combining Asian and American comfort foods with organic ingredients.

Inside Mushi Ni, despite the somewhat crude and uncomfortable lines of tables directly across from the counter, I sat down and prepared to order a plethora of foods. While I scavenged the menu, the faint lighting and the vibrant communal setting raised my hopes that Mushi Ni would be the first Asian fusion restaurant I would enjoy.

I ordered the Tokyo fries, roti cake, pork bao buns and a six pack of baos that came out to a total of $28.

The Tokyo fries were the first to arrive, topped with umami spices and a small cup of truffle sriracha mayonnaise on the side. The fries were lightly dusted with salt, and the sriracha mayonnaise provided a sweet yet mildly spicy blend. For $3, the quantity of fries I received was somewhat modest. Yet the fries themselves did impress, not because they were incredible, but rather, because of their unique flavor that I had never tasted before.

Next came the roti cakes — Malaysian flatbreads stuffed with coleslaw and accompanied by sauce. I had ordered the Manila chicken adobo roti cake, which offered plenty of stuffing and proved a tasty meal. The juicy chicken was tender and soft, and the light brown adobo sauce provided an incredibly sweet taste that balanced with the plainness of the two rotis

After what seemed like a tasty meal, I was blown away by the pork bao buns I had ordered. They had a saccharine yet savory taste with a pillowy-soft steamed bun to accompany each bite. The meat was not over-salted, and the sweet sauce did not allow for any hint of a briny aftertaste, which was pleasing as my flawed cooking style often results in somewhat salty meats. For those who love a little sweetness to their meat, the pork bun proved to be an incredibly satisfying snack.

Last, but certainly not least, came the six pack of baos. From a choice of 12 different baos, six of which were vegan, I opted for the S&P tofu, drunken mushroom, lemongrass barbeque pork, manila chicken adobo, beef bulgogi and duck confit as the respective bao fillings. 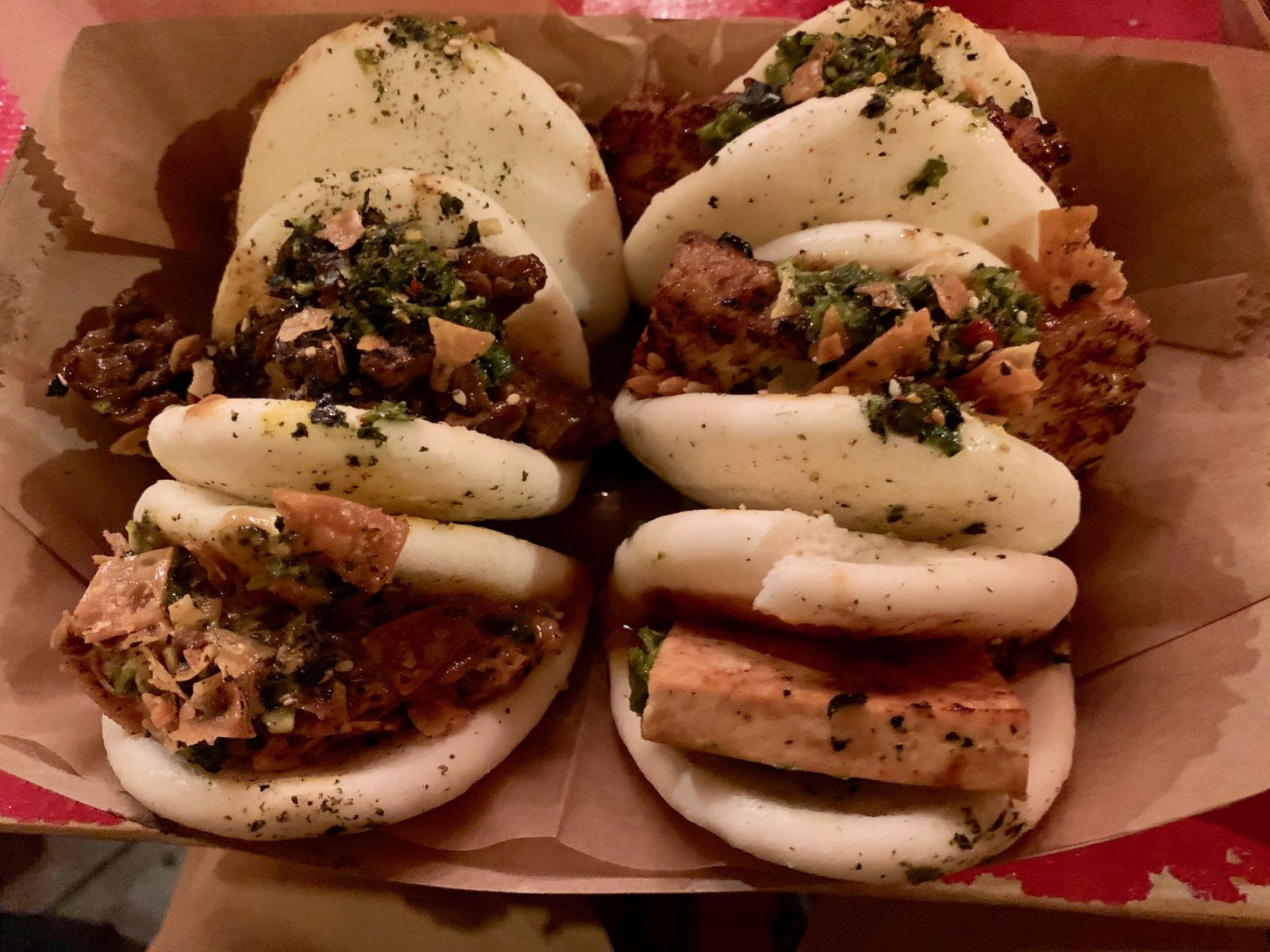 The five-star-rated restaurant Mushi Ni offers a pack of six baos from a variety of 12./ Sun Woo Park, Contributing Writer

The S&P tofu was arguably the most interesting of the six, as it provided a unique combination of gluten-free fried or seared teriyaki tofu inside a fluffy bao bun. The fried tofu was not too oily and proved delicious, yet was not that remarkable due to the awkward mixture of flavors since I rarely consume teriyaki sauce and tofu together.

The drunken mushroom exceeded my expectations. Soaked in sake, the button mushroom came alongside carrots and ginger which gave the bao a healthy, crunchy feel that contrasted sharply with the softness of bao bun.

I particularly enjoyed the lemongrass barbeque pork and duck confit baos. The lemongrass barbeque pork bao was composed of soft thick pork belly slices and lime garlic aioli. Meanwhile, the duck confit was the opposite. The Chinese-style Peking duck was much firmer than the pork, but certainly not dry, and had a sugary plum sauce, which was a stark contrast to the sourness of the lime.

The beef bulgogi and Manila chicken adobo baos were noteworthy for their taste, but were not as unique or tasty as the previously mentioned baos. Mushi Ni’s beef bulgogi failed to impress me due to my extensive consumption of excellent bulgogi marinated in sweet soy as a Korean American. The Manila chicken adobo was preferable with the rotis rather than in a bao, especially since I enjoy pork more than chicken in a bao.

Mushi Ni is located within We Suki Suki, a multicultural food market housing eight restaurants that create homestyle and affordable food. The market was compact and reminiscent of the street food markets in Korea during my childhood.

Coming to Mushi Ni, I was prepared to spend a significant amount of money to sample a wide variety of dishes. But Mushi Ni has, to date, been the first and only example of Asian fusion that lives up to my high standards, and it is no surprise that it holds a strong five stars on Yelp. Whether it be the richness of the pork buns or the sweetness of the roti cakes, Mushi Ni offers excellent Asian fusion cuisine that every Emory student should sample.