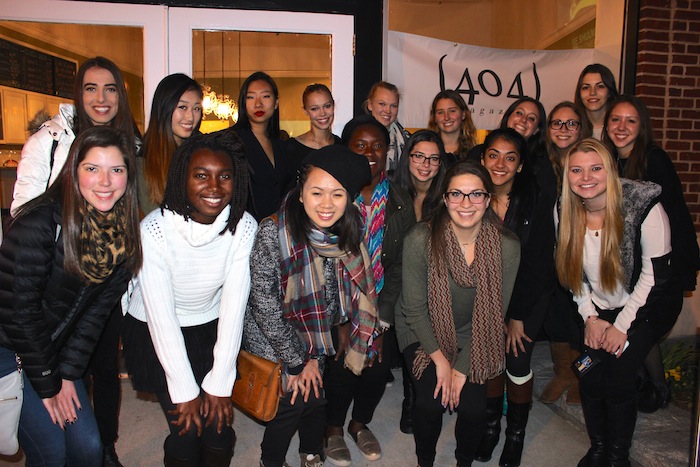 (404) magazine’s staff held an event at Ali’s Cookies in Emory Village this past Sunday, Nov. 16 for those interested in joining the staff. | Photo by Julia Munslow, Staff Writer

Emory’s student-run fashion magazine (404) held an event at Ali’s Cookies in Emory Village on Sunday, Nov. 16 to celebrate its new name and look and to promote its release.

The event included giveaways, the opportunity to meet the (404) staff, a preview of their lookbook and, of course, cookies.

“We wanted to get people excited about our lookbook, [an assortment of photographs highlighting the style and clothing of the model], and the magazine coming out in a few weeks,” Editor-in-Chief of (404) and College senior Jamie Shulman said.

Although (404) is, in its essence, a fashion magazine, Shulman described it more broadly, saying it is “a magazine for students who want to live creatively.”

In addition to many fashion-centered articles and photoshoots, the magazine, published once a semester, features items about lifestyle and society.

“[(404)]’s not just a fashion magazine,” Shulman said, emphasizing the versatility of the publication. “It strives to be more about culture and food and what’s going on in the Atlanta area.”

According to Shulman, (404) started in 2009 under the name of Bubble when a group of students decided that they wanted to create a concrete fashion outlet. Shulman decided to change the name of the magazine at the beginning of this year from Bubble to (404).

“[I wanted] to try to branch out to more people around campus and to get a bigger audience,” she said.

“[Those searching for a fashion magazine] need something to connect with them,” (404)‘s Art Director and College junior Yura Jang said. “[(404)] is that possibility.”

In addition to a new name, the magazine also has a revitalized look, deviating from the previous style of Bubble.

Shulman said that while Bubble had the feel of a scrapbook and used patterns and prints in its design, (404) has a more streamlined and minimalistic look.

“I really wanted to go in a different direction,” Shulman said, sharing her sources of inspiration. “I really liked the minimalist approach, a little more pop art, a little cleaner.”

Shulman credited Jang’s proficiency and skill as art director for the design of the magazine.

“[Jang] has a really good hold on what is aesthetically pleasing and not too overwhelming,” Shulman said.

The magazine strives to not only incorporate current trends but to also to give a new and innovative perspective on fashion. Instead of merely addressing the trends of the past season, (404) aims to put its own spin on collegiate fashion, incorporating ideas about fashion and beauty from Emory students themselves.

“I think it’s really important to know the current trends of college students and it’s a little hard when you’re really focusing on your schoolwork. This [magazine] liberates stress,” Internal Affairs Editor and College sophomore Alexandra Warren said. “The fashion style is really changed and really reflects this generation and the students at this school as opposed to what the magazine used to be like.”

And although Co-Features Editor and College freshman Julie Spinner only joined the staff of (404) this fall, she shared that she can see the change in the magazine, citing an “edgier vibe.”

“I want them to have as much creative reign as possible,” Shulman said of her staff. “I want people to put passion into what they’re doing; so if they care about it, other people will care about it.”

Despite the intensity of the already completed changes of (404), Shulman’s plans for the expansion and evolution of the magazine are far from finished. She shared that she hopes that (404) gains an extensive following on its Instagram, as well as on its recently launched YouTube channel. The magazine’s Youtube channel provides tutorials by Beauty Editor and College senior Sumer Azam on a variety of looks, from a how-to on Elsa’s makeup for Halloween to a Bollywood-inspired look for Diwali.

Shulman also revealed that (404) hopes to create a blog in the upcoming semester to give the Emory community a more traditional fashion and lifestyle outlet. Furthermore, she talked about the possibility of hosting coffee chats or documentary viewings to expand (404)‘s community on Emory’s campus.

“I just want it to only continue to grow,” Shulman said, expressing her dedication and her hopes for the future success of the magazine.

(404) has a new look, a new name and new additions, from the lookbook to the Youtube channel, and its team seems to have no intention of slowing down the magazine’s evolution in the near future. 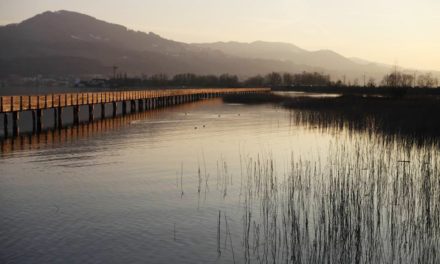 A Ride Through the Alps