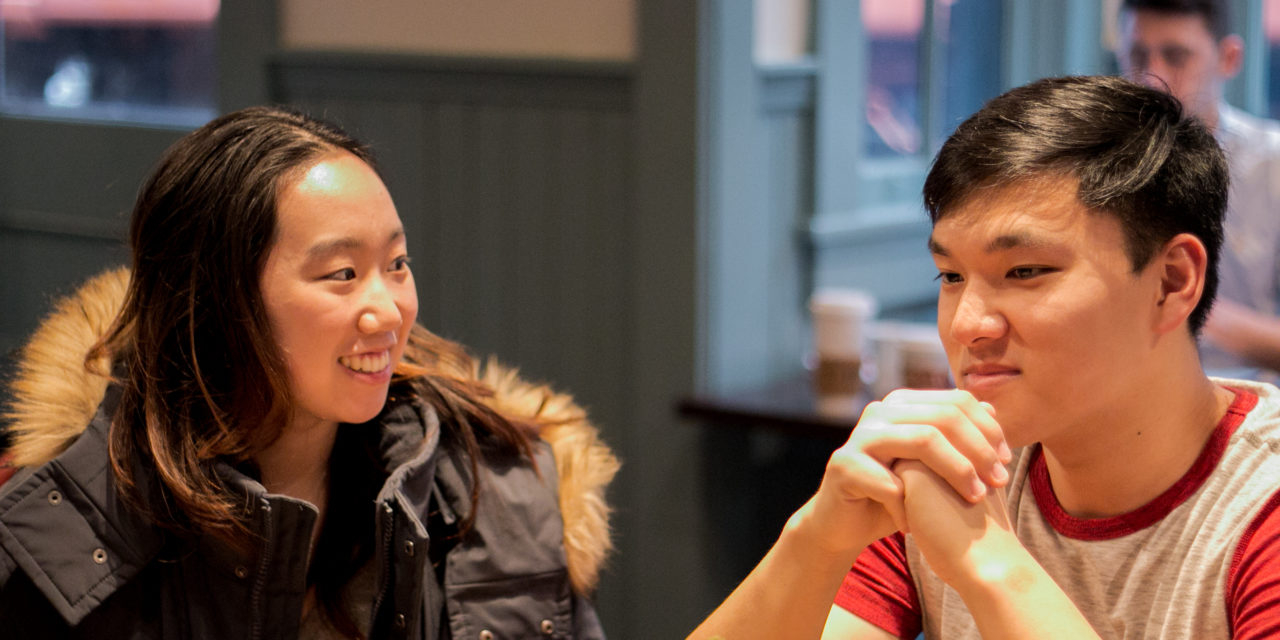 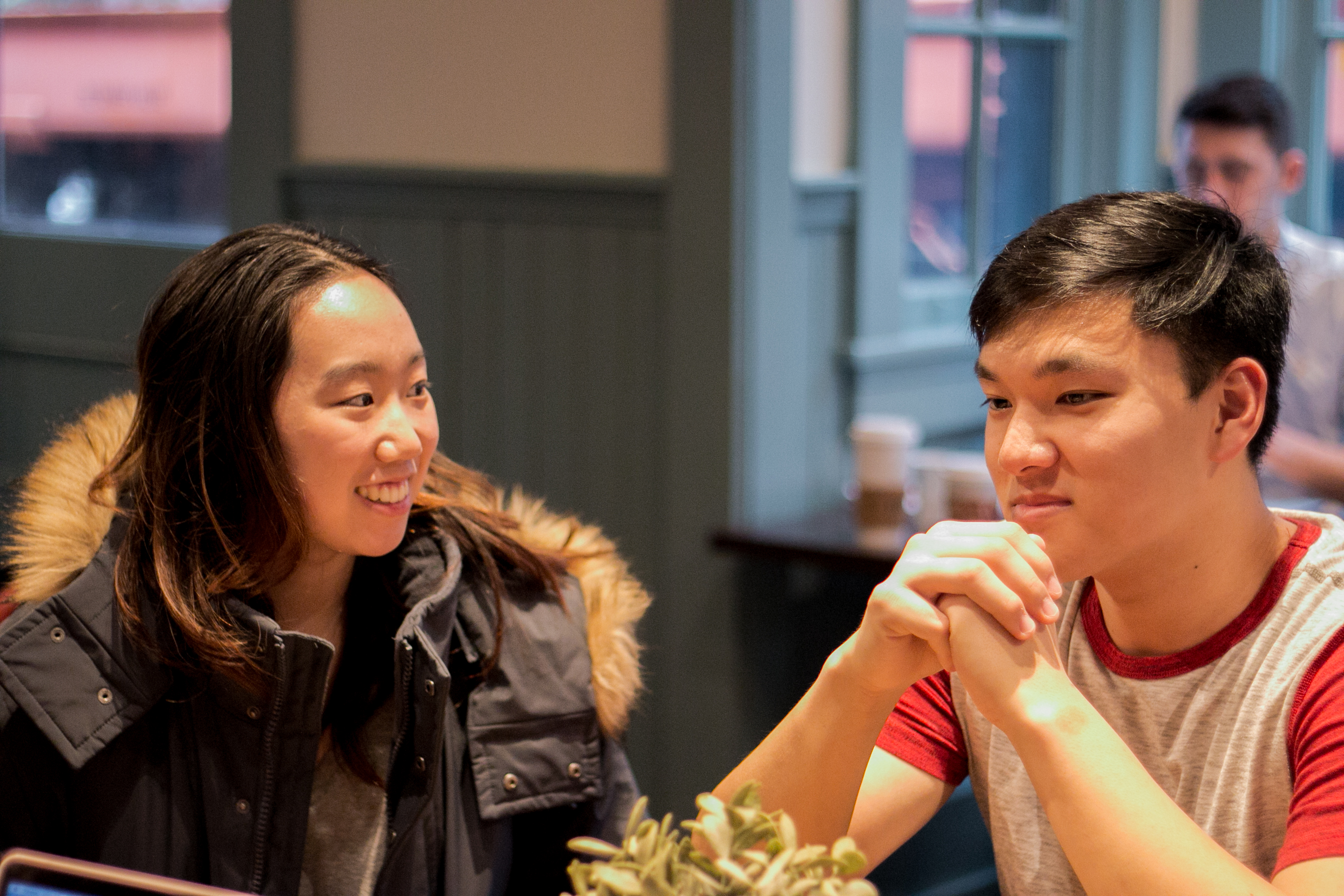 One hour to travel 37.5 miles by shuttle: This is a regular trek for Fiona Bock (18Ox, 20C) and Katherine Ahn (18Ox, 20C), each as halves of their respective Emory-Oxford long-distance couples. Both take the shuttle from the Oxford College campus to the Atlanta campus and back most weekends to spend time with their significant others, who attend school on Atlanta campus.

Ever since Emory College relocated to Atlanta in 1919, some collegiate lovers at Oxford have had to split up or attempt long-distance relationships after their better halves make the move to Emory’s main campus while they remain at Oxford, whether due to an age difference or an early graduation from Oxford. The Wheel sat down with two couples who exemplify the nature of these Emory-Oxford relationships and have found ways to sustain their love despite the distance.

Just two days ago, Paul Park (17Ox, 19B) from Marlboro, N.J., and Ahn from Atlanta celebrated their one-year anniversary. The duo met through a mutual friend at Oxford last year while Park was on-call as a resident adviser (RA). Currently, Park attends classes on the Atlanta campus while Ahn finishes her final semester at Oxford.

The Wheel met with the couple at the Depot by Kaldi’s Coffee, but neither Park nor Ahn ordered anything as Park had reserved a dinner at Canoe Atlanta, a restaurant on the Chattahoochee River, to celebrate of Valentine’s Day. The 37.5 miles between Oxford and the Atlanta campus makes it difficult to meet mid-week on Feb. 14. Park said that Ahn was excited when he told her about the dinner reservation.

“I try to do cute things for her because I’ve never seen my dad do anything cute for my mom,” Park said. “They’re old and Korean and from the ’60s, and I guess cute things didn’t really exist back then.”

Park gave Ahn her anniversary gift last weekend. Ahn pulled up a photo of the gift on her phone — a NARS makeup palette and a mug with pictures depicting special moments in their relationship.

Ahn added that they use FaceTime frequently to feel closer when they’re on separate campuses.

“We each have independent lives, and we’re very understanding of that,” Ahn said. “I’m pre-med and he’s pre-business, which are very different tracks. I’m also very focused on my schoolwork, so I appreciate the distance.”

But even with the FaceTime calls, Park confessed that being far from Ahn is challenging and his school work prevents him from visiting her often.

“I can’t just drive an hour east when I want to see her,” Park said, glancing at Ahn. “FaceTime helps. Sometimes I’ll [call] her in between classes while I’m walking.”

Park said the two watch their favorite TV shows — “Stranger Things,” “Game of Thrones” and a Korean serial titled “Infinite Challenge” — simultaneously from different locations while FaceTiming each other to mimic actually binge-watching Netflix together.

According to Park, FaceTime helps revitalize their relationship and allows them to continue to admire each other from afar. Ahn mentioned that one of the things she likes best about Park is that she can respect him as a person.

“In my past relationships, I haven’t really ever had a role model, [but] I get to learn a lot from [Park],” Ahn said.

Park added he appreciates that Ahn understands his humor.

“It’s nice to have someone who finally listens to me,” Park said. “She makes me really happy, even through all the fights, through everything.”

Park mentioned potential plans to go on a vacation.

“I hope we don’t break up.” Ahn said with a smile, to which Park replied, “The other person is worth it, if you’re willing to sacrifice.”

“There [was] no chance,” Brandon Bierbaum (17Ox, 20C) said of the first time he saw Fiona Bock. “She didn’t know I existed.” In turn, Bock said she hadn’t noticed Bierbaum, who had spotted her at the Williams Gym at Oxford during last year’s finals week. Bierbaum thought he had no shot and told the Wheel that he didn’t try to make a move at the gym.

But thankfully for Bierbaum, he and Bock met at the beginning of last semester at Oxford’s Club Fair.

Bierbaum and Bock said that they began dating sometime last October, and bonded over their shared love of the gym, exercise and Outdoor Oxford, the outdoor activities club at Oxford (Bock is vice president). Bierbaum plays lacrosse on the Atlanta campus while Bock runs cross country at Oxford.

In addition to their athletic interests, the two share a love for films by Japanese film director Hayao Miyazaki. The couple mentioned “Spirited Away,” “Kiki’s Delivery Service” and “My Neighbor Totoro” as some of their favorites.

Like Park and Ahn, Bierbaum and Bock celebrated Valentine’s Day the weekend preceding Feb. 14, citing busy schedules and the distance as obstacles preventing them from meeting on the actual holiday.

“We’re going out to [The Capital Grille] for dinner … I have a gift card,” Bierbaum said, eliciting a chuckle from Bock.

Bock and Bierbaum hesitantly glanced at each other before answering a question about their experience with long distance after Bierbaum’s recent move to the Atlanta campus.

“It’s been going well so far,” Bierbaum said of the semester’s first four weeks. “[But] it will definitely get more tough as the year goes on. I can’t see her during the week because Oxford [is] so far, but we have the weekends.”

Bock added that it’s difficult to find time to be together, but the couple uses FaceTime to talk often.

The couple said they had dealt with distance even before Bierbaum moved to the Atlanta campus because Bierbaum is from Roswell, Ga., and Bock is from Pasadena, Calif.

“He sent me flowers when I got my wisdom teeth out [over winter break],” Bock said.

The couple paused and laughed awkwardly when the question of what they liked best about each other arose.

“It’s really cute to watch him cook,” Bock said, adding, “We’re very similar in a lot of aspects … and that was surprising.”

Bierbaum had more difficulty answering the question, saying that it was “hard to narrow down” because there was “so much” to appreciate. Finally, he admitted that he admires Bock for being a good person.

“I’ve never heard her say anything mean about anyone,” Bierbaum said.

For spring break, Bock and Bierbaum plan to travel to Savannah, Ga., with a group of friends.

For both couples, the long-awaited weekend Oxford/Emory shuttles help close the distance, and FaceTime calls help them cope with being apart until they can reunite in person. Despite the 37.5 miles and the hour-long shuttle rides both couples have each found ways to relay love across campuses.