An explosive Emory volleyball team secured their place in the NCAA Division III quarterfinals with three consecutive sweeps in the Mount Berry Regional from Nov. 9 to Nov. 11. The weekend was marked by a nearly flawless performance from the Eagles, who took down Meredith College (N.C.), Colorado College and the University of Mary Hardin-Baylor (UMHB) (Texas) each 3-0. With its string of victories, the team placed first in contest and earned the chance to fight for a championship title.

The Eagles’ first match against the Meredith College Avenging Angels on Nov. 9 set them up for a strong weekend. The team accumulated a quick lead in the first set, at one point scoring seven times in a row to give them a 10-point advantage. Emory continued to capitalize on Meredith errors to finish out the set 11-25 in their favor.

In the second set, Emory found an early lead. Meredith began to gain momentum and reduced a 10-point lead by the Eagles down to four. While the team led only slightly at 16-20, Emory freshman outside hitter Tara Martin found three quick kills to secure the set for her team 17-25.

The third set was more contentious, with Meredith almost finding the lead for the first time during the match. The scoreline continued to pivot back and forth with neither team getting a solid grasp on the lead. With Meredith trailing behind by two points at 16-18, Eagles’ senior outside hitter Karissa Dzurik rocketed her team ahead with four consecutive kills. The set ended 17-25 in Emory’s favor after the Angels failed to stage a comeback, giving the match to Emory 3-0.

Entering their second match of the regional competition on Nov. 10, Emory prepared to face Colorado College, a hard-hitting opponent.

“Colorado College is really, really good,” Head Coach Jenny McDowell said in a press conference. “When I saw the matchup with them, I had to take a quick pause. That’s how good they are, and that’s how well-coached they are.”

Despite the team’s apprehension heading into the match, they managed to slide ahead 1-2 and went on to maintain their lead in the first set. Despite constant pressure from Colorado, the team answered point for point and kept their energy up. The Eagles took the set 21-25, a much closer margin than from any of the matches against Meredith the previous day. The close score reflected an aggressive playing style from both teams, who found a balance of points from kills and errors.

Colorado took the lead early in the second set forcing Emory to rally from behind, albeit only slightly. A two-point deficit for the Eagles would end up being their most severe of the match. The point total went from 7-9 for Emory to 12-10 for Colorado and then to a tie — a nail-biter if there ever was one. In the end, consistent attacks from Emory allowed them to just barely pull ahead for a set score of 23-25 in their favor.

The third set against Colorado featured some of the most intense volleyball the Eagles have played all season long. Colorado overcame an early Emory lead to tie the score at 14. After battling point for point, the Eagles had the first chance at victory. At 23-24 in Emory’s favor, Colorado both saved themselves and put their opponent in jeopardy with two consecutive points. At risk of dropping the set with the score 25-24, Emory surged ahead. Two kills and an error earned the Eagles the three points they needed to pull ahead by two, winning the set and the match.

“First off, our passers did a great job,” Arles said in a press conference. “It made it really easy for me to distribute the ball, look at what was happening on the other side and find out which hitters were hitting hot.”

Helping to finish off Arles’ sets were Martin and sophomore right side hitter Leah Saunders, both of whom found 11 kills in the match.

The finals of the Mount Berry Regional pitted Emory against UMHB. With an appearance in the quarterfinals on the line, the Eagles sent a message quickly by scoring the first five points of the match consecutively. UMHB responded quickly and aggressively, almost balancing out the score over the next few minutes. Not to be outdone, Emory put themselves back on top and refused to drop, winning the first set 19-25.

The next set saw much more late activity from UMHB, with the team pushing the score into the twenties and looking to contest. Emory clamped down and ended the set 20-25 after scoring another three consecutive points.

Despite a tied score at five early on in the final set, Emory found a six-point streak to all but end the match. The set ended with Emory ahead 14-25, winning them the match, the regional tournament and a spot in the quarterfinals.

The Eagles’ win against Colorado College was the highlight of their weekend and a promising sign to fans. After moving up to No. 3 in the nation, Emory moves forward in the postseason with their energy surging and their heads held high.

Emory will play Ithaca College (N.Y.) in Pittsburgh on Nov. 15 at 5:30 p.m. in the NCAA DIII Volleyball Quarterfinal. 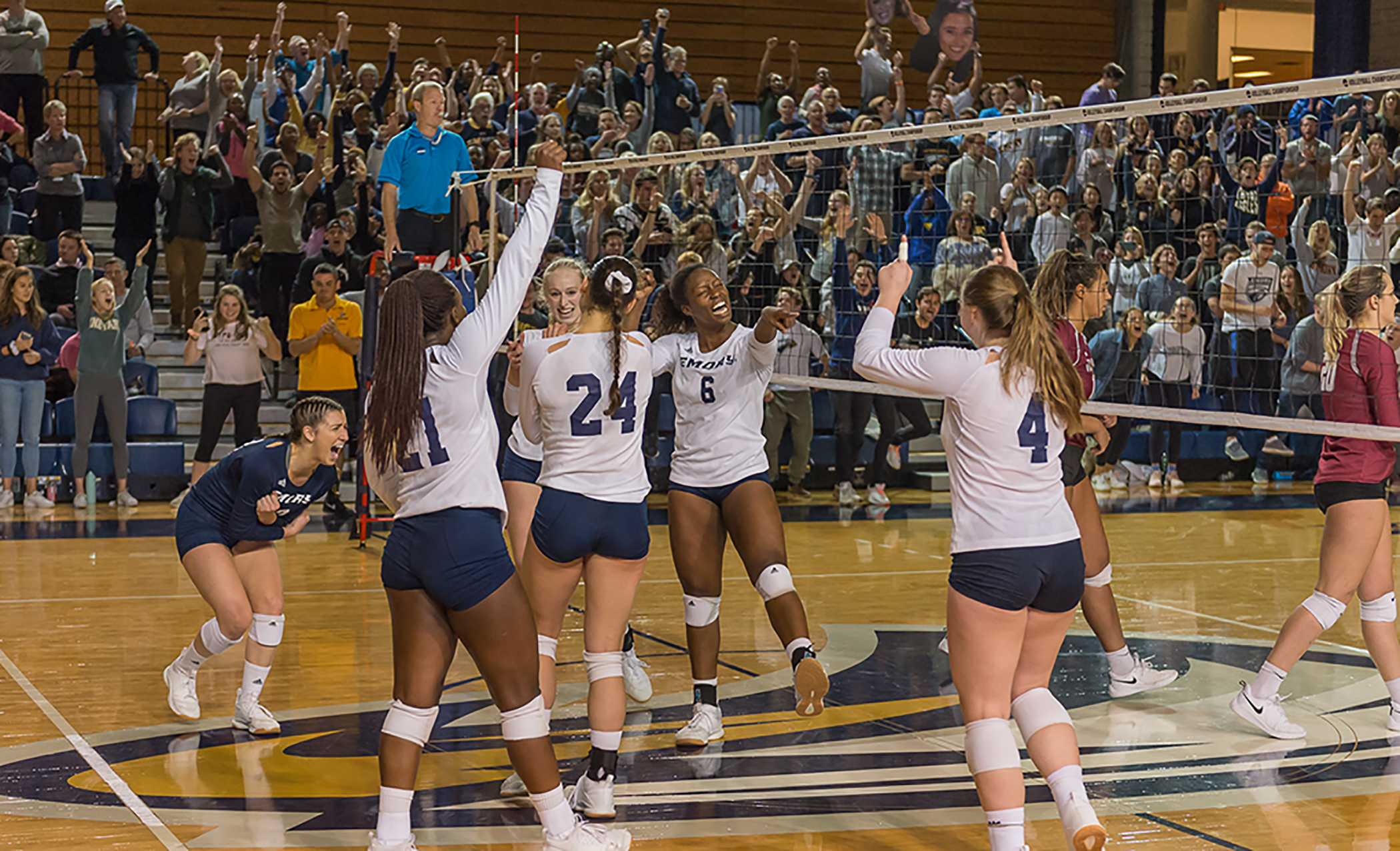 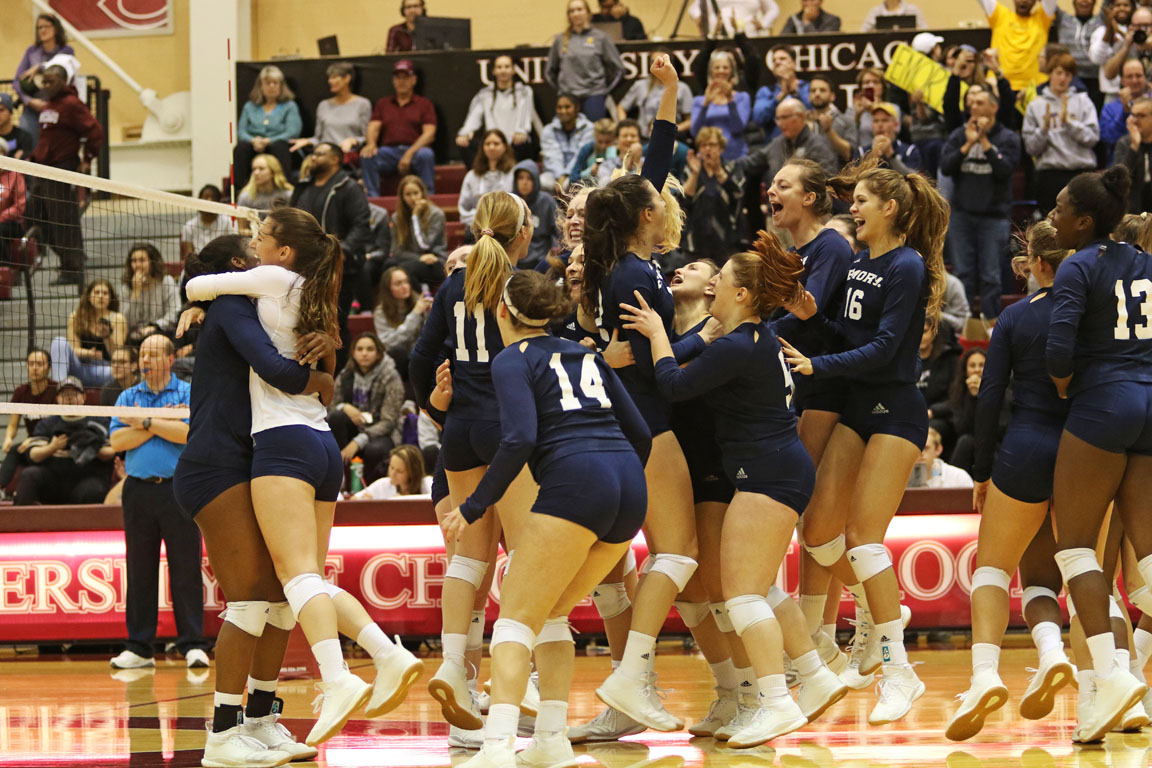