A ‘Gentleman’s Guide’ Worth Following

The stage is set at a funeral: actors enter wearing black from head to toe, singing to warn the audience to leave the show. “For God’s sake, go,” they plead.

This unusual opening song, “A Warning to the Audience” allows “A Gentleman’s Guide to Love and Murder” (GGLAM) to charm its audience from the very beginning because the play refuses to take itself too seriously.

Set in London in the early 1900s, “GGLAM” follows a young man, Montague “Monty” Navarro (Blake Price), as he discovers that he is a member of the D’ysquith family and eighth in line to becoming the earl of Highhurst. Growing up as an outcast from the family and poor all his life, Monty feels he deserves some claim to the vast family fortune and begins killing his family members until he is named the new earl. Amid the crime spree, Monty falls in love with a distant cousin, and becomes entangled in a love triangle between his very married mistress and his soon-to-be wife.

“GGLAM,” which ran at the Fox Theatre from March 13 to 18, is not only quaint and lighthearted, but also an incredible machine of choreographed precision from the first rise of the curtain to the last actor’s bow. Whether an actor is leaning against a wall or picking up a pen, each movement is orchestrated with such care and detail that it’s easy to take for granted. It takes an incredibly skilled and dedicated ensemble to pull off a performance as flawlessly as that of NETworks Presentations’ 2017-2018 “GGLAM” tour cast.

The stand-out actor was by far James Taylor Odom, who conquered the difficult task of playing nine distinct characters. Odom portrayed all the members of the D’ysquith family as they are killed off throughout the show by Monty. Within just the first act, Odom swings from an elderly reverend to a charitable old maid to a young gay socialite, each with a completely different set of hair, makeup and wardrobe. As one character (Lord Asquith D’ysquith Sr.), Odom has a limp; as Reverend Lord Ezekial D’ysquith, he has a slight tremor in his hand; and as Lord Adalbert D’ysquith, he flawlessly embodies the movements of the proud and egotistical earl of Highhurst.

As with any performance, the talent of the ensemble can only take a play so far. What elevates this production from simply a funny show to a touching theatrical experience are its design elements. The set frames the action, creating a second, smaller stage from which characters jump in and out. This contributes to the play’s farcical element, as the audience feels like there is a level of awareness on behalf of the characters and the script. The costume and lighting designs are both beautiful and indicative of each character’s role in the play. The costumes help the audience keep track of the sometimes confusing slew of characters by color coding them: for example, Monty’s mistress Sibella (Colleen McLaughlin) always wears some shade of pink, whereas his fiance-turned-wife, Phoebe D’ysquith (Erin McIntyre), always dons blue.

The lights offer a similar guide for the viewer: the stage is covered in warm washes of purples, pinks and reds before and during romantic scenes, and cold blues and yellows whenever a murder is about to occur. This level of detail in every aspect of production makes this show a deceptively masterful piece of theater.

While touring can be an incredibly wearing experience on actors’ voices, this cast showed no sign of strain. Their vocals were bright, their movements crisp and with an energy that lasted until the last person left the stage after bows.

The cast even took it upon themselves to solve the one string left untied at the end of the musical. Just when everything seems to be working out in Monty’s favor, he discovers another man in a similar position to the one he started out with: a poor man cast aside by the D’ysquith family with plans to regain his lost title.

While the script left this situation unresolved, after bows, Monty and this new character share a moment which foreshadows that Monty strikes preemptively, killing the young upstart before he can return the favor. This was not a part of the original script — it was something the cast chose to add. This level of enthusiasm and excitement to create new things within the structure of the show is refreshing, and clearly represents the spirit of the musical. While Monty Navarro may be giving us a guide to both love and murder, all I have for this show is love.

Village Spot Drumming Along In Need of a Beat 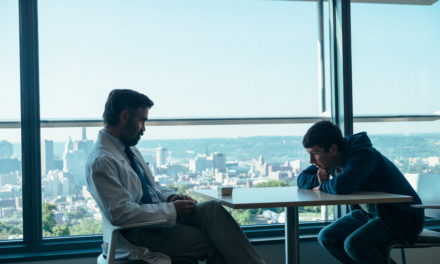 The Nightmarish “The Killing of a Sacred Deer” is Deliciously Shocking