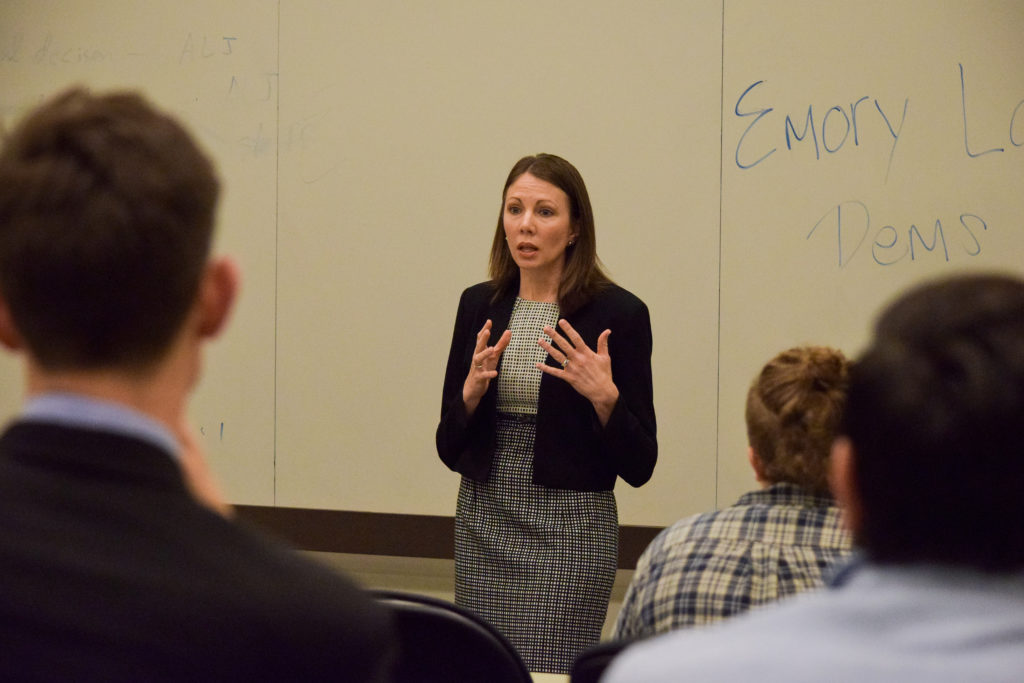 Evans, one of two female Democrats among a pool of six Republicans running for the seat, spoke about her campaign platform and said that she intends to make higher education more accessible, invest in public schools and expand health care in Georgia.

Evans said that the election of a Democratic governor could lead to more fair legislative maps as opposed to the current gerrymandered districts. The current and recent past governors of Georgia are both Republicans.

Evans has held a seat in the Georgia House of Representatives since 2010 but said she felt that her efforts in that role to make changes, especially regarding the preservation and improvement of the HOPE (Helping Outstanding Pupils Educationally) financial aid program, have stalled at the governor’s office. The HOPE program provides scholarships and grants to Georgia high school students pursuing higher education and is funded by the Georgia Lottery.

“I realized I had reached the limits of what I could do in the minority party in the legislature, and if I was going to continue my fight to restore tuition free tech college, I was just going to have to become the governor,” Evans said.

From its inception in 1991 until changes to the program in 2011, the merit-based HOPE scholarship has been awarded to any Georgia high school student with a 3.0 GPA and covered four years of college tuition at any public or private school in Georgia, according to the scholarship website. The program has benefited more than 1.7 million Georgia high school students, according to Georgia Student Finance Commission. The HOPE grant allowed students to attend two years of technical college tuition-free, according to the Georgia Student Finance Commission.

The HOPE program faced bankruptcy as more students qualified for the scholarship, according to a February 2011 Office of the Governor press release. As a result, Georgia Gov. Nathan Deal introduced changes to the HOPE program in 2011 to keep it alive.

An SAT score requirement was added, where students must have a minimum score of 1200. In addition, the GPA requirement was raised from 3.0 to 3.7. To qualify for the HOPE grant, students needed a minimum college GPA of 3.0 to retain the scholarship. The grant covers only a portion of tuition, with the amount varying for each student, according to Georgia Student Finance Commission.

Evans voted against those cuts in 2011 and over the next two years introduced legislation that removed the GPA requirement from the HOPE grant. In 2013 the legislation passed, lowering 3.0 GPA requirement for technical colleges to 2.0 in 2013, according to CBS 46. Evans also helped create a subgrant, now called the Zell Miller Grant, that covers full tuition for top-performing students in technical colleges.

At Emory, 566 students currently receive the HOPE or Zell Miller scholarship, according to University Director of Financial Aid John Leach.

Evans criticized her Democratic opponent and State Rep. Stacey Abrams (D-Atlanta) for co-authoring the legislation that led to the HOPE cuts.

“We’re just different people, and I think you can see that if you look at our paths to public service,” Evans told the Wheel. “[Abrams] ran for office and spent five years with the title of representative before she introduced a single piece of legislation. I’ve always been looking for the place where I could do the work, not rack up titles.”

Evans emphasized the importance of investing in public education throughout Georgia because class sizes are too big, budgets are too low and teachers are overburdened.  She also plans to expand Georgia’s Medicaid.

Evans also emphasized the need for transportation infrastructure improvements throughout Georgia. She said the Georgia government should work to connect rural areas to Atlanta and to one another.

“None of this is easy — investing in infrastructure, schools, making higher education more accessible, expanding healthcare,” Evans said. “But none of these things are out of reach if we are deliberate and focused.”

Evans told the Wheel she sees political organizations such as Young Democrats at the undergraduate level and law school as a great opportunity to get involved in politics and credited the Young Democrats of the University of Georgia for kick-starting her career in politics.

Sydney Kaplan (19L) said that she was inspired by Evans’ story of going to law school, working for a law firm and then going into public service.

“As a future female lawyer, I hope to follow a similar path, and I hope she is able to take the next step in her career as the first female governor of Georgia,” Kaplan said.

Matt Freifeld (20L) said that he appreciated the opportunity to hear Evans speak.

“It was awesome to hear about the goals of potentially the next governor of Georgia,” Freifeld said. “It made me confident for November 2018 regardless of who wins the primary.”